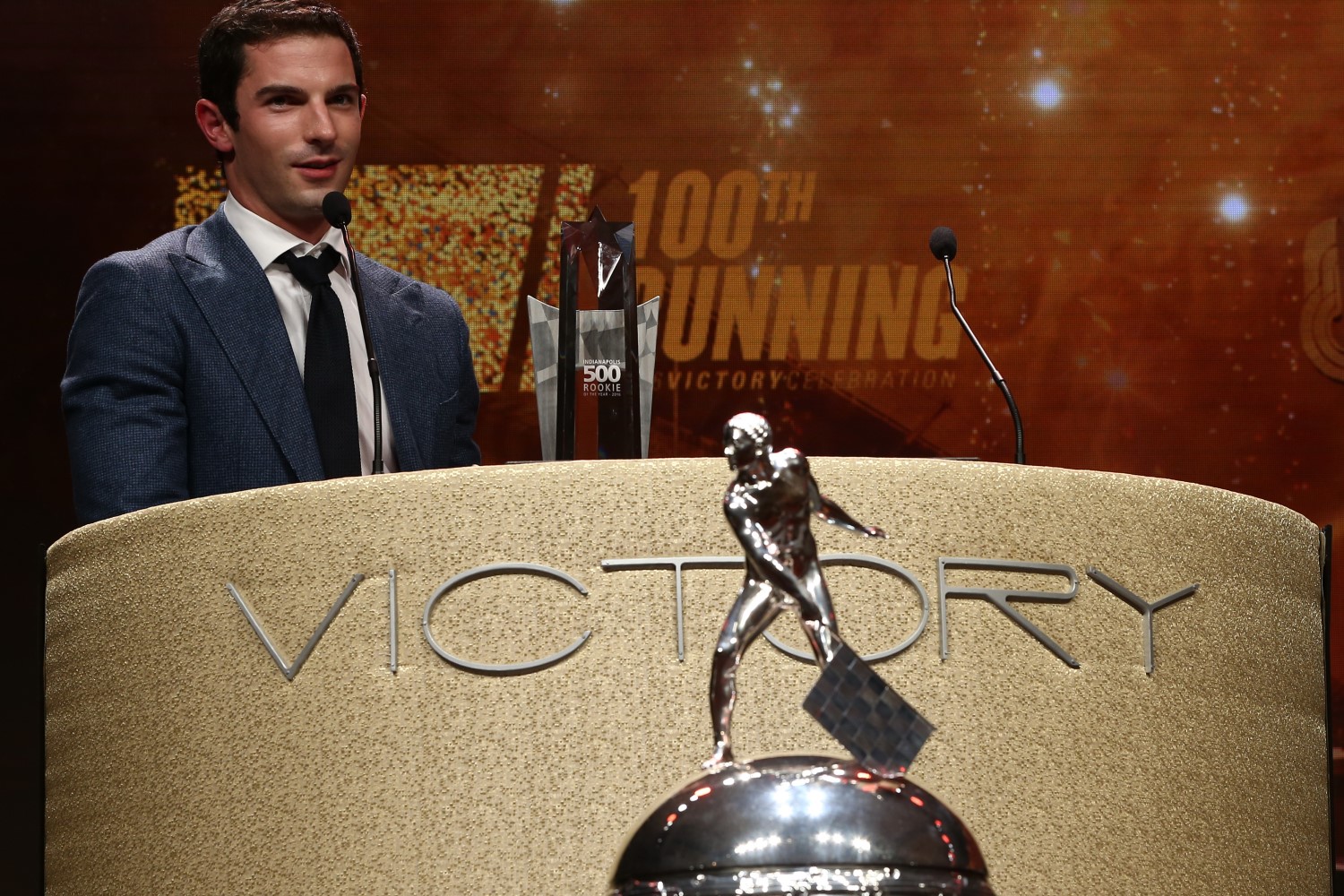 In February, Alexander Rossi was poised for a season on the sidelines as his Formula 1 dreams evaporated.

Now he's got 2.5 million reasons to be glad it happened.

The 24-year-old took home the lion's share of the $US13m prize pool with his unlikely victory the 100th running of the Indianapolis 500 in his first start in the iconic race.

In a speech at the event's Victory Banquet, during which he fought back tears, Rossi expressed his thanks to team owners Bryan Herta and Michael Andretti for a career-changing opportunity.

"I've known them for a very short period of time, but what we've accomplished in a short three months together has been fantastic, and I look forward to what we're able to accomplish in the future," Rossi said

"To Bryan and Michael, thank you for giving me this opportunity. To come back and race in America was not something that wasn't necessarily on my radar, but now that I'm here – and even from the first race in St Pete I told you how much I enjoyed it, way more than I ever thought I was going to.

"It's because of you guys that I was able to get here and to experience this and it's opened my eyes to a whole new thing, and I'm beyond appreciative of that."

In stark contrast to his last race win prior to the ‘500 – a GP2 Series support race at last year's sparsely-attended F1 Russian Grand Prix – Rossi clinched the biggest victory of his career in front of a sold-out crowd of in excess of 350,000 people which packed out the historic Indianapolis Motor Speedway.

"Thank you to the fans who made it the greatest Indy 500 that we've ever had," Rossi added.

"I know there's a huge responsibility in front of me; it's a great honor and privilege to be your winner and I will do everything in my ability to promote this going forward and make the 101st the next-best one."

It caps off an incredible three months for the American, who had spend much of the last decade living in Europe pursuing a drive in F1.

After getting his maiden grand prix start last year with Manor, he lost out on a race drive with the team this year after his sponsorship dowry was trumped by Indonesian government-backed racer Rio Haryanto.

"The reason I went to Europe was I won a test with BMW Sauber F1 after winning the Formula BMW World Finals in 2008. Went over there, started racing in Europe.

"I got involved with, at the time it was Team Lotus (as) kind of a junior development driver, started to learn the world of F1. Kind of stayed in that kind of role all the way through 2014 when I got an opportunity to be the reserve driver for Manor Marussia or Marussia at the time.

"2014 was an incredibly challenging year for a lot of different reasons. At the end of the year I didn't actually know what I was going to do.

"It was the beginning of ‘15 when I first met Michael (Andretti, IndyCar team owner) in an owner and driver capacity. We talked about potentially putting something together for 2015.

"I got an opportunity to go back to Europe and race in GP2. I took that chance. It resulted in doing five Grand Prix at the end of last year, as well as finishing out GP2."

"Things didn't go quite according to plan for 2016 in Europe."

However, with reports Haryanto is struggling to find the funding to keep hold of his seat at Manor, Rossi hosed down speculation he may be back in F1 before the year is out.

"I'm (Manor's) reserve driver. I sit around and pretend to look important," he joked. "There is no driving involved. I drive to the track in a rental car!

"I can certainly say I'm not in a Grand Prix car anytime soon." Will Dale/Fox Sports