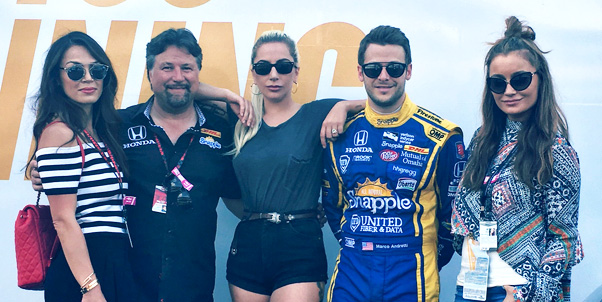 Global music and celebrity icon Lady Gaga will bring her high-voltage star power to the 100th Running of the Indy 500 presented by PennGrade Motor Oil. To help kick off today's historic edition of the largest single-day sporting event on the planet, she will join Mario Andretti for a high-speed thrill ride known as the "Honda Fastest Seat in Sports."

"Travel to any corner of the globe and people know exactly who Lady Gaga is," said Indianapolis Motor Speedway President Doug Boles. "Her talent, personality and bold style have helped her become a transcendent star and we're so excited to host her for the 100th Running of 'The Greatest Spectacle in Racing.' The Indy 500 is a worldwide sporting celebration and today's event is going to be an impressive and inspiring display of speed and thrilling competition."

Lady Gaga and Andretti will roll off with the field of 33 drivers at today's race in a custom-built two-seat Indy car. They will follow four parade cars while leading the official Pace Car on three parade laps leading up to the most famous race in the world. Once Andretti and Gaga exit the circuit, the field of 33 cars will take the green flag.

The race will air live on ABC at noon ET with pre-race coverage beginning at 11 a.m. ET.

The two-seater ride with Lady Gaga takes place within the broadcast window. Lady Gaga will take the place of Keith Urban, who was unable to participate after injuring his back.

Lady Gaga came to prominence following the release of her debut studio album The Fame (2008), which included the hits "Just Dance," "Poker Face," and "Bad Romance" and sold over 15 million copies worldwide. She is well recognized for her outré sense of style as a recording artist, in fashion, in performance and in her music videos. Her contributions to the music industry have garnered her numerous achievements including five Grammy Awards amongst fifteen nominations, two Guinness World Records, a record setting thirteen MTV Video Music Award nominations and the estimated sale of 23 million albums and 64 million singles worldwide.

Billboard named her both the "2010 Artist of the Year" and the top selling artist of 2010. Her third studio album, Born This Way, broke the iTunes record for the fastest rise to the # 1 on release day. The singles from the album, including "Born This Way," "Judas," "The Edge of Glory," "YoÃ¼ and I," and "Marry The Night" have sold a combined total of more than 9 million copies in the U.S. alone.

Gaga was named "Most Powerful Woman in the World" by "Forbes" in 2011 and was included in the "Time" annual "The 2010 Time 100" list of the most influential people in the world. Lady Gaga was the first artist to gain over 1 billion views on YouTube and has more than 59 million Twitter followers.

Mario Andretti won just about everything: The Indy 500, Daytona 500, a Formula One World Championship and the Pikes Peak Hill Climb. He won the IndyCar Championship four times and was a three-time winner at Sebring. He won races in sports cars, sprint cars and stock cars – on ovals, road courses, drag strips, on dirt and on pavement. He won at virtually every level of racing since he arrived in America from his native Italy at age 15. Assessing his legacy is easy: He drove the careers of three men. He drove with a passion and joy that few have equaled, and he won. Mario Andretti took the checkered flag 111 times during his career – a career that stretched five decades. He retired from active driving at the end of 1994. Now a successful businessman off the track, Mario serves as spokesman, associate and friend to top executives around the world.