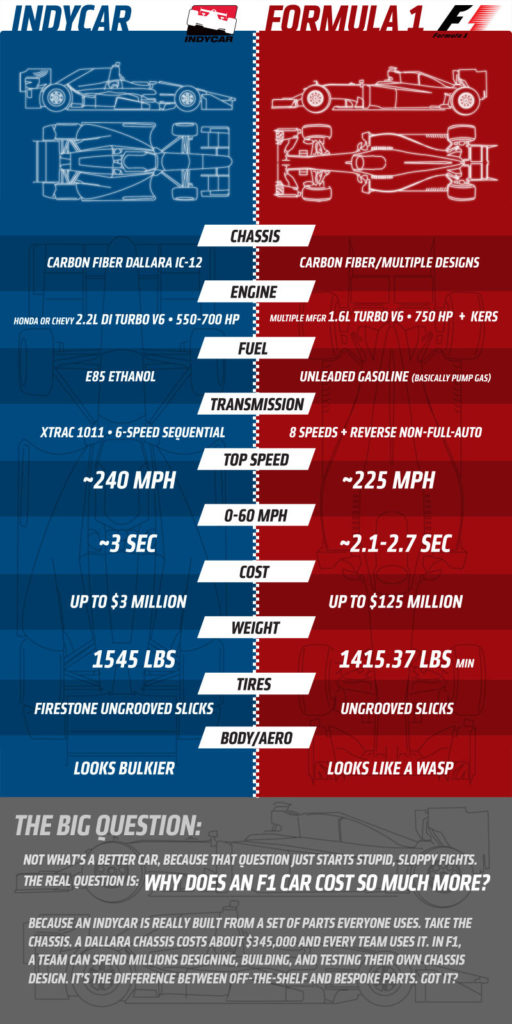 Both IndyCar and Formula One are having their premier races of the year this weekend. IndyCar is in Indianapolis, where it all began in 1911. Formula One is on the streets of Monaco, which hosted its first race in 1929. Both series feature open wheel, open cockpit race cars. So what’s the difference?

Both use V-6 internal combustion engines. IndyCar engines are 2.2 liter units that run on E85 ethanol while the 1.6 liter Formula One engines run on unleaded pump gas. IndyCars have a top speed of 240 mph. Formula One cars top out at about 225 mph.

But here’s the real difference. An IndyCar complete with chassis, engine, transmission, brakes, and tires costs about $3,000,000. A top tier Formula One car can cost as much as 50 times more. Formula One teams never disclose their actual costs, but numbers north of $200,000,000 have been bandied about in the sport for years.

If that surprises you, what should be even more surprising is that the teams have been complaining loud and long about how expensive Formula One is for decades. The teams are now forbidden to test their cars more than a few days a year to cut costs. Time spent in the wind tunnel is severely restricted to cut costs. And yet costs go up and up and up every year.

What makes a Formula One car so expensive? IndyCar uses parts that are basically off the shelf components — you can get your engine from either Honda or Chevrolet. The chassis are all made by Dallara and are all the same.

There are different aerodynamic packages for different tracks — low downforce for places like Indianapolis where top speed is critical, high downforce for road courses. But they are the same for everybody. For IndyCar, the emphasis is on the drivers, not the cars.

Formula One is just the opposite. It is all about the cars. From the team’s perspective, drivers are just components to be rented. The one item that drives up costs more than anything is aerodynamics. Formula One cars are basically inverted airplanes.

The shape of the car is designed to suck the car down onto the track surface. At top speed, as much as 5,000 lbs of downforce can be added to the cars. It is often said that if you could get a Formula One car upside down in a tunnel at speed, it would stick to the ceiling.

Teams spend cubic dollars to improve aerodynamic downforce. Since their time in wind tunnels is restricted by the rules, they use computational flow dynamics software to simulate real world testing. Each team chews through petabytes of data every year looking for any advantage that might make their car a tenth of a second per lap faster on track.

Three years ago, Formula One elected to “green" its public image. Even though it puts millions of pounds of carbon emissions into the atmosphere each year flying to races around the world — each team brings up to 600 tons of equipment to each race, including elaborate mobile hospitality suites for sponsors and local muckety mucks — the decision was made to adopt an all new hybrid powertrain to fool the public into thinking the sport is actually concerned about global warming.

The engines are good for about 550 horsepower. Another 200 horsepower comes from an electric motor powered by a battery, regenerative braking, and a device that makes electricity from the heat of the engine. The combination requires insanely complex computer software to manage the whole process. Now in its third season, the new powertrain is rumored to have cost Mercedes Benz a half billion dollars to develop. So much for saving money!

So what’s the difference between IndyCar and Formula One? A megalomaniacal focus on the car, the car, the car. The fans be damned. Formula One viewer ratings are plummeting, but the sport continues its single minded march to oblivion, leaving dollar bills swirling in its wake.

A Formula One car cost 5o times more than an IndyCar. Is the racing 50 times better? No, it is not. Not by a long shot. Steve Hanley/gas2.org