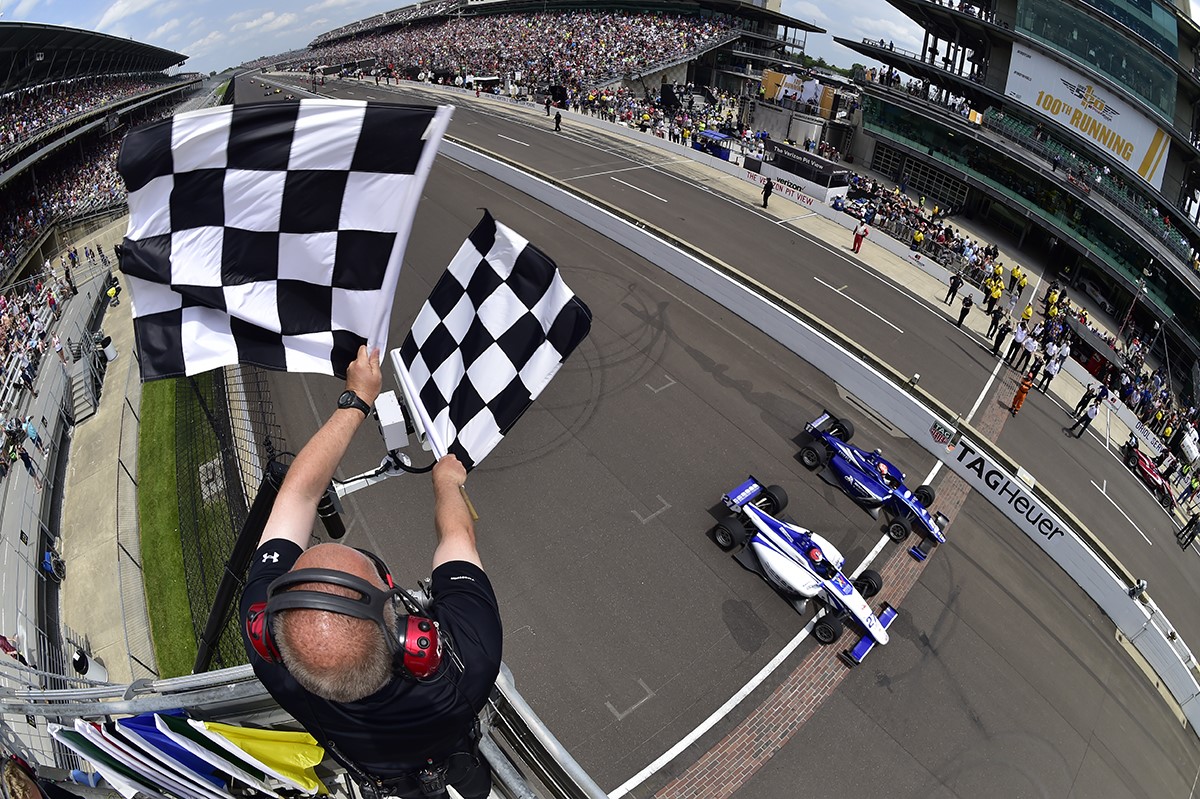 Dean Stoneman, driving for Michael Andretti’s Andretti Autosport team, this afternoon thrilled a massive and enthusiastic Carb Day crowd at the Indianapolis Motor Speedway by edging fellow Englishman Ed Jones to the yard of bricks and the checkered flag to win a gripping Mazda Freedom 100 Presented by Cooper Tires. Stoneman’s victory was the closest in the history of the hallowed Brickyard – just 0.0024 of a second – besting the previous mark set in 2013 when Ireland’s Peter Dempsey shaded three others in a four-wide finish to the Freedom 100.

Championship leader and polesitter Jones had to be content with second for the Carlin team, while Canadian Dalton Kellett claimed his best-ever finish, third, also for Andretti Autosport.

After rain midway through qualifying yesterday caused the grid to be set according to championship points, today’s race, run in hot, dry and muggy conditions, took a while to get going following an initial wave-off of the start due to some debris on the race track and then an incident even before the completion of the first green-flag lap when title contender Kyle Kaiser (Juncos Racing) hit the wall on the exit of Turn Four.

It was worth the wait. The action was hot and heavy when the green flags waved again with seven laps in the books as Stoneman, who had started fifth, drove around the outside of Carlin’s Felix Serralles in Turn One, then dived to the inside of Jones as the leaders sped into Turn Three. Cars were running two and three abreast in the early stages, with Jones and Stoneman embroiled in a titanic battle for the lead. The advantage seemed to shift regularly as the leaders exchanged places on numerous occasions, although almost always it was Stoneman who managed to hold a fractional edge at the start/finish line.

Behind, a strong run by RC Enerson (Schmidt Peterson Motorsports with Curb-Agajanian) was interrupted when he picked up a puncture on Lap 13 after battling side-by-side for position with Zach Veach (Belardi Auto Racing) in Turn Two. Shelby Blackstock (whose mom, country singing star Reba McEntire, had given the command to start engines), driving a third Andretti Autosport entry, fought his way into contention, rising from 10th on the grid to third by Lap 13, and soon was followed by Colombian Juan Piedrahita, who had started 13th in his Team Pelfrey Dallara-Mazda.

The breathless action continued until Lap 30, when Urrutia lost control and spun at the exit of Turn Two, thankfully without making significant contact with anything else.

Stoneman and Jones continued their battle at the restart, whereupon Piedrahita breezed past Jones on the outside of Turn One on Lap 35, then battled side-by-side with Stoneman for the lead. Just as the race was building toward its crescendo, Korea’s Heamin Choi (Schmidt Peterson) spun in Turn Two, again without making contact, but it was enough to bring out the yellow flags one more time and set up a one-lap sprint to the checkered flag.

Piedrahita’s hopes of a maiden victory were dashed when he inadvertently made light contact with the rear of Stoneman’s car as they accelerated off Turn Four toward the green flag, then veered dramatically to the inside as he fought to regain control.

Jones sling-shotted to the outside of Stoneman at Turn One to grasp the lead, but only as far as Turn Three where Stoneman again used the draft to draw alongside his rival. The two Englishmen ran side-by-side through Turn Four before, with the crowd on its feet, Stoneman edged Jones to the finish line by barely the length of a toenail.

Kellett ousted teammate Blackstock from third on the run to the checkers, with Hargrove fighting his way to fifth ahead of Serralles, Alberico and a disappointed Piedrahita

Cancer survivor Stoneman’s second victory in a row – he triumphed also two weeks ago at the Indianapolis Grand Prix road course – has vaulted him from fifth to second in the points table. He now trails Jones by 185-156. The Indy Lights Presented by Cooper Tires contenders will compete next at Road America in Elkhart Lake, Wis., with two races schedule for the weekend of June 25-26

Dean Stoneman (#27 Stellrecht-Andretti Autosport): “From five years ago, being in a hospital bed to winning here has been a long road. To get a win on a close finish like that with Ed is amazing. I led most of the race so I knew I had a good race car and could position it where I wanted, but there was nothing else I could do to gain speed on the straight. It was going to be what it was. This will be a great memory, that I came here and won on the road course and then again on the oval, especially during the 100th running of the Indy 500, especially being in front of the kind of crowd that was out here today. It really is a dream come true.

Ed Jones (#11 Jebel Ali Resorts and Hotels–Carlin): “Once Dean got past the first time, I decided to bide my time so I spent the majority of the race waiting for the last few laps. But the safety car changed things up. I got a run on him going into Turn One and I kept it flat the whole way. I didn’t realize how close we were and I got a little bit loose on the exit. I wasn’t sure I had enough room and I know it was pretty close. I feel as though if I’d gone to the outside maybe I would have held a bit more momentum and been able to hold him off. The team gave me a car to win the race so to lose it by such a small margin – I really can’t think of anything worse."