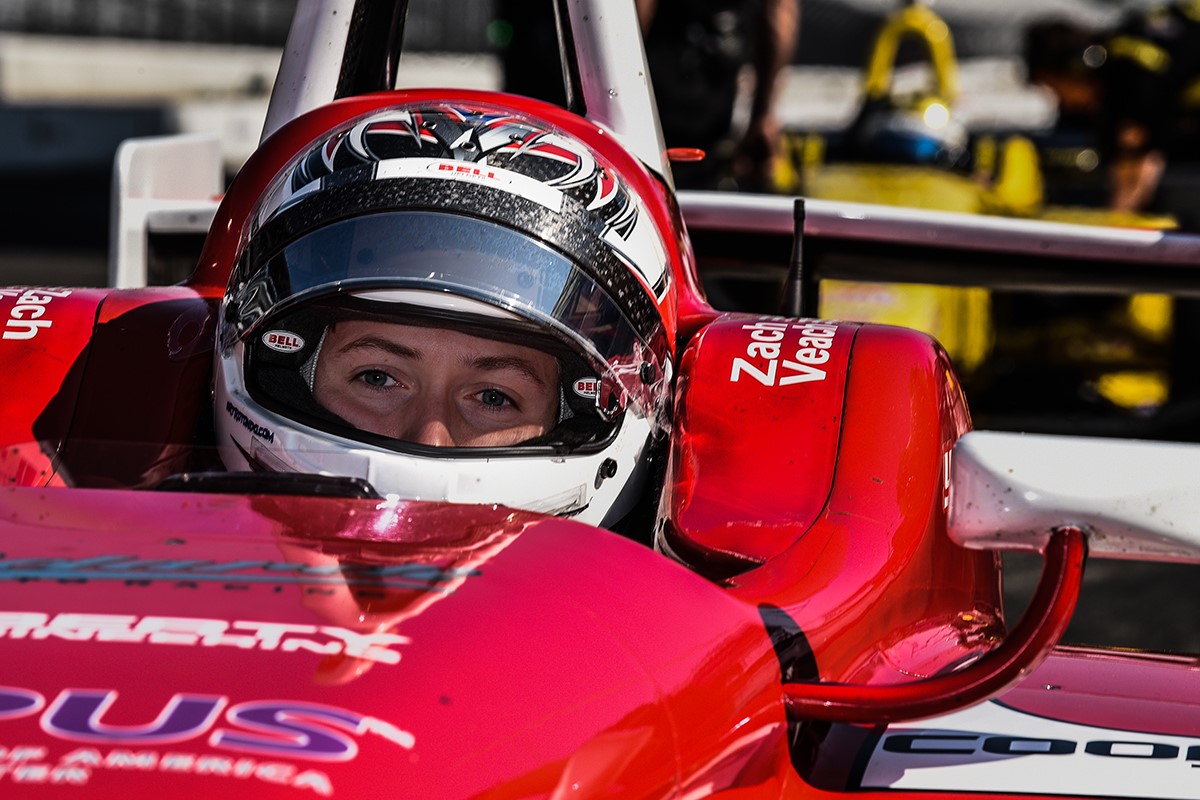 Zach Veach created a little bit of history this morning during a one-day Indy Lights Presented by Cooper Tires test in preparation for Friday’s Mazda Freedom 100 Presented by Cooper Tires, unofficially recording the first-ever 200 mph lap for an Indy Lights car around the hallowed 2.5-mile Indianapolis Motor Speedway oval. Veach, from Stockdale, Ohio, took full advantage of his prior experience – he finished third in the 2014 Freedom 100 – as well as perfect early-morning weather conditions, a fresh set of Cooper tires and a huge draft to turn a lap in his No. 5 Belardi Auto Racing Dallara-Mazda IL-15 of just 44.6751 seconds, an average speed of 201.455 mph.

The existing track record was set in qualifying last year by Ethan Ringel at 45.4854 seconds (197.866 mph), marking an impressive oval debut for the new Dallara-Mazda package. Ringel qualified on the pole for Schmidt Peterson Motorsports with Curb-Agajanian with a two-lap average of 197.684 mph.

Veach’s effort remained comfortably the fastest of the day. For the remainder of the opening 90-minute test session, as well as an additional 90-minute test later this afternoon (after the Verizon IndyCar Series contenders had taken their turn on track in preparation for Sunday’s 100th Indianapolis 500), lap times for the fastest cars remained consistently in the mid-45-second range.

Californian Neil Alberico (Carlin) vaulted to fourth fastest this afternoon, fifth overall on the day, in the closing minutes with a lap at 45.6089 seconds (197.330 mph) to edge Englishman Dean Stoneman (Andretti Autosport) on 45.7147 seconds (196.873 mph).

Zach Veach (#5 Belardi Auto Racing): “To be the first Indy Lights driver to go over 200 mph, then to be P1 in no-tow times and tow times for most of the afternoon is great. I was beat in the tow times right at the end by my teammate. I never look at the speeds around here, so when I did the quick lap this morning and came in to the pits, I looked up at the pylon, saw 201 and had to ask if that was the average! The lap felt quick, but I didn’t know how quick this car needed to feel to be quick. We were working on qualifying setup this morning, so I set that on my second lap. It had to have had a tow in it somewhere, but we’re still in the 199s in no-tow times, so to be close to 200 mph on our own really speaks to how good our Belardi cars are. I’ve never felt so good going into a Freedom 100."

Felix Rosenqvist (#14 Karlsson Svensson Projekt-Belardi Auto Racing): “The last time I felt so excited driving a race car was when I was in Macau for the first time, in 2010. After that, nothing really seemed special until I came here. It’s just a fantastic track. It’s awesome to drive here. You have to be so committed turning in to the turns. The track was much more difficult in the afternoon but we were able to work on race trim and we learned a lot. I feel really good running on my own but I’m still struggling a little bit in traffic and I had a really good tow on the fast lap. Running in the pack is difficult, you have no downforce at all. It’s going to be a very hectic race. I was behind a group of cars and I wanted to see how quick I was going, and I saw something like 210 mph. I think my previous land speed record was 190 mph so I beat it by quite a lot! If you have a good car and the car makes you comfortable, it doesn’t take much time to get up to speed."