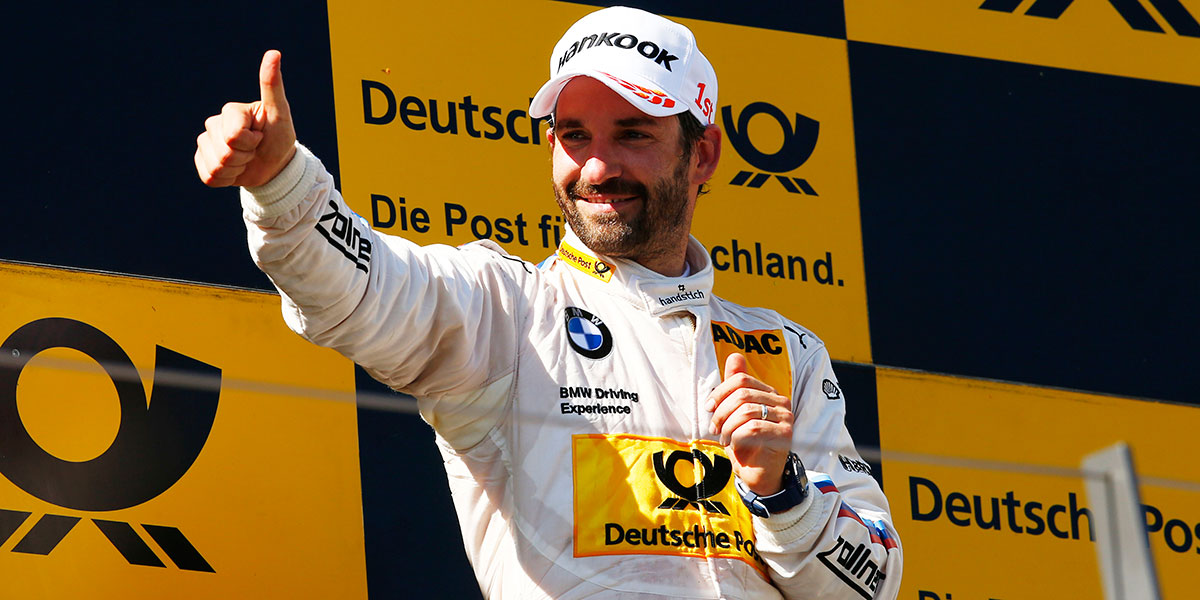 What a satisfaction for Timo Glock. After his post-race disqualification at Hockenheim, the BMW driver crowned an extremely strong DTM weekend at Spielberg with an impressive win on Sunday. On the second lap, the 34-year-old had overtaken Jamie Green for the race lead and held on to it until the finish. During the prize-giving ceremony, pole sitter Green celebrated his first championship points of the season for finishing third.

In the final third of the race, the Brit had to let his fellow Audi driver Mattias Ekstrom pull away, the Swede having made great progress at the Red Bull Ring from eleventh place on the grid to finish second.

"A perfect race, a nearly perfect weekend. This morning, I was still very annoyed after my mistake in qualifying, but this victory is all the more beautiful for it," a champagne-soaked Glock commented after the prize-giving ceremony. It was the brilliant ending of a strong weekend for BMW, during which the 30,500 spectators at Spielberg once again got to see excellent motor racing action.

Glock had started the race from third place on the grid and immediately showed his ambitions. On the long straight following the first corner, he went past team-mate Antonio Felix da Costa and then had his eyes set on Jamie Green. The Brit had successfully defended his pole position at the start, but had nothing to put against Glock’s attack on the second lap. With apparent ease, the yellow BMW moved past the orange Audi in the Remus corner. "I knew I had to risk everything in my first stint. I put it all on one card and I won," Glock reported about his first laps. While he pulled a decisive gap out in front, there was a fierce battle for the following positions behind him.

Up to the first pit stops, the drivers in second to 22nd place – Nico Muller retired on lap two after a collision with Robert Wickens, who incurred a drive-through penalty for his move – staged a highly entertaining battle. All cars were permanently involved in duels with no gap ever bigger than one second. A fact from which Mattias Ekstrom took the maximum benefit. In his first stint, he pushed really hard and overtook Mike Rockenfeller, Bruno Spengler and Marco Wittmann in that order. While the first drivers came in for their pit stop after 14 laps, the Swede stayed out on track until lap 28. The tactic worked as planned: as he rejoined the race after his stop, he had also left Augusto Farfus, Tom Blomqvist and Maxime Martin behind me and dealt with second-placed Green soon after that.

"This second place feels a little bit like victory. I also had luck, started in the middle of the pack, but I didn’t have any fools around me. Therefore, my cars was still in one piece after one lap, so that I was able to attack," Ekstrom summed up. Although he had failed to turn his pole position into a race win, Green was happy, too: "Third place was all I could manage today, especially as I also had to deal with technical issues."

One duel also had decisive character in the battle for the podium positions. Antonio Felix da Costa had lost a few places in the first half of the race, but was close to a top three result again. On lap 24, he already seemed to have taken third place from Edoardo Mortara, but the latter refused to give in and touched the rear of his opponent’s car. Both slid into the gravel trap, where Mortara’s race came to an end. Visibly disappointed, Felix da Costa crossed the finish line in 21st place.

While BMW extended its lead in the manufacturers’ standings with six of its drivers in the top ten, Mercedes-Benz had a weekend to forget. After a poor qualifying performance in the early afternoon, Daniel Juncadella ended up as the best-placed driver of the brand in the race on Sunday with a twelfth-place finish. Thus, only Paul Di Resta scored points for the Stuttgart-based manufacturer at the Red Bull Ring with his seventh place on Saturday, but he was still able to defend his lead in the drivers’ standings. After four races with four different winners this season, the Scot is leading with 43 points from Mortara with 40 points and Glock and Martin, both with 37 points.

There are still seven race weekends remaining in the 2016 season and already now, tension is almost at its maximum. In a fortnight already, Mercedes-Benz gets the chance to strike back. From June 3 till 5, the Lausitzring will serve as the venue for the third DTM race weekend.