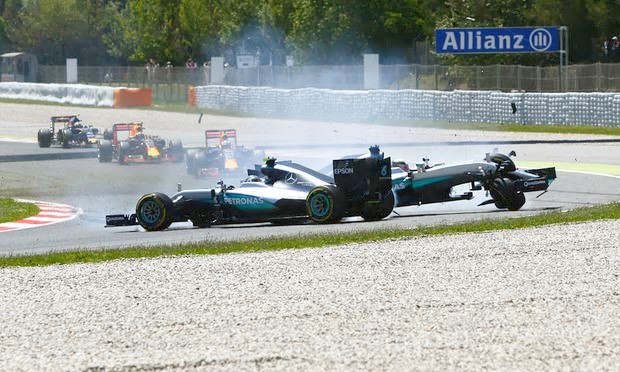 (GMM) The sensational clash of Mercedes' teammates and championship foes in Barcelona made clear a "new Nico" Rosberg will no longer be pushed around.

That is the view of three former F1 drivers, commentating on the controversial crash between the German championship leader and Lewis Hamilton.

Niki Lauda is steadfast in his view that the reigning triple world champion was to blame.

"I am annoyed at the question of who has what percentage of blame — 70 per cent here and 30 per cent there," the Mercedes team chairman told Auto Motor und Sport.

"It is clear that Nico tried to overtake on the wrong side. Why wrong? Because any professional driver at the front and suddenly feeling a power position will try to defend his position, logically on the inside.

"In 2015, Lewis' attack would have worked but those days are gone and the new Nico drives like Lewis or Vettel. Therefore, the collision occurred," Lauda said.

Christian Danner, a former German F1 driver, agrees that Sunday was a sign of a "new Nico".

"I am glad that Nico didn't wave Lewis past, demonstrating the new Rosberg," he said.

"Lewis must understand he can no longer intimidate his teammate with such maneuvers of 'Here I come, make room for me!' As for who is to blame, I would say it's 50-50 — Nico a bit too hard, Lewis too trusting," Danner added.

Martin Brundle, now a respected British commentator, thinks Rosberg should have left Hamilton some room, but he also thinks the champion was in a hurry to re-pass him.

"Lewis was shocked that he lost the lead at the first corner, which is why he wanted to get it back at the first opportunity.

"Nico was distracted by being in the wrong engine mode, which is why his defense was so hard. But maybe that's the new Nico," Brundle added.

"Two years ago he would have settled for second place. Now he's turned into a winning machine."