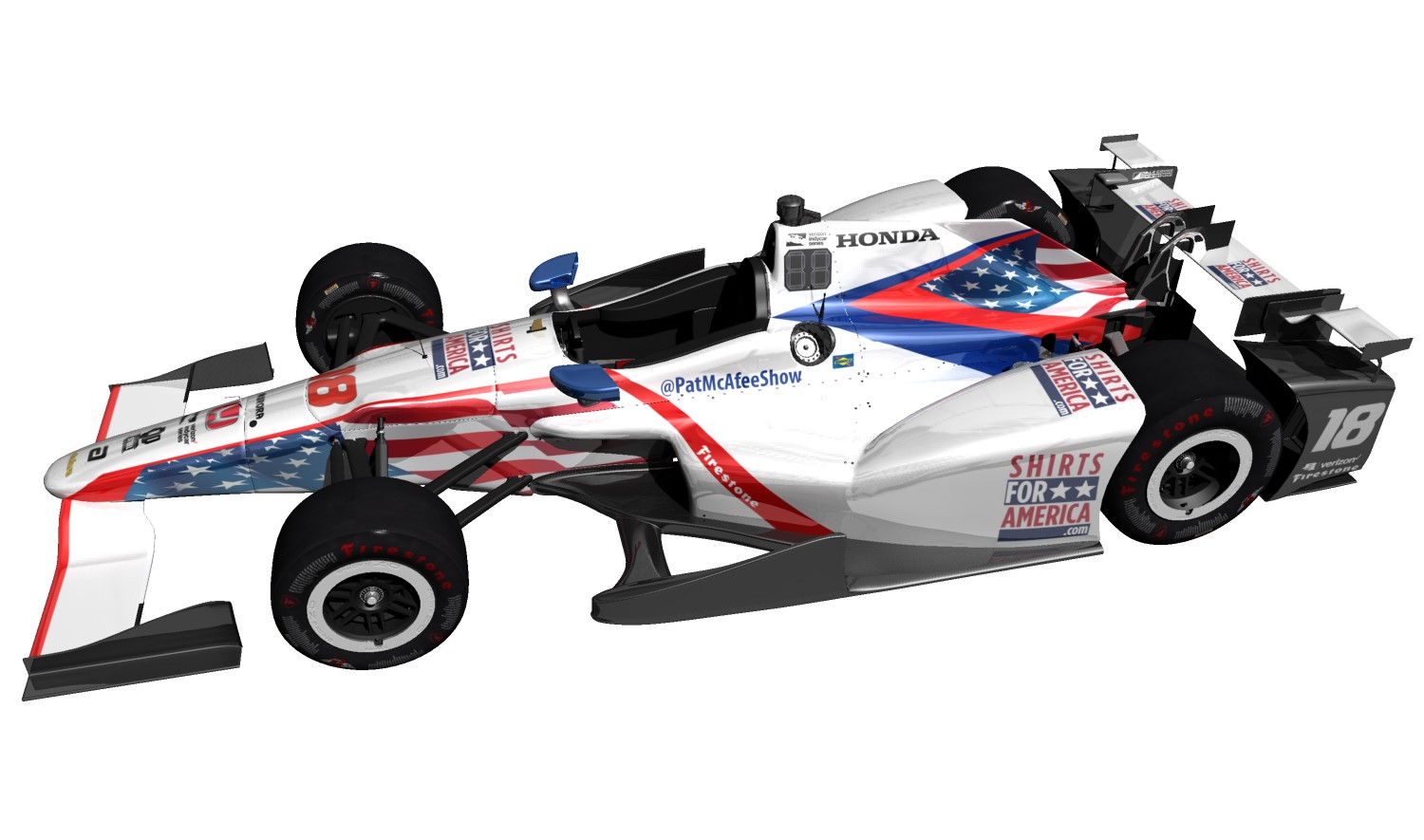 Indianapolis, IN – Conor Daly and Dale Coyne Racing are teaming up with Indianapolis Colts star player Pat McAfee for this year’s 100th Running of the Indianapolis 500, with McAfee’s company ShirtsForAmerica.com joining as primary sponsor on the American-themed #18 car driven by Daly.

McAfee’s recently launched ShirtsForAmerica.com company was born from two ideas. One, to help an Indiana driver at this year’s Indy 500 and the other, to help two military foundations.

For each t-shirt sold, a portion of the proceeds will go to Wish For Our Heroes, which was founded by American veterans to help struggling veterans with every day situations they face off the battlefield and to The Pat McAfee Foundation. Now in its fourth year, the Pat McAfee Foundation has given more than $150 000 in scholarships to children of military families.

“Conor and I have been friends for a while now and I couldn't wait to hear his thoughts about the 100th running of The Greatest Spectacle in Racing and how magical the Indy 500 is," shared McAfee who is also a stand-up comedian. “Conor, being a kid from Indiana, started talking about how fantastic it is for Indiana that all of these awesome things are going to happen, how the entire world's eyes turn to Indiana, and how every year we knock it out of the park.

“While we chatted about how lucky we were to be Hoosiers, he told me that he didn't have a primary sponsor yet for the race. I didn't believe him at first but then I saw it as an opportunity not only to help an Indianapolis kid run in the 100th Running of the Indianapolis 500, but also, as a chance to raise some money for a couple of military foundations. So I created ShirtsForAmerica.com and sponsored his car. When we're chugging milk in Victory Lane Memorial Day weekend, we'll do it with some true fulfillment knowing that we're also helping American heroes," concluded the Colts player.

The #18 car has shed its white, green and black livery for the red, white and blue. The American flag will be featured on the nose as well as on the shark fin, with the ShirtsForAmerica.com logo placed prominently on the side pods.

“Pat is a tremendous American and to have this opportunity to work together is fantastic," expressed Daly. “I’m proud to represent ShirtsForAmerica.com on track as we raise money to help American Veterans. As a passionate American Hoosier myself, I can’t wait to pilot our red white and blue #18 machine in the 100th Running of the Indianapolis 500. We are going to give it everything we’ve got this month and I can’t thank Pat enough for wanting to come onboard to make this happen."

“We’re very excited to partner with Pat McAfee and ShirtsForAmerica.com in the 100th Running of the Indianapolis 500," added Team Owner Dale Coyne. “The story behind the start of Pat’s company is what being American is all about with helping and giving back to others. Promoting his ShirtsForAmerica.com brand at the biggest single-day sporting event in the world that also happens to take place on Memorial Day weekend is only fitting. We’re proud to see our #18 car sporting the American colors at this historic race."

The all-American #18 ShirtsForAmerica.com machine will make its first public appearance on Thursday, May 19 during the Noon to 6pm practice session.

Qualifying for the Indianapolis 500 takes place this weekend, May 21st and 22nd with the Greatest Spectacle in Racing going green on May 29th. The race will be broadcast live on ABC starting at 11am ET.