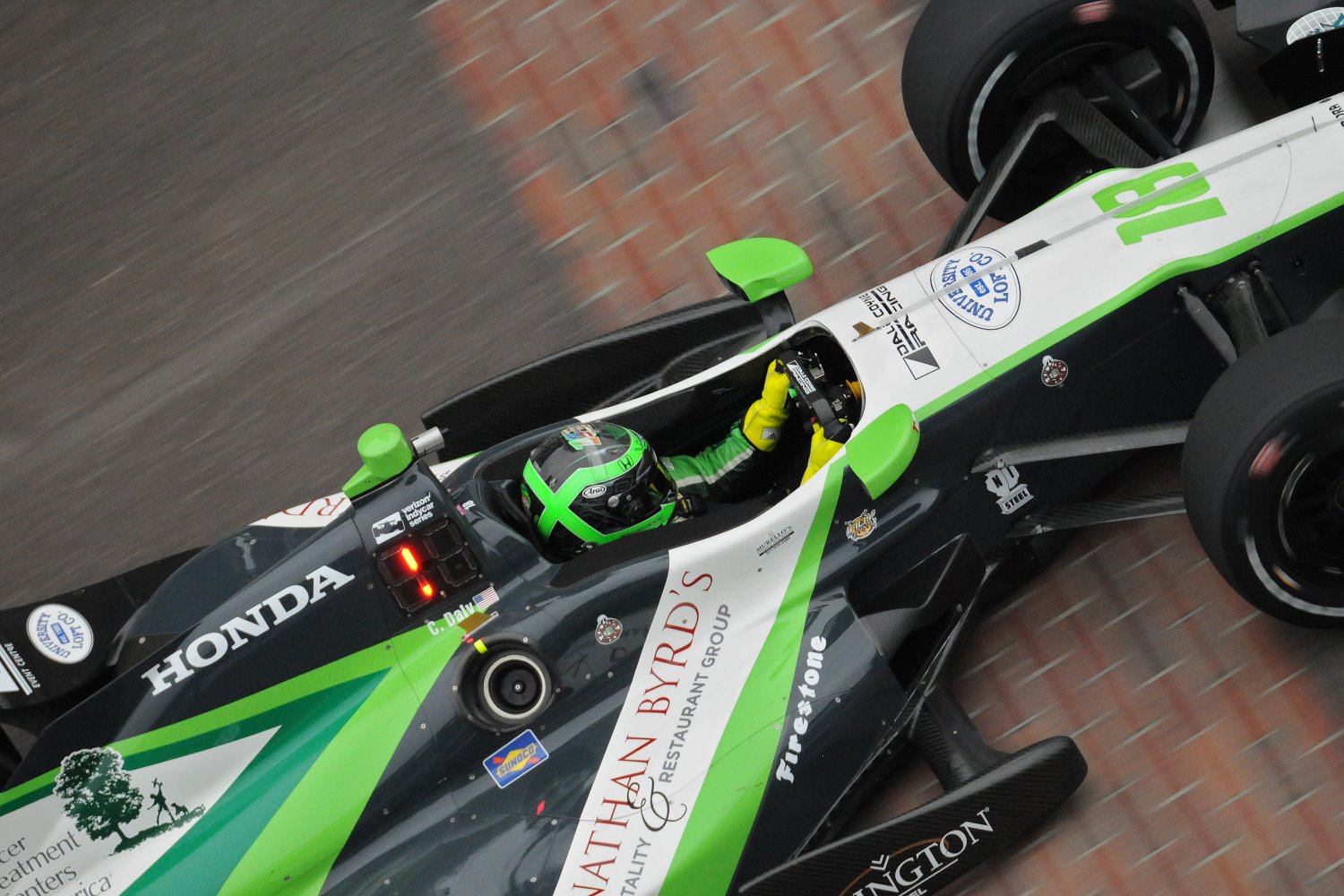 Indianapolis, IN – Dale Coyne Racing is writing history of its own this year, with the team entering four cars into the 100th Running of the Indianapolis. It’s the first time in the team’s history that it will be taking on such an undertaking, in any event.

The team is counting on full-time driver Conor Daly (#18), newcomer to the team Gabby Chaves (#19) and Indianapolis 500 only drivers Pippa Mann (#63) and Bryan Clauson (#88) to qualify their cars for the historic running of the 500-mile race.

All drivers will be on track for practice starting Monday, May 16 from 2pm to 6pm ET, with Clauson doing the refresher session earlier in the day from noon to 2pm ET.

The following are notes and quotes from our drivers, ahead of this week’s practice and qualifying.

– Daly is a full time rookie in the Verizon IndyCar Series this season, however, he won’t be sporting rookie stripes for this event, as he first raced in the Indianapolis 500 in 2013 with AJ Foyt Racing.

– The American will be attempting to qualify for his third Indy 500 on Saturday.

– In his first year competing in the historic event, Daly qualified 31st and went on to finish 22nd.

– Last season, he qualified 31st but never took the green flag after his car caught fire on the pace laps.

“We’re obviously all pumped for the Indy 500. It will be fun first of all to just to get things going. Everyone is really excited to see competition wise where we all stack up. I think no one really knows. The excitement of the unknown is really cool. I know our mission is to work every day and get the cars as fast as possible for qualifying weekend and then make sure we’re ready for the race. The goal is to do as much work as we can and stay focused on that main goal.

“It means everything to me to be here at the Indianapolis Motor Speedway. It’s my hometown, this is where I grew up. It’s the castle that I want to rule. I want to be here all the time. It’s always a great place to be and when you’re getting to drive a race car here, it’s rare, but it’s always awesome."

– The Columbian qualified 26th as the fastest rookie for his first Indy 500 last year and went on to finish 16th.

– Chaves led his first IndyCar Series laps last season on a superspeedway at Pocono, leading the field for 21 laps.

“I’m super excited to get rolling with the practice sessions for the Indy 500. Especially this year with the 100th Running, a new team and new aero configurations, it’s really an exciting challenge. I’m really looking forward to working through those challenges and to see where we can come out and hopefully have a very strong car and showing in the race.

“(What does it mean to you to be at IMS) More so than being on track at the Speedway, I think it’s really about the last 100 plus years of history and the 100 runnings of the race. All the legends, all the drivers, teams, cars, all the innovation, everything that this place has been a route for, now I get to be part of that as well, along with 32 other drivers, so I’m really looking forward to it and to have my place in history."

– Mann is entered into the Indianapolis 500 for the fourth consecutive year with Dale Coyne Racing.

– She will be attempting to qualify for her fifth Indy 500 this year, her first start was in 2011.

– Mann last competed aboard an Indy car in August of 2015 at the 2.5-mile Pocono Raceway, where she tied her IndyCar Series best finish of 13th.

– The British driver also registered her best Series start of 12th on the Pocono Raceway superspeedway.

What she has to say:

“It always feels like it’s such a long time out of the car for me. I’m so happy that I actually get to finally get back in a car on Monday for the first time since August of last year. I’m really looking forward to picking up where we left off last August, and to be teaming up with Rob Ridgely again as the engineer, with who I’ve had my best IndyCar finishes.

“It’s the Indianapolis Motor Speedway, even walking around the garage area I get goose bumps being here, it’s really great to be here and to get back on track. Hopefully seeing that pink car on track will also help boost the campaign to raise money for Komen. I’m aware I’m married so I’m not meant to say this, because it comes off as a bit too strong but it means everything to me to be here. My husband is aware of that and he knows how wound up and worked up I get when I try and pull things together to ensure that I’m going to be in a race car, so he has to live through that too. It’s kind of everything to me to be in a car here, it really is."

To donate to the #GetInvolved campaign visit https://igg.me/at/getinvolved2016

– Clauson, a regular in the dirt track open-wheel world and four time USAC Champion, is making his third appearance at the Indianapolis 500 this year.

– The Noblesville, IN resident registered his best finish at the Indianapolis 500 in 2012 with a finish of 30th.

– Clauson is more than a quarter of the way through his Chasing 200 Tour: Circular Insanity, in which he is attempting to take part in 200 races this year, including the 100th Running of the Indianapolis 500.

“It’s a special place for everybody, but for me, being my only IndyCar race every year, it’s very exciting to be back, it’s such a special place. I always refer to this place as the Disneyland for race car drivers because some days you have really fun days, some days you have tough days and some days it’s really crowded and hard to get around, but at the end of the day we all love being here, it’s a lot of fun and this year is an even bigger year with the 10th Running. There will be a lot going on and a lot of extra excitement surrounding the race. I’m just happy to be back with Jonathan Byrd’s and to be joining Dale Coyne Racing and looking forward to getting to work on Monday.

“Switching to driving the Indy car versus what I normally drive is a big difference. Nothing really translates but you just kind of have to go back and remember where you left off last year and certainly the learning curve becomes a little bit longer because you’re spreading it out over years not races. This will only be my third IndyCar race since 2012. Certainly that learning process takes a little bit longer. You sit differently, you steer differently, everything is so different but once you climb in and get out there everything comes back and shortly after you’re back in the zone."