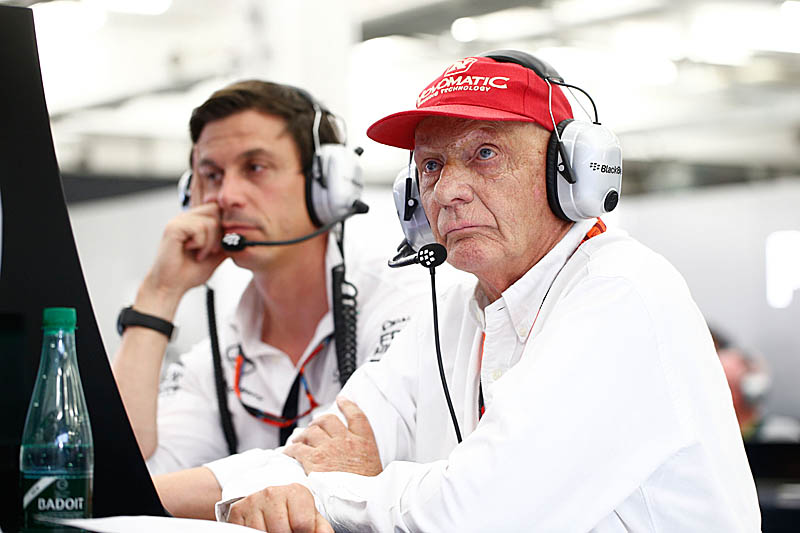 Formula One championship leader Nico Rosberg's "hopes of an eighth win in a row disappeared on Sunday after a collision with Mercedes teammate Lewis Hamilton on the opening lap of the Spanish Grand Prix," according to Alan Baldwin of REUTERS.

The German passed Hamilton "around the outside of turn one and the Briton was then squeezed on to the grass as he tried to regain the lead at turn three."
His car "skewed sideways and smashed into Rosberg's, with both drivers ending up in the gravel and the safety car deployed."
Watching Daimler CEO Dieter Zetsche "shook his head in dismay, while Hamilton threw his steering wheel out of the car." Mercedes non-Exec Chair Niki Lauda, a triple world champion himself, "blamed Hamilton before going to see the drivers."
Lauda said, "It is stupid, we could've won this race. Lewis is too aggressive. I need to talk to them and hear their explanation and then we will see what happens."
Mercedes Motorsport Head Toto Wolff, who has "had to bang heads together before now, was more cautious." He said, "I'd say let's wait and see what the stewards say. It's not a situation where you can attribute 100 percent of the blame" Reuters.
EUROSPORT reported following a debrief that involved both drivers, Wolff, Lauda and Mercedes F1 Exec Dir Paddy Lowe, Wolff said that "no one is to blame entirely." Wolff spoke to the media after leaving the debrief with both drivers still in the motor home and he described the atmosphere as "not good."
He said, "It's a very difficult situation and they're both pretty upset because they know about the effort and of course they have their perspectives. … The atmosphere is not good because we had a potential one-two, we lost many points for the championship."
When asked if this "felt like a repeat" of the Spa '14 clash between the pair, Wolff replied, "This is Spa all over again from the result but we have matured as a team. We knew at a certain stage this could happen and here we are" Eurosport
In London, Paul Weaver wrote Mercedes team bosses were "locked together in gloomy inquest just minutes after the start of Sunday’s Spanish Grand Prix" after Hamilton and Rosberg crashed out, leaving the field clear for Red Bull’s Max Verstappen to win the race.
The stewards were meeting to "assess the situation and they and Mercedes were anxious to speak to both drivers." If Hamilton does "receive reprimand he will be hit with a 10-place penalty for the next race in Monaco — the worst race on the schedule for overtaking." These two "have history." In '14 Rosberg was "blamed for crashing into Hamilton and earlier that year he appeared to be guilty of compromising the world champion’s efforts to win pole at Monaco." Guardian