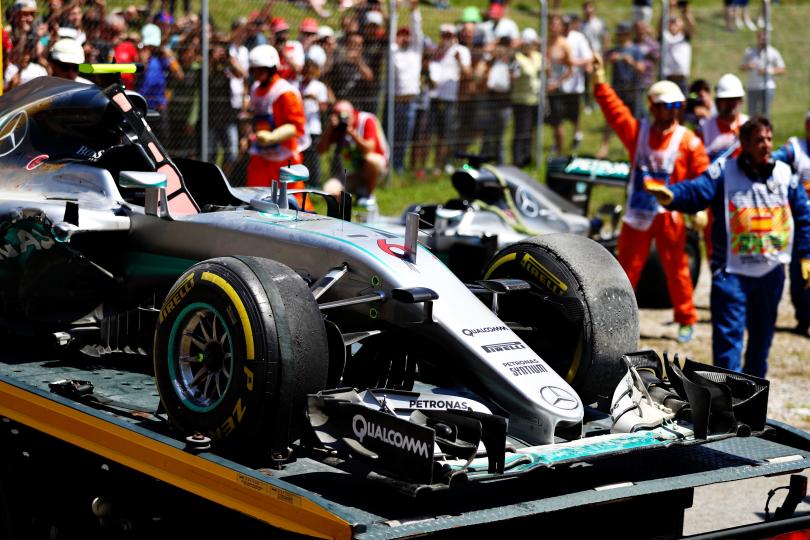 A 'gutted' Nico Rosberg said Sunday's Spanish Grand Prix had been his to win until a collision with Mercedes team mate Lewis Hamilton dumped him in the gravel and ended a run of seven successive victories.

Formula One stewards summoned both drivers after the first lap accident between the sport's dominant pairing and decided to take no further action.

Rosberg, the world championship leader, had seized the lead at the start from Hamilton, who was on pole position, but then lost speed into turn three when he entered an incorrect setting on the steering wheel.

That left a difference between the two of around 17 kph, with Hamilton trying to pass on the inside but squeezed onto the grass where he lost control and skidded back across the track and into Rosberg.

"I was sure that it was my race to win," said Rosberg, who would have become only the third driver to win the first five races of a season after Michael Schumacher and Nigel Mansell.

"I saw Lewis closing in and as soon as I could I closed the door with a clear strong move to make sure he understands that there's not going to be space there," said Rosberg. "I was very surprised that he went for it anyway."

"At the moment I'm just extremely gutted," he said. "I'm not just gutted for myself but for everybody because we are one team and all together in this.

"I was about to win that race. What solace can I take? I'm standing here now with zero points and I was in the gravel trap," he added.

Hamilton, the reigning world champion who has not won since he took his third title last October, said he felt a similar emptiness and had apologized to the team for not delivering the result they deserved.

"I don’t have any particular feelings at the moment. I’m just disappointed for the team. I’m sure every person in here has an opinion, but it doesn’t make any difference," said the 31-year-old.

"I didn’t score those points for the team. These things happen in racing but it’s the right thing to apologize to all these guys, just like when the engine fails they apologize to me," he said. Reuters