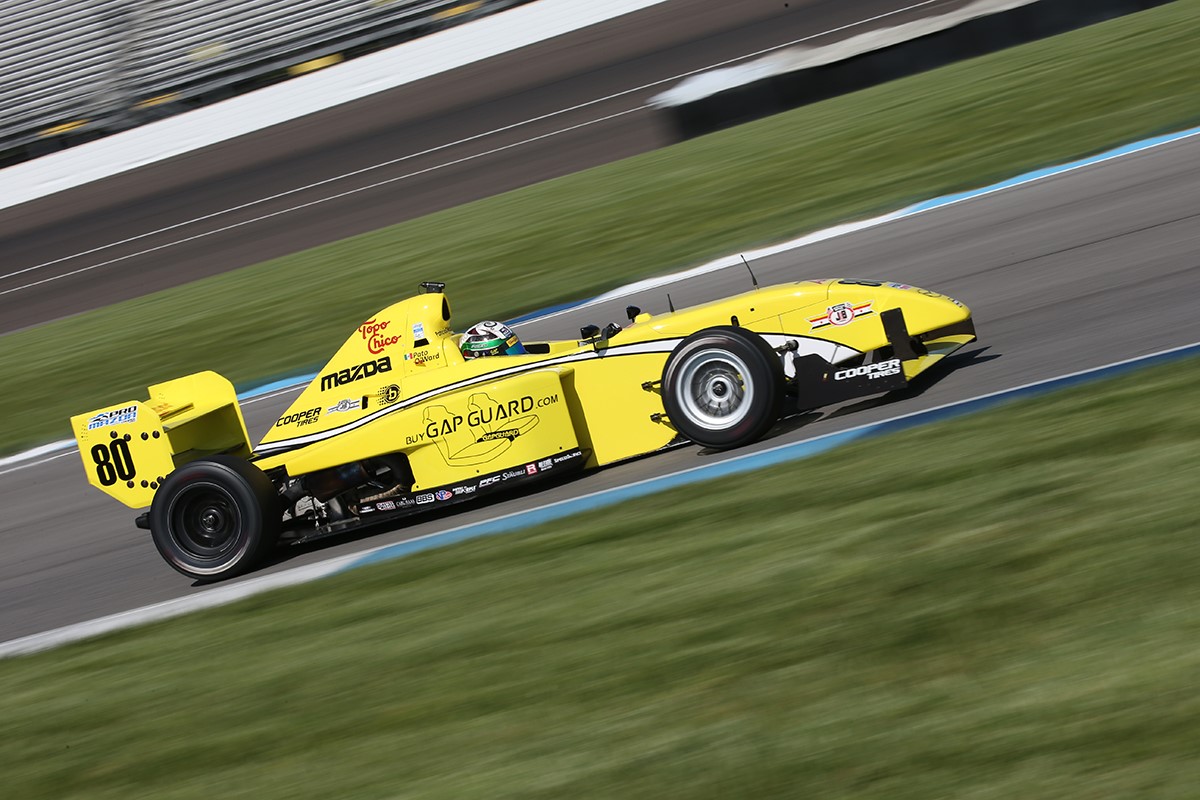 The weather turned distinctively cooler today at the Indianapolis Motor Speedway, but Patricio "Pato" O'Ward continued his hot streak by dominating this morning’s Pro Mazda Grand Prix of Indianapolis Presented by Cooper Tires. O’Ward, 17, from Monterrey, Mexico, repeated his form from yesterday to claim his fourth straight win and his fifth of the season in the Pro Mazda Championship Presented by Cooper Tires.

Aaron Telitz, from Birchwood, Wis., ensured another clean sweep of the top two positions by Team Pelfrey – also for the fifth time in six races – while Castle Rock, Colo.’s Will Owen finished a lonely third for locally based team Juncos Racing.

The only time anyone came close to challenging O’Ward’s superiority this weekend was on the long run from the rolling start to Turn One on the 2.439-mile road course. Telitz remained alongside all the way into the braking area, while Owen realized this might be his only chance to derail the Team Pelfrey freight train, so kept his foot on the throttle as long as he dared before jumping on the brakes for the tight right-hander. The three cars were virtually abreast as they turned into the corner but they emerged in the same order, and O’Ward never looked back.

O’Ward quickly stretched out his advantage to over four seconds before managing a comfortable gap. His eventual margin of victory was 4.7056 seconds. O’Ward set the fastest race lap for good measure. He now leads Telitz by 188 points to 149 with 10 races remaining this season.

Telitz took a little longer to get up to speed but, once into his groove, quickly left Owen, in the quickest of the four Juncos Racing entries, firmly in his wake. He completed the 29 lap all-green race a full 17 seconds clear of Owen, who in turn finished 13.7 seconds clear of anyone else.

Arguably the best drive of the race was posted by 2015 Cooper Tires USF2000 Championship Powered by Mazda winner Nico Jamin. The Mazda scholarship winner from Rouen, France, completed the first lap in seventh position, locked in battle with Cape Motorsports with Wayne Taylor Racing teammate Jake Eidson, but by the finish had worked his way through to fourth.

The PFC Award went to the winning team, Team Pelfrey.

Bobby Eberle (JDC MotorSports), from Houston, Texas, won the National Class in convincing style for the second day in a row, although teammate Kevin Davis, from Alvin, Ill., remained in contention for much of the race after improving his pace by almost 2.5 seconds in comparison to Friday.

The next round of the Pro Mazda Championship Presented by Cooper Tires will take place on the Lucas Oil Raceway oval in nearby Brownsburg, Ind., on the evening of Friday, May 27.

Patricio “Pato" O’Ward (#80 Gap Guard-Team Pelfrey/TopoChico): “I’m so happy right now! We had a nearly perfect weekend in the world capital of racing and one of the greatest racetracks in the world. It’s a team effort, everyone works together so well. It’s so cold this morning – I really felt it getting into the car, I couldn’t feel my hands or my feet! But once you get going and blood starts pumping, you’re fine. We went with the sticker Cooper tires and I was really happy with how quickly they came up to temperature. I just had to stay consistent out front and get the job done. I tried to stay relaxed and do my job. I can’t let the pressure get to me, because that’s when you make a mistake."