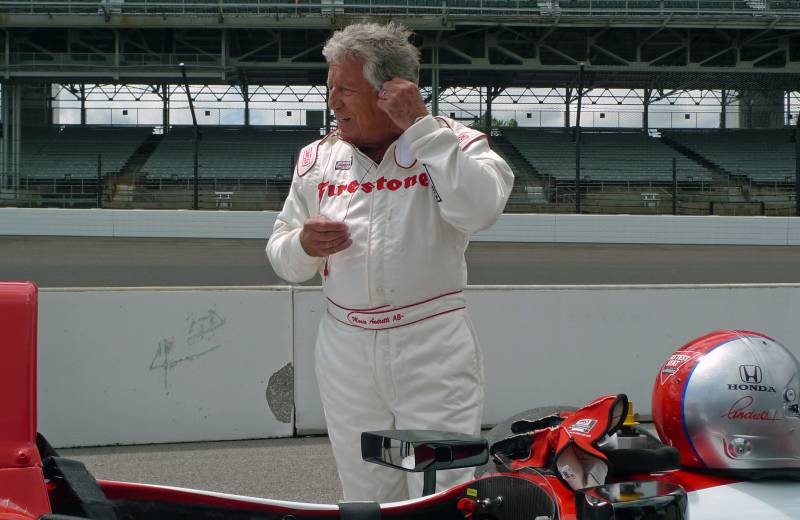 On any given day, if you got a ride in the car of a 76-year-old grandfather, you'd be expecting a slow, laborious, even frustrating drive, punctuated by car horns from other irritated drivers on the road trying to pass. But today isn't one of those days.

Because said grandfather standing in front of me is Mario Andretti, zipping up his racing suit like he's done a million times before. And the vehicle in front of him is a two-seat Indy car, pointed opportunistically towards an opening in the pit wall of the Indianapolis Motor Speedway. Off to pick up more Geritol, we are not.

Indy is a special place for Andretti, despite having won the Indianapolis 500 just once in 29 attempts. And this year is special for the legendary race itself, as it marks its 100th running on May 29. Andretti himself found out early in his career the true importance of this race.

"I was a rookie in 1965, and I finished third here [at the Indy 500] and got rookie of the year honors," he says before our drive. "But I had a good season, I won my first Champ Car race and then I won the championship; at 25, I was the youngest to do so. So, I was invited on the Johnny Carson show, and I was proud as a peacock, of course. And I was introduced as the Indianapolis rookie of the year; they never mentioned the national championship. And that peed me off, as you can imagine.

"But it brought to bear the reality of the importance of this event. Here I sweated the whole season, I bring in a national championship, and they mention my third-place finish at Indianapolis. The scope of this event, it's the only race on this planet, in my opinion, that's worth a championship."

The passenger cockpit of this Indy car is cramped, and were it not for a helmet visor I would be gnawing on my bent knees. The Honda engine fires up and we pick up speed out onto the track – very quickly. Andretti does not hold back, and at the end of the straight the brutal g force from the carbon brakes bites hard, throwing my helmeted head forward. Andretti takes the first right turn – we're doing the infield road course, not the oval. He's using the entire track, and I can't believe he doesn't take out a cone as he brushes up against the edge, powering out of turns like he's hunting down the leader of a race.

But he knows the limits of this car; he still travels to almost every IndyCar race, taking passengers around the courses in it. Today, he's spending more than two hours in the car – about the same duration as an actual race – giving rides around the infield track at an event sponsored by Firestone, one of many companies for which Andretti is an ambassador. About an hour into the session, one of the Firestone representatives – obviously assuming Andretti is your normal septuagenarian – asks the driver's long-time assistant if he should be given a rest, a request that was dismissed with a wave of a hand. "He'll go all day if you let him," she says casually.

Andretti won the 500 in 1969, but was never able to repeat up to when he retired from the sport in 1994. Neither of his sons Michael (who now owns an IndyCar team) or Jeff, nor cousin John, who all raced here, ever won, and his grandson Marco, currently an IndyCar driver, has yet to finish first, all adding up to what is known as the Andretti Curse. But Mario will have none of that talk.

"You can go back and forth, and figure this would have been so good, but how do you control what happens like that? You can put your chin in your socks and sob, but you move on. You move on. This thing about the Andretti Curse, none of that means anything to us.

"You have that disappointment of course hit you, but then you move on. You cannot stay negative; you stay negative, you're done. It's done, over, nothing I can do about it now; that's how I've always looked at it. I never, never dwelled on the negative." Neil Vorano/Driving.ca