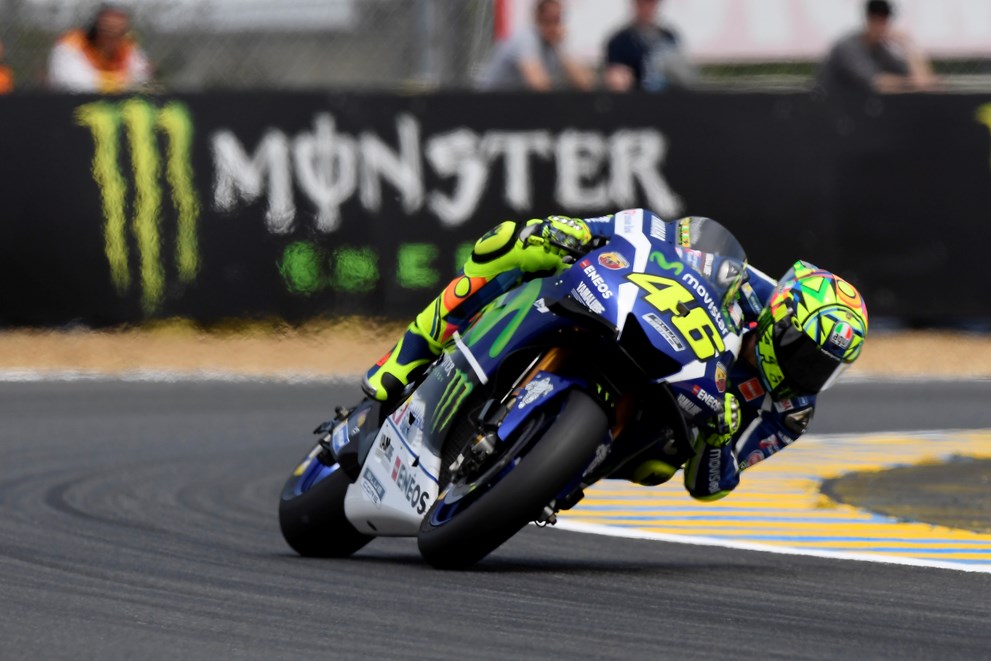 Valentino Rossi is just 12 points behind his teammate Jorge Lorenzo in the standings after his charge to second at the French GP.

Rossi was simply on fire at the French GP, fighting his way from seventh on the grid to secure his 178th premier class podium. 'The Doctor' had a poor start from the third row but quickly moved into sixth position before getting involved in a scrap with Monster Yamaha Tech 3 duo Pol Espargaro and Bradley Smith in the opening laps.

After muscling his way past his fellow Yamaha riders with strong but fair passes, he quickly went on to take fifth place from Aleix Espargaro (Team Suzuki Ecstar) after the third lap. The nine-time World Champion then set his sights on Marc Marquez (Repsol Honda Team) and increased his pace as he closed down the 1.3 second gap to the championship leader, posting a 1'33.293s, the fastest lap of the race.

With 20 laps to go Rossi moved up to fourth place as Iannone crashed out, which spurred Rossi on to fight for a place on the podium. Having saved his tires, he lined up his Spanish rival and under loud cheering from the fans he made his move in the Garage Vert corner on the next lap.

Now in his element he overtook his next target, Andrea Dovizioso (Ducati Team), up the inside in Made corner. Though he was unable to stretch his lead when in second place, he kept pushing his YZR-M1 to the limit until Marquez and Dovizioso got caught out in Turn 7 while trying to keep up with his pace. With twelve and a half laps left to go, Rossi was no longer under pressure. Unable to close in on his teammate, who had a gap of more than 5.2s, he focused on managing his advantage over Maverick Vinales (Team Suzuki Ecstar) in third place and landed a second consecutive podium finish, taking the checkered flag 10.654s behind his teammate. This meant that it was the second consecutive race that the factory Yamaha had achieved a 1-2 after Rossi's victory last time out in Jerez.

This now means that Rossi (78pts) is just 12 points behind his teammate Jorge Lorenzo (90pts) who leads the standings and just 7 points behind the second placed Marquez.

Rossi is in a strong position as he heads into round six of the 2016 MotoGP™ World Championship at Mugello, the Gran Premio d’Italia TIM, which takes place from the 20th to the 22nd of May.

Valentino Rossi: "I started quite badly from the third row so at the beginning it was very complicated. I had a quite good pace so I was able to push and I was quite fast, but you have to stay quiet because it was very easy to make some mistakes. Step by step I arrived to the back of Marquez and Dovi and at that moment I was a bit faster. I'm so happy, because when you start from seventh position and you take twenty points it's very good, also because they are twenty very important points. In the championship I'm twelve points behind Jorge and seven behind Marc. This means that between us three the championship is wide open and we have to concentrate. I'm just third at this moment, so I have to think race by race and especially think of Mugello and try to be competitive there."