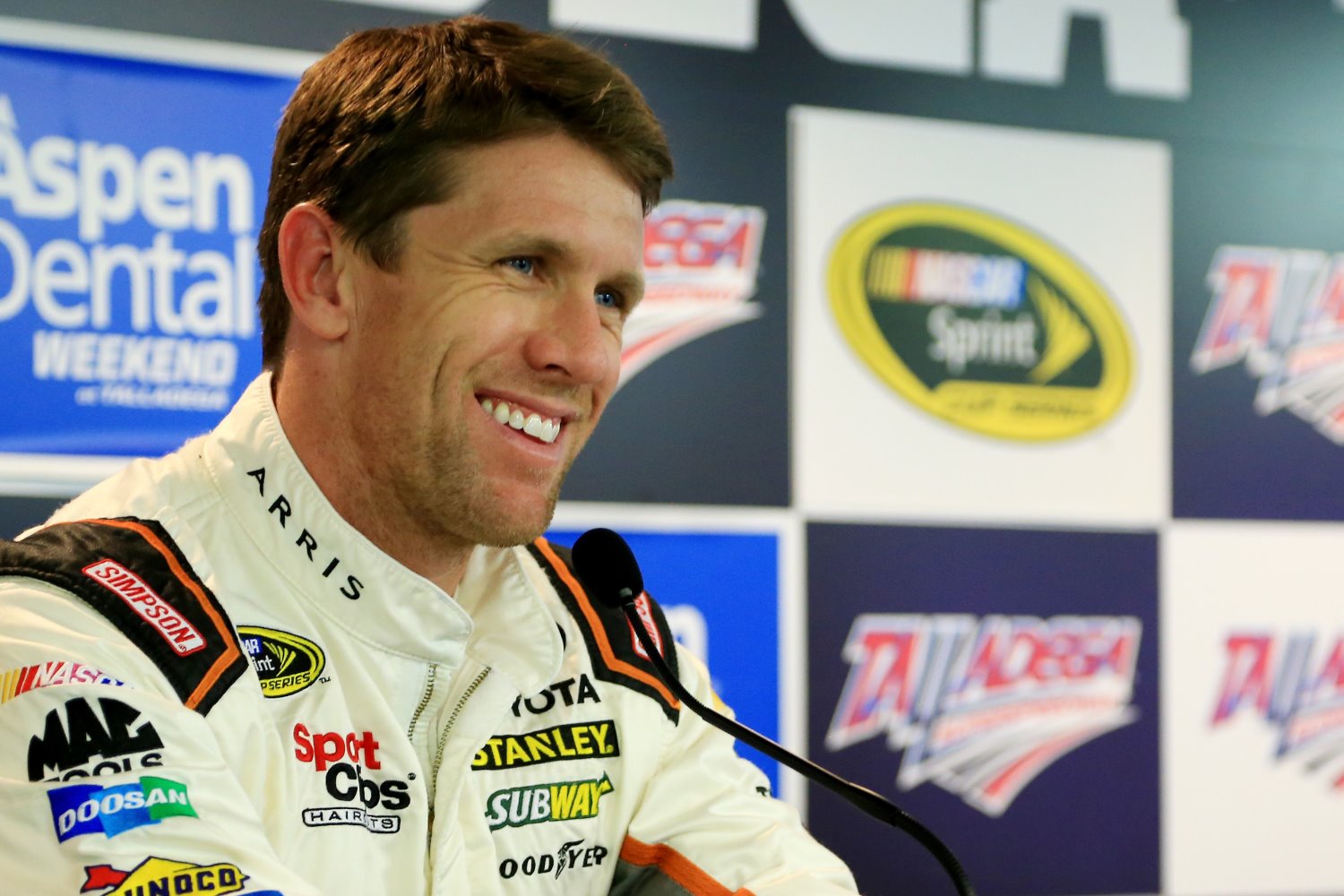 Joe Gibbs Racing driver Carl Edwards was made available to the media at Talladega Superspeedway:

What is your outlook this weekend at Talladega?

“Now we go practice and we’ve been doing great. The cars have been fast and we’re working well together as a team. Dave Rogers (crew chief) and I are having a blast and that’s cool to have those two wins. We’ve been just running well. We’ve had a couple races where we’ve struggled, but we’ve just kept digging and never quit and we just come here and just duplicate as a group what we were able to do at Daytona, I was really proud of that."

Do you plan to win all the races now and have you spoken with Kyle Busch since Richmond?

“We plan on winning every race, but if you look at last week there were four or five guys that could have won that race if things had gone a different way. What we’re going to do is just keep our heads down and keep working. The thing was that after we got the win at Bristol, there was so much pressure off and you wonder if the performance is going to change and it didn’t. We went there and we did a good job at Richmond. No, Kyle (Busch) and I haven’t had a chance to talk yet. I was testing in Indy for two days and I missed the meetings. This weekend will require us to talk together as a group and work well together and I’m sure we’ll have a chance to talk."

In light of Tony Stewart’s recent fine, do you know where the line is for driver’s to speak their minds?

“I listened to Brian France speak on Sirius this week and the way I understand it and I haven’t had a direct conversation with him, but the way I understand it is that he wants us to be outspoken, he wants us to share our opinions on things up to the point where it somehow diminishes the sports worth as a whole. I guess that’s where we have to be careful. I’m not exactly sure the line, but I’ll tell you this, everybody in the garage whether they’re in a fire suit or a suit and tie or whatever, sponsors, NASCAR, the drivers, all of us want the sport to be the best it can be. I guess we’ll just go do the best we can to promote the sport the best we can, but also I hope we’re able to just speak our minds. I haven’t had a fine yet so I’m not exactly sure where the line is. I’ve been talked to a couple times, but nothing too bad."

Is this the same car you ran in Daytona?

“Mine was hurt a little bit, but it ran well. I looked at Randy (Fuller, PR) and I need to talk to you more about this. I don’t need to see my stats at these places because they’re not good. I think it’s an average finish of about 20th and here I am talking to Brett (Holmes) about what he should do. I’d like to get a superspeedway win. We’ve got great cars and we’ve got great teammates. I feel like I know how to run these races, but I just haven’t been able to get the victory out of it. Hopefully we can do that."

What do you remember about falling doing the backflip at the Talladega dirt track?

“I don’t remember falling real bad, but it was bad enough that (Ken) Schrader said something like, ‘you can do all the backflips you want when you win, but when I win I’m going to sit on this tire with a piece of pizza and a beer.’ At that moment that sounded a lot smarter than the backflip, but that was fun meeting them over there. That track is a blast. We got to go over there and run with a bunch of NASCAR guys and got to run with Red Farmer and then Stacey and I put a deal together and went and ran Tony’s race and it was really cool and a cool group of people."

What advice would you give Brett Holmes for the ARCA race?

“Like I said, I’m not the best guy to talk to – I have wrecked about every way you can here. Just what I told him a minute ago, just to make it to the end and not tear up his car. This place is deceptively tough and deceptively dangerous because there’s so much room to race and you get so comfortable and you get lulled into this sense of security and then when something happens you realize, ‘wow, this is really hard to get stopped and control the people around you and avoid them.’ Just to be there at the end is the key."

What separates the drivers that win superspeedways from everyone else?

“I don’t know. I think you really have to understand, first of all you have to be there at the end. You can’t make stupid mistakes. I learned that early on. I wrecked one time here and I got out, went down and sat in the garage talking to Jack (Roush) and I said something like, ‘Man, there’s just nothing I could do to miss the wreck.’ And he said, ‘You might want to go look at the tape because you drove right past Tony Stewart into the wreck and he somehow missed it.’ I went back and watched and I learned from that. You really have to be watching ahead and you have to pay attention. I think the thing that separates the guys that win from my perspective and what I’ve seen is those guys that are really aggressive and they stay out there, they block and they work the traffic and now with two wins, Dave (Rogers, crew chief) and I talked about it and we’re just going to go be aggressive the whole day and have that confidence to go up there and not worry about the outcome. I think you have to do that to get the win, that’s what it looks like."

Are you worried about getting hurt doing the backflip?

“To be honest, my foot hurt awfully bad last week and after we got done with all the pictures, I was like, ‘Randy, I think I hurt my foot.’ I over-rated at Bristol and I under-rotated a little at Richmond. I just don’t do a lot of backflips. I don’t know."

Will you reach a point where you’re too old to do the backflip?

“I imagine, yeah. Everybody has their day and this is the oldest I’ve been is right now. It’s easy to do the flip, it’s just hard to land right. That’s the hard part, but yes I’m aware that now I’m obligated to do it and I’ll get booed out of the place if I don’t. There’s people up there watching and not everyone is excited. Some of them watch and they’re like, ‘This is the one, this is the time,’ and they’ve got their camera. We’ll see."

How do you feel about the new lug nut rule?

“I don’t know exactly what the rule is. I know that they’re going to check lug nuts before and after the race, correct? Is that right? So I don’t know. My pit crew guys – we had one loose wheel that I can remember in the last year and a half and it was at Texas and Clay (Robinson), my front tire changer, he knew it was loose. He knew when we left. He said, ‘Man, that one’s iffy,’ so as soon as I said, ‘Hey, I might have a problem,’ he said, ‘You’ve got to come down pit road.’ I really trust my guys. If they say, ‘Hey, that wheel’s good. It’s going to stay on,’ it’s good, but as far as safety goes, I think everybody knows NASCAR does the best they can for safety and regardless of how we got to the rule – I know that was a little messy – it seems like it’s a good thing."

How much of a relief is it when you get a win with a dominant car?

“That’s a great question and Dave (Rogers, crew chief) actually talked about that – with these cars and with the pit crew that we have and the engines from TRD (Toyota Racing Development), when you win with these cars it feels like about what you should do. It’s a different feeling. When you have cars this good and you have veteran people working on them and, as some people point out, I’m an aged veteran now, we should be winning these races and it is a little bit different feeling. It feels like we’re out doing our jobs, so it’s more satisfying than euphoric. It’s a really neat feeling and hopefully we can just keep it up."