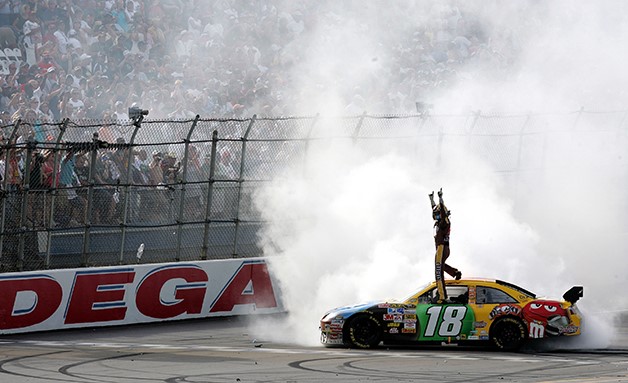 Kyle Busch, like many seasoned NASCAR Sprint Cup Series drivers, has about seen it all at Talladega Superspeedway. Busch, who will be a favorite in Sunday’s GEICO 500, has always been a strong performer at NASCAR’s Most Competitive venue, but not without a few mishaps along the way.

He’s found himself caught up in “The Big One" at Talladega on a few occasions. In 2007, Busch made highlight reels around the racing world, sliding on his roof down the backstretch during a NASCAR XFINITY Series race. Seconds before, he was running second. That’s just how quickly things can change at Talladega.

“I’ve had plenty of torn up race cars but it’s exciting here," says Busch, the reigning NASCAR Sprint Cup Series Champion. Talladega has also proven to be a strong point on the schedule for the Las Vegas, Nevada native. In fact, he is the only active driver to have won races here in each of NASCAR’s premier series – NASCAR Sprint Cup (2008), NASCAR XFINITY (2011) and NASCAR Camping World Truck Series (2009, 2010). The only other driver in the sport’s history to also accomplish that feat is Mark Martin, who can also claim an ARCA Racing Series (today known as the General Tire 200) win in 1981.

Busch used an 11th place finish in October at NASCAR’s Most Competitive track to advance in the 2015 Chase for the Sprint Cup, which he eventually claimed as champion. He notes his XFINITY triumph (Sparks Energy 300) in 2011 as his most memorable at the 2.66-mile oval.

"Our car was pretty torn up," Busch said, referring to a 21-car accident early in the race. “Jason Ratcliff was the crew chief at the time, and he and the team did an awesome job of repairing the car and we ended up coming back to win that race. If you looked at that thing in Gatorade Victory Lane, you would have never thought it was good enough shape to win the race. That was a fun day."

Busch, who won back-to-back races at Martinsville and Texas earlier this spring to secure his spot in this year’s Chase for the NASCAR Sprint Cup, hopes to add more of those positive snapshots to his memory bank during the TSS tripleheader race weekend.

"Talladega is more mentally draining than physically," said Busch, who is coming off a runner-up finish Sunday at Richmond after being tapped out of the way by teammate Carl Edwards in the final turn. "(But) Talladega is fun. It’s certainly got its own aspects of challenges. I’m sure many drivers have led into the reasons of those, just with all the unknowns surrounding this place, but it’s exciting. It’s certainly its own form of racing, and it’s almost its own form of motorsports."

One thing is for sure. – Busch wants to add some more Talladega hardware to his trophy case.

The action at Talladega kicks off on Friday (April 29) with practice sessions for the Sparks Energy 300 for the NASCAR XFINITY Series and GEICO 500, as well as practice, qualifying and the drop of the green flag for the General Tire 200 ARCA Racing Series Presented by Menards at 5 p.m. CDT. Saturday’s (April 30) schedule includes qualifying for the GEICO 500 as well as time trials and the start of the Sparks Energy 300 at 2 p.m. CDT. Later that evening, Big & Rich featuring Cowboy Troy, will headline the traditional Infield Concert. Country Music’s best-kept secret, Eric Lee Beddingfield, is set to open the event at 7:30 p.m. Admission is free with a GEICO 500 ticket. The GEICO 500 race is set for Sunday, May 1, at 12:00 p.m. (CDT).