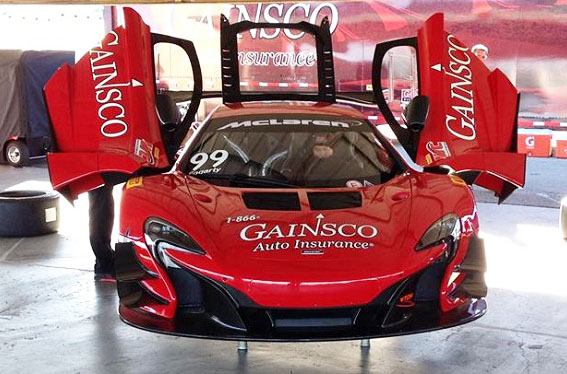 GAINSCO/Bob Stallings Racing’s McLaren 650S GT3 is set for this weekend’s Pirelli World Challenge round at Barber Motorsports Park after an extensive rebuild following its weekend-ending accident at Long Beach.

The "Red Dragon" sustained major damage to the front-end, driver’s side of the car as well as gearbox and suspension damage in the rear from Jon Fogarty’s heavy impact with the wall in opening practice last Friday.

The team immediately returned to their workshop in Texas to begin repairs, which saw nearly 60 new parts arrive from McLaren GT in England on Wednesday afternoon, prior to completing the rebuild less than 24 hours later.

"Terry Wilbert, along with Russ Marr, Martin Fox, and the newest member of our team, Paul Hutton, put GAINSCO’s No. 99 car back together, following the damage sustained in practice at Long Beach.

"As they put the finishing touches on the fully repaired car, I was struck by the professionalism and commitment of this team of ours.

"If it wasn’t for their determination, the Red Dragon would have missed the Barber event. I am so proud of every one of them."

Fogarty took to the track for Friday’s first of two practice sessions with the fully rebuilt McLaren, completing a total of eight laps.

"After a very disappointing weekend at Long Beach I am very excited to get back to racing at Barber," Fogarty said.

"Of course getting "back" to it would not be possible without the continuing hard work of the GAINSCO crew who have been working nonstop since the crash last Friday.

"They have put in a tremendous effort to get the car ready for this weekend, and I will do everything within my ability to turn that effort into race results."