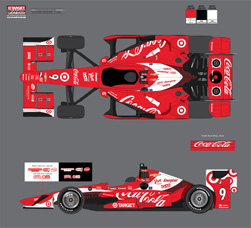 Scott Dixon has finished on the podium in all six previous Verizon IndyCar Series races at Barber Motorsports Park in Birmingham, but never on the top step reserved for the race winner.

The Chip Ganassi Racing driver is hoping his car's livery for this weekend's Honda Indy Grand Prix of Alabama will bring a Coke and a smile. Dixon will drive the No. 9 Coca-Cola Chevrolet in the April 22-24 race weekend, the fourth of 16 events on the 2016 schedule.

Coca-Cola unveiled today the music-themed paint scheme it will run on the car as part of a wider campaign. The soft-drink company is bringing back its "Share a Coke" marketing campaign, which the last two years focused on putting names on packaging and this year will transition to running lyrics from around 70 approved songs.

Dixon's car will feature the classic red Coca-Cola logo alongside a volume dial to the left of one of the mirrors, a mock turntable on the rear wing, earbuds by the cockpit and black and red "flowing bands" running horizontally along the length of the car.

Dixon finished second in each of the first four Barber races (2010-13) and third in the past two. While winless, he enjoys the scenic 2.3-mile, 17-turn permanent road course.

"Barber is demanding," Dixon said. "It's like a little bullring almost. It's very fast and very high-grip. There are both fast and blind corners and it can get narrow in some places as well.

"We also run well here and I'm looking forward to doing that again this weekend in the Coca-Cola car."

Opening practice at Barber on April 22 will be telecast live on NBCSN (noon ET), as well as Verizon P1 Award qualifying on April 23 (4 p.m. ET) and the 90-lap Honda Indy Grand Prix of Alabama on April 24 (3 p.m. ET). All practice sessions except the first will stream live at RaceControl.IndyCar.com.