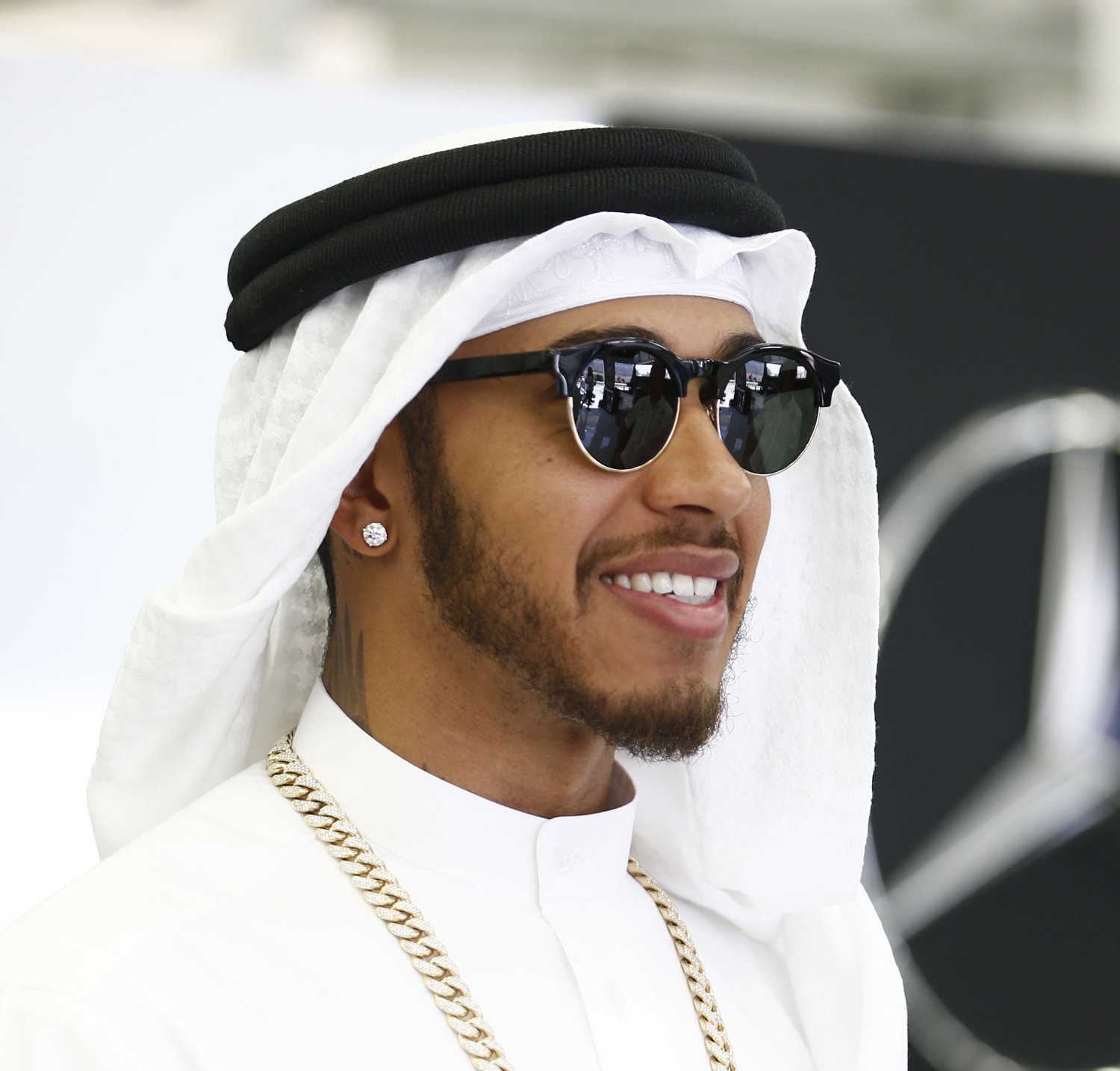 Hamilton 'not focused' on title – Tambay
(GMM) A lack of focus could have put Lewis Hamilton's bid for a third consecutive world championship off the rails in 2016.

That is the view of former F1 driver Patrick Tambay, speaking after a disastrous Chinese grand prix weekend for Briton Hamilton, filled with reliability problems and first-corner damage as he started from dead last.

The Mercedes driver is now 36 points behind his teammate Nico Rosberg, who in Shanghai won his sixth consecutive race.

"Is it 50 points now?" Hamilton asked reporters after the race. "36. Oh, that's not as bad as I thought. I feel pretty good right now," he said.

Fans and insiders cannot help to have noticed that Hamilton is no longer outwardly affected by poor results and setbacks, unlike in previous years.

"There's a long, long way to go," he said. "Lots can happen. It's just I don't have any more jokers available really."

Experts are wondering if Hamilton's apparently unflappable mood is in any way connected to his early troubles in 2016.

"He is not focused on the primary objective," Patrick Tambay, a driver from the 70s and 80s, agreed to France's RMC.

"He has already been world champion and perhaps he is not putting in the same effort, with the same determination, the same quality of work and application that Nico Rosberg does now," he added.

Indeed, Spain's El Mundo newspaper declared on Sunday that the ever-winning Rosberg is "the new Hamilton".

"What can stop him?" wondered Tambay. "I don't feel he has a lot of competition now."

But German Rosberg says he doesn't see it like that, insisting the season is only "a handful of races" into its unprecedented 21-date 2016 calendar.

"Yes, it is going well, but this is the longest season in F1 history with Lewis Hamilton as my teammate, a double (back to back) world champion, who has been hard to beat in the past three years," he said.

Alonso still 'has the passion' for F1 – Perez
(GMM) Fernando Alonso and Johnny Herbert have buried their differences with a hug live on television.

The pair clashed in Bahrain after Herbert, a former grand prix winner, urged the injured Spaniard to retire, but Alonso hit back by gatecrashing live British television to tell the Briton he is "not world champion".

But as Herbert conducted the drivers' parade interviews ahead of the Chinese grand prix, Felipe Massa urged the pair to hug it out and Herbert replied: "Of course, of course."

It was another awkward moment for Herbert, as Alonso's contemporary Sergio Perez dismissed the lingering notion that the McLaren-Honda driver's motivation is waning.

When asked about Herbert's view, Perez told the Spanish daily Marca: "It's difficult for me to comment, but I believe that every driver in F1 does it because he has the passion and the dream of being the best and winning each race.

"There is no other reason to be here," the Mexican added.

But the jury is out as to whether McLaren-Honda can fulfil Alonso's winning dream before age forces him to retire.

Team boss Eric Boullier acknowledged that McLaren and Honda are slightly out of alignment in terms of the urgency of their desire to win.

"McLaren wants to win tomorrow," he told Spain's El Pais in China. "Honda wants to win, but not necessarily tomorrow."

Ferrari not backing Vettel's Kvyat rebuke
(GMM) Sebastian Vettel's bosses did not rally around the German after he pointed an angry finger at rival Daniil Kvyat in China.

Vettel was furious that Red Bull youngster Kvyat's first-corner charge had resulted in him needing to jink the Ferrari left and crash into the sister red car of Kimi Raikkonen.

Vettel apologized to the team on the radio and to Raikkonen in person, but publicly fumed at Russian Kvyat just before walking onto the podium.

Ferrari team boss Maurizio Arrivabene, however, did not like the pointing of fingers.

"We should not point the finger at others," he is quoted by Bild newspaper. "This is racing, not Monopoly. But if your two drivers crash into one another, that's never good.

"Kvyat came into the corner at high speed," Arrivabene is also quoted by the Italian media, "but Seb and Kimi would have done the same in his position."

Vettel's reaction to the incident might be explained by the rare presence in the garage of the imposing and demanding Ferrari president, Sergio Marchionne.

Arrivabene admitted: "He (Marchionne) knows what racing is, and was not pleased, as I am not. I think yes, in normal circumstances we would have had a very, very good chance of winning."

Indeed, president Marchionne confirmed: "Two Ferrari drivers colliding is not very Ferrari (like), but I'm more embarrassed for them than for me, if I'm honest.

"That he (Vettel) apologized, I would have done so too, getting in this situation with someone much more experienced than him, but the good thing was that the comeback was a masterpiece, so I'm happy about that."

However, Marchionne had demanded before the season began that Ferrari must return to winning races immediately in 2016, and so far that objective has been missed.

"I see a Ferrari that is growing, and I like that," the Italian-Canadian said in China. "It is like a child that is growing up but is now and then a little petulant.

"But the car is there and we have to go on like this."

Renault could stop 2016 car development soon
(GMM) Renault is close to deciding to abandon development of its 2016 car, according to the Danish newspaper BT.

It follows a mainly uncompetitive start to the season for the Enstone team, following the eleventh hour takeover of Lotus.

"At the moment there will be small, aerodynamic improvements," said Renault official Cyril Abiteboul in Shanghai, "and especially for Spain we have a major update.

"But right now we are deciding about the car with respect to 2016 and 2017," added the Frenchman. "We are yet to decide how much we will improve in 2016, but the improvements that do come must in all cases help also for 2017."

Renault, yet to score a single point this year, always acknowledged that 2016 would be difficult, given the lateness of the decision to switch from Mercedes power and in view of the sweeping rule changes for 2017.

"To be honest," said Abiteboul, "within the team, there are different opinions about this, because it also makes sense to develop the current car.

"It could improve our performance, therefore giving us a better finishing position in the championship this year," he added, probably referring to the sport's income-distribution system.

"But there are big changes in the aerodynamic regulations in 2017 and so we need to determine when we decide to focus on the new car. It is a decision we have to take within the next two weeks, and it is a decision that could mean that more or less we stop developing the 2016 car," Abiteboul said.

The 'power unit', however, is an entirely different matter, with Abiteboul saying Renault is "fighting like mad" to develop it.

"No matter what we do with the car, we must have a more competitive engine," he said, amid reports a major upgrade is coming for Canada in June.

"I cannot put a precise figure on the extra horse power that comes from the new engine, but we think the gap that we currently have to Mercedes will be halved."

The young Dane joined the new works Renault project at Enstone this year having been dropped as McLaren's reserve driver.

"He is a natural leader," Renault official Cyril Abiteboul told the Danish newspaper BT in China.

"Kevin has just a one-year contract initially, but with the work he has done until now, I see no reason why we should not continue to cooperate."

Ericsson hits back at 'unprofessional' Grosjean
(GMM) Marcus Ericsson has hit back at "unprofessional" rival Romain Grosjean after the Chinese grand prix.

He slammed "ridiculous" Pirelli tire pressures and, on the occasion of his 30th birthday on Sunday, collided with Marcus Ericsson and reportedly confronted the Swede afterwards.

"Romain ran up to me and called me all sorts of words," Ericsson, who drives for Sauber, told the Swedish tabloid Aftonbladet.

"He said that I was an idiot, I'm blind — (Grosjean was) not behaving like a mature adult. He shouted at me, I told him to calm down but he didn't want to.

"Instead he went and said the same thing to journalists. I think it's immature, unprofessional and disrespectful," said Ericsson.

"He was probably upset about a bad race, but to hear this from the driver who was suspended (in 2012) for dangerous driving, I think it's a little strange," he said.