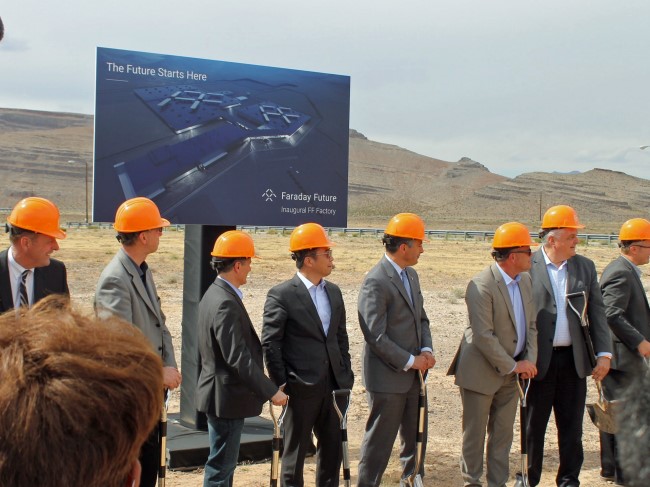 NORTH LAS VEGAS, Nevada — Some four months after electric-car company Faraday Future announced plans to build its first US manufacturing facility in Nevada, the ceremonial shovels have been driven into the ground.

About 4,500 jobs will be created in and around the planned 900-acre factory that will house the assembly line for Faraday Future's forthcoming electric autonomous vehicles.

Some of the core technologies for those rides are in the advanced stages of development, according to Nick Sampson, Faraday Future's SVP of research and development and engineering. He tells Business Insider that the process has been a smooth one so far.

"We're testing both mechanical and software systems, and before the end of this year, we'll have full prototypes that represent our production cars."

"Our first vehicle will be at the premium end of the segment," Faraday Future representative Stacy Morris told Business Insider last week.

"The cars will have industry-leading range, and the connectivity and the streaming technology will be the unique selling point of the Faraday brand," she added.

The site of the Faraday Future plant is about 500 miles south of Tesla's Gigafactory battery plant — roughly the same distance as Los Angeles is from California's capital, Sacramento.

It's being built in the desert of North Las Vegas, about 30 minutes outside The Strip, in an area that was nearly suffocated by an economic dry spell just two years ago. Fitch Ratings in 2014 warned that the city was close to defaulting on some of its $436 million of outstanding debt, Reuters reported at the time.

The project is ambitious, to be sure. Faraday Future, backed by Jia Yueting, a billionaire Chinese media mogul, wants to complete the factory in roughly two years.

"This is just the beginning," Faraday's VP of global manufacturing, Dag Reckhorn, said at the groundbreaking. "We are laser-focused on making this project a reality for Faraday Future and the community around us."

Reckhorn added that local hiring for the factory has already begun.

Crews will start grading the land at the site this quarter, but there are still some details to be squared away in the meantime — including construction contracts, which Faraday representatives say are being finalized.

The company officially took ownership of all 900 acres of the North Las Vegas property on Wednesday.

Early trepidations that some Nevada state officials had expressed — specifically about the size and availability of Faraday Future's financial resources — have been alleviated.

North Las Vegas Mayor John Lee applauded the work of the state Legislature and Faraday reps for their due diligence in sealing the deal.

"We plan to succeed," he said. Bryan Logan/Businessinsider