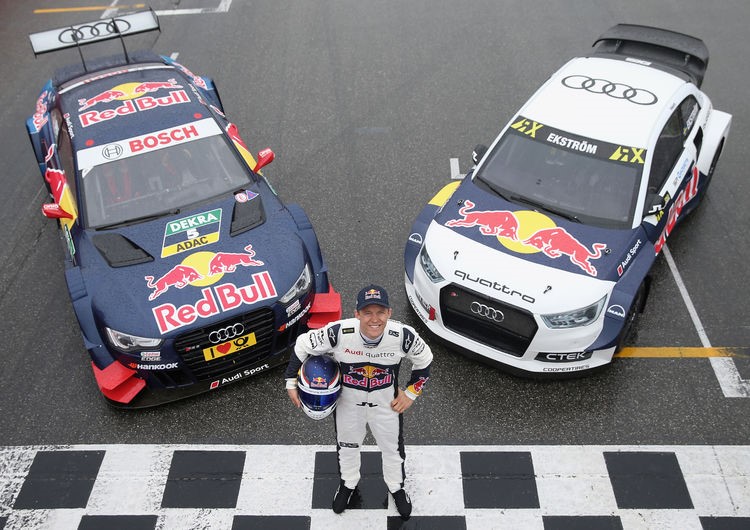 Mattias Ekstrom has contested 161 DTM races in his career, celebrated 21 victories with Audi and seen just about everything in 15 years of competing in the popular touring car series. Still, the DTM opener at Hockenheim from May 6 to 8 will be a special weekend for the two-time DTM Champion. The versatile Swede is venturing a double start, competing in both the DTM and the FIA World Rallycross Championship (World RX).

"Being able to race in the DTM and in rallycross at Hockenheim is like Christmas and Easter combined on a single day for me," says the 2004 and 2007 DTM Champion.

"I'm very thankful to Audi for this unique opportunity. Following the final pre-season tests in my Red Bull Audi RS 5 DTM at Hockenheim, I'm all fired up for the first two DTM races of the new season. We have good chances of repeating last year's victories. That I'll be able to additionally compete with world stars like Ken Block, Petter Solberg and Sebastien Loeb at the wheel of my S1 EKS RX quattro in front of thousands of Audi fans at the Motodrom is fantastic. On Friday and Saturday, I'll definitely be on the grid. On Sunday, the time between the DTM qualifying session and the final rallycross races is pretty short. But, I'd have to qualify for the RX finals to begin with."

A round of the near-600-hp RX cars was held as part of the DTM season opener last year as well. At that time, however, the tight schedule did not permit Mattias Ekstrom to race in his privateer rallycross team, EKS. This year, the starting times of the two DTM races on Saturday (16:00) and Sunday (14:30) are clearly more favorable – at least on Saturday. That is why Head of Audi Motorsport Dr. Wolfgang Ullrich gave his most successful DTM driver the green light for his double start.

"Many of our factory drivers have programs alongside the WEC or the DTM, for instance in Formula E, the Super Formula in Japan or in GT racing. With reach race, they gather additional experience that we benefit from. This applies to Mattias as well, who has invested a lot of passion in building his rallycross team and, what's more, competes in an Audi."

The 2016 FIA World Rallycross Championship will start at Montalegre, Portugal, next weekend (April 16/17). Team EKS is fielding two Audi S1 EKS RX quattro cars for Ekstrom and new signing Toomas Heikkinen from Finland. Thanks to a 560-hp four-cylinder turbo engine and quattro drive, the compact sports car manages the sprint from 0 to 100 km/h in breathtaking 2.4 seconds.

"I'd like to see quattro drive in the DTM as well. Unfortunately, it's prohibited there," says Mattias Ekstrom. "I've always been a quattro fan. Ever since I started driving the Audi S1 in the World RX I love quattro." That's also why his team uses a new hashtag, #welovequattro, this season. New as well is Mattias Ekstrom's adoption of "5," the number of his DTM car, for the 2016 World Rally Championship. "That way, the spectators only have to remember a single
number …"

Besides the DTM and the World Rallycross Championship, there is another reason for Audi fans to travel to Hockenheim on the second weekend in May. The Audi Sport TT Cup, which makes it possible for young drivers to enter motorsport, will be holding its first two events of the season. The DTM and the Audi Sport TT Cup will be racing on the 4.574-kilometer Grand Prix circuit. For the World RX round, a short, 1.24-kilometer track with 60 percent tarmac and 40 percent gravel has been created in the Motodrom.
Tickets and VIP packages for the DTM Festival at Hockenheim are available online on the redesigned Audi Sport website at www.audi-motorsport.com.