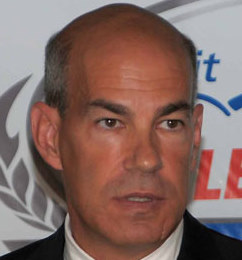 IMSA President and Chief Operating Officer Scott Atherton said there's been healthy and productive dialogue with the ACO, despite the two sanctioning bodies not entirely agreeing on the details of IMSA's new DPi platform, which will debut next year.

"From the beginning of this partnership… it was acknowledged that we were pursuing a common global prototype, albeit with very significant differences in terms of what each entity would utilize that global platform," Atherton told Sportscar365 in an exclusive interview.

"The process has been remarkably successful. It's involved a myriad of decisions, a lot of give and take by all involved. But as often is the case… We're down to the final granular details and there's one example in particular that currently is a topic of discussion."

At the heart of the disagreement has been IMSA's decision not to adopt the FIA and ACO-spec Cosworth ECU and electronics package, which will be outfitted on all Gibson-engined, global-spec LMP2 cars.

IMSA plans to instead allow DPi manufacturers to utilize other ECU options, some of which may have already been paired to existing GT3-based engines, although also still allowing the Cosworth system as well.

It's understood IMSA had initially agreed, in principle, to adopt the spec Cosworth system, on its DPis.

However, Atherton said the decision was reversed based on manufacturer feedback, largely due to the challenge of adapting a single ECU to an expected diverse mix of engines without extensive modifications.

"In those early days when we were penciling out the core elements we wanted to have represented with this platform, [the spec Cosworth ECU] was one example on the list," Atherton said.

"As time has evolved and our dialogue with our participating manufacturers has evolved, there's been a number of learnings that if we knew then what we know now, we most likely would have taken a different approach.

"For us, [LMP2/DPi] is our premier category; it doesn't just allow manufacturer involvement, it depends on it.

"For that reason, we're of the opinion that if we're going to have a top-tier prototype platform that is attractive to mainstream manufacturers, it's important that we embrace the elements they deem important for their involvement."

Atherton also downplayed any potential concern of IMSA not being able to properly balance DPis with the global-spec LMP2 cars, due to both platforms likely running with different ECUs.

"We're confident that all of that can be accomplished and still meet the criteria which we have never wavered, of enabling the DPi and ACO-spec LMP2 car to actively compete with each other on a level playing field," he said.

"We've always committed that the ACO LMP2 car would be the benchmark of performance."

One of the questions that still remains, however, deals with the DPi's eligibility for the 24 Hours of Le Mans, which ACO President Pierre Fillon admitted last month was still not decided, due to what it's felt DPi having moved too far away from the original concept.

Atherton said it had "always been understood and agreed" that DPi-based cars, equipped with constructor-supplied standard bodywork and the global-spec Cosworth electronics, would be eligible, but is now awaiting on a final decision.

"That comes down to the discussion taking place right now," he said. "That was the original understanding and the original agreement.

"We are eagerly looking forward to the next opportunity to meet with the decision makers from the ACO and FIA to finalize not only this subject, but there are other details that still need to be confirmed as well."

Despite Fillon hinting that DPis could be potentially be placed in LMP1 Privateer for Le Mans, Atherton said that no conversations have taken place with the ACO on that subject.

He did, however, admit that it is an interesting idea and that IMSA has briefly discussed it internally when it was reported in the media last month.

The former ALMS President and CEO, who has worked closely with the ACO for nearly the last two decades, said he doesn't expect the current disagreement to have any kind of long-term impact on their relationship.

"Throughout [the ALMS] period, on the outside looking in, it probably looked like we were always joined at the hip and there was never a difference of opinion and we were always pulling on the same end of the rope," Atherton said.

"The reality was that throughout that whole tenure of the ALMS, there were situations that came up, whether it was technical, marketing or business related, that brought us together to discuss our difference of opinion.

"But throughout that period, we've always found a way to get through it. We came through it in a productive, accretive way. There were good results attached to the destination.

"It's a very complex project that's gone remarkably well and I believe will be successfully managed and developed to its full completion." John Dagys/Sportscar365 http://sportscar365.com/industry/atherton-optimistic-on-imsa-aco-relations-global-lmp2-future/