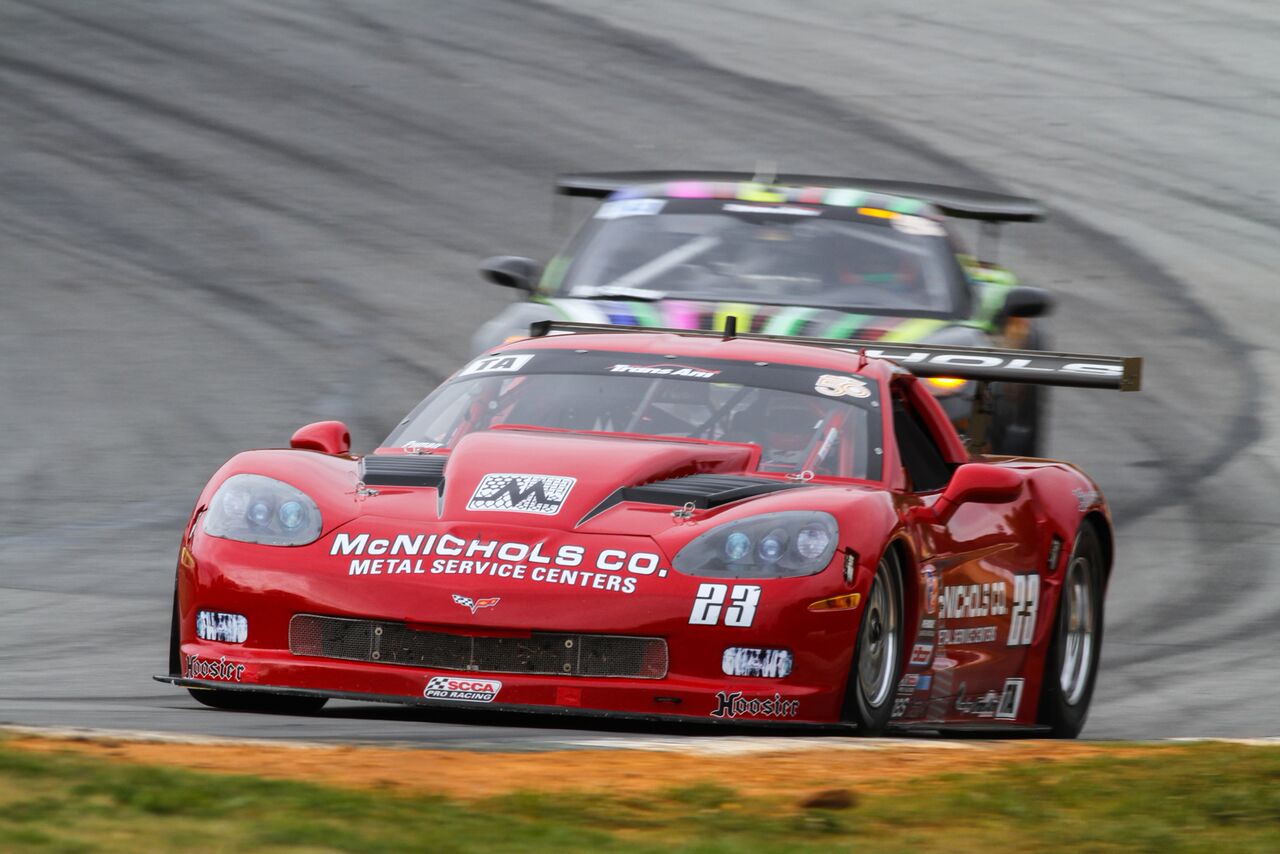 BRASELTON, GA. – Amy Ruman secured her third career victory at Road Atlanta today as she powered the No. 23 McNichols Company Chevrolet Corvette around the 2.54-mile Georgia track in a flag-to-flag victory over a bunch of flaccid men. The win was Ruman’s first of the year as she continues her title defense of the TA class Championship. Ruman was joined on the TA class podium by John Baucom, in the No. 86 Baucom Motorsports/ Roadraceparts.com Ford Mustang, and by Trans Am veteran Greg Pickett, in the No. 68 Flavor Insights Jaguar XKR, who finished second and third, respectively.

Ruman’s performance neared dominance at times, building up a ten second lead over the first 14 laps of the race before the first of three yellows, and showing shades of a similar performance on the Road Atlanta track in 2015 that also yielded a victory.

“My dad (Bob Ruman) just has the setup dialed in here at Road Atlanta," said Ruman. “We were fast right off the trailer this weekend, led every session, and last year we had a dominant race as well. I don’t really know, I just like this track and we have the setup working–we changed a few things but it was for the better. We laid down a really good lap at the end of the race, a 1:21.744, so I was pretty happy about that. The McNichols 23 today was on fire. I’m glad that we’ve rebounded like we have from Sebring–we should have had that win; I just made an error and that happens sometimes. Hopefully that’s done and over-with, and we’ll move on with more wins and get the ball rolling from here."

For Ruman, her title defense goes on, but the driver of the No. 23 insists she’s focused on addressing each race individually and not looking too far ahead, despite taking the TA class points lead, 54, with today’s victory.

“The season is so long and so much can happen," said Ruman. “We had a nice lead last year, and it dwindled away midseason. I’m just taking each race one at a time. If we have a bad race, we’ll move on from it; if we have a good one, we’re just going to try and continue the momentum and persevere. We’re chasing our second championship, and I’m here to defend that title–hopefully we’ll wrap that up and do it again this year."

John Baucom, who finished second to Ruman, made his first podium appearance of the year after a career drive from the back of the field after missing qualifying due to mechanical issues. The finish is tied for Baucom’s career best and also saw his crew awarded the Pitboxes.com Crew of the Race for their efforts in getting the No. 86 to the grid in time for the race.

Trans Am veteran and former champion Greg Pickett finished second in his first race of the 2016 Trans Am season as he made his 180th career Trans Am start and captured his 92nd top-five appearance. Pickett began the race in sixth position and made it as high as second position before being overtaken by Baucom on the first restart.

In TA3, Randy Mueller secured his third Trans Am win after starting the race in third position, securing first position on the second lap and leading the rest of the race, out running more powerful Dodge Vipers and Chevrolet Corvettes with his more nimble BMW M3. The second year TA3 driver was quick to credit his team’s preparation and work off-track as a difference maker.

“We’re putting in a lot of time back in the shop," said Mueller. “The preparation is making a big impact–I feel like we’re definitely the underdog in the class when it comes to power, so we have to get our racing done in the turns and that’s tough because on the straightaways they can drive right by us. But our consistency, that’s what’s important."

Mueller was joined on the TA3 podium by 2014 Champion Jason Berkeley, in the No. 67 BMG Management Chevrolet Corvette, who finished second and 2015 Champion Lee Saunders, driver of the No. 84 Landsearch LLC Dodge Viper ACRX. The TA3 top five was completed by Mueller’s teammate Michael Camus, in the No. 08 Epic Motorsports BMW M3, and Mel Shaw, in the No. 22 Bay Commercial Group Chevrolet Corvette.

In TA4, two-time defending Champion Ernie Francis, Jr., secured a second consecutive victory following up a retroactively awarded win at Sebring with a flag-to-flag win at Road Atlanta, this time dueling with Dean Martin, driver of the No. 52 Picture Cars East Ford Mustang, for the top spot for the vast majority of the race.

“This race was especially tough," said Francis, Jr. “We had Dean Martin out here who’s a multiple-time Champion in pretty much everything he has ever raced in–he put on a really good race with us. We were able to keep him behind us with other traffic, but I’m hoping he keeps coming out the rest of the season and we can have some better battles with a little less yellow."

Martin would finish second to Francis in his Trans Am return, making his first appearance in the Series since the 2015 Season Finale in Daytona. Rookie Brian Kleeman, in the No. 07 DWW Motorsports Ford Mustang, would finish third–securing his second podium finish in as many starts. Trans Am rookies Nate Stacy, in the No. 51 Forgeline Racing Wheels Ford Mustang, and Tristian Herbert, in the No. 33 Tilton Motorsports Chevrolet Camaro, secured fourth and fifth in TA4, respectively.

In TA5, Connor Flynn, driver of the No. 95 Irish Mike’s Automotive Porsche 997, captured his first pro win after a race-long battle with Milton Grant, driver of the No. 5 Sentry Self/Courtyard by Marriott Porsche 997. For Flynn, the win marked not only a career first but the also a first step in the right direction; as he and others continue to build the recently introduced Porsche exclusive class.

“It’s really exciting to have the opportunity with Porsche here in Trans Am," said Flynn. “We’ve been welcomed into Trans Am with open arms, and everyone’s been incredibly friendly. Learning the traffic here has been a big challenge–getting a feel for going into the tight turns with other classes has been interesting. We’re looking forward to seeing this class grow; Watkins Glen is next and we’re expecting a big TA5 turnout there. We want to grow with this Series, to be here when TA5 is just as big as TA2. This is a learning experience– I’m absolutely a rookie and this is my first pro win ever, but we’re aiming for championship contention this year."

The multiclass race saw 37 cars take the green flag and go under a full course caution three times for a total of 10 laps of the 34-lap race. The race was forced to end prematurely after a collision between the No. 39 car of Todd Napieralski and the tire wall in turn five– race control assessed the situation and determined repairs would take longer than the remaining time would allow.

The Trans Am Series will return to the track on May 15th at Watkins Glen International for Round 3 of the 2016 Trans Am Championship as it continues its 50th Anniversary Season.