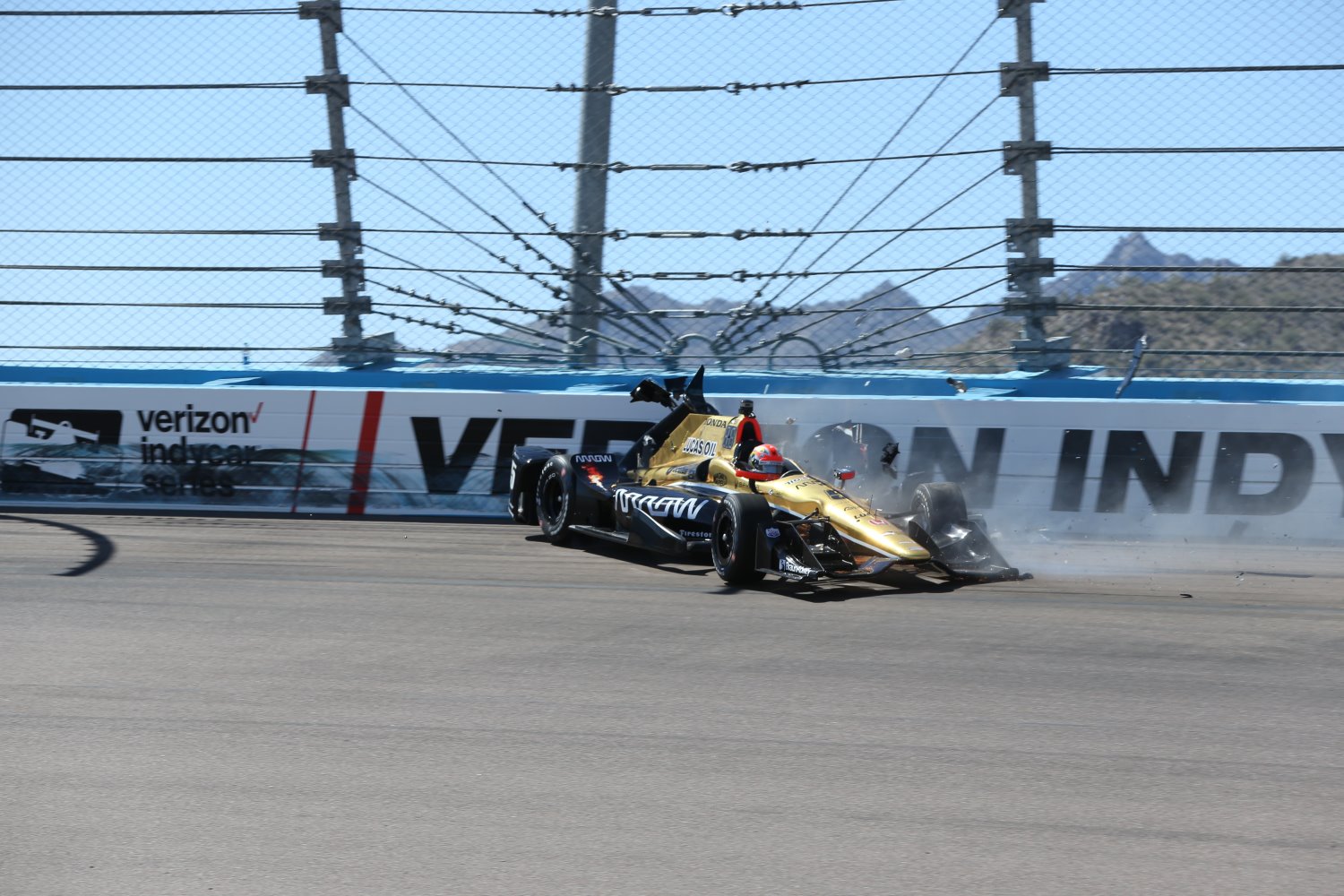 To a certain extent, this past Verizon IndyCar weekend might be titled Deception in the Desert for the Mayor of Hinchtown.

"The bad news, we were running up hill all weekend after a crash in early practice Friday.

The good news? Our great team got us back on the track to the point that we got in maximum laps on a notorious short oval, something that should help us later in the year", said the driver of the No.5 Arrow Schmidt Peterson Motorsports Honda, James Hinchcliffe.

Saturday's Desert Diamond West Valley Phoenix Grand Prix was raced "under the lights" on the Phoenix International Raceway oval. The PIR is a "short oval" – a very fast 1.022 mile (1645m), low-banked, D-shaped tri-oval race track located in Avondale, Arizona, just outside Phoenix and at the foot of the Estrella Mountains.

The 2016 IndyCar race on the PIR (250 laps) is the first in the series since 2005. A huge surprise awaited the teams on Friday, even though they had turned in dozens of practice laps on the oval in February and for some, the Mayor among them, the race would be decided a day early.

A crash in morning practice caused by notorious understeer through the corners settled things.

"For everybody, it's crazy how much the track feels that it's changed since the test," James Hinchcliffe said Friday morning. "I think we got a direction. The unfortunate thing is it's the exact opposite of what we were planning on doing coming into the weekend. That's how different the track feels." The Arrow group bent to the demanding task of getting their car and driver back on the track and succeeded, as Hinch was able to turn in 18 practice laps late in the day. No matter; based on entrant points, he started 22nd and last on Saturday night. He finished 18th, two laps back of eventual winner Scott Dixon.

"Man, a long day at the office for sure. No doubt, missing as much practice as we did hurt us. It took us a couple shots to get the car dialled in to what we needed to feel that we could race those guys.

"Unfortunately by that point we caught an unlucky yellow just after a pit stop and that put us two laps down. It was sort of the same story as St. Pete where we were running around tailing the field but where we were able to keep the leaders behind us.

"The first stint we are running around the tail of the field but managing to keep the leaders behind us to stay on the lead lap and then the first round of green stops, we caught that unlucky yellow and from there again you're kind of just playing damage control. Our last two sets we were picking up a pretty bad vibration half way through the stint, so we could be decent at the start of a run and the second half would be tougher.

"All in all, a long day. This kind of thing is to be expected when you start the weekend off the way we did. I just need to thank my No. 5 Arrow crew once again for all their hard work this weekend and we will bounce back in Long Beach and hopefully get some good points there."