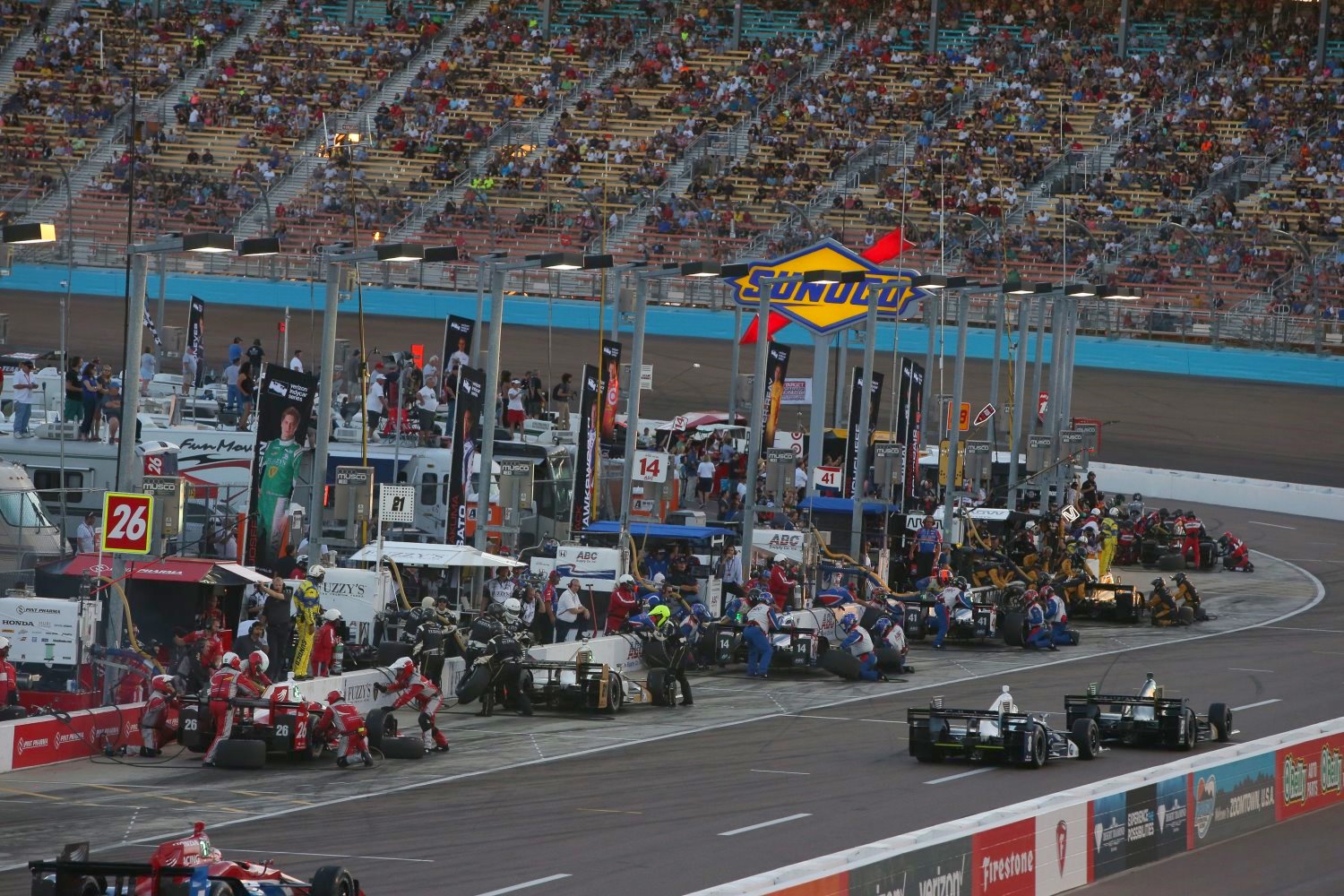 UPDATE I really don’t know what to make of Phoenix promoter Bryan Sperber’s gushing over the commercial "success" of the IndyCar "return to Phoenix" on Saturday night. He told John Oreovicz of ESPN.com that “there was so much buzz and excitement in town about this race coming to Phoenix."

That is a long way around to saying this: If the pathetic crowd that turned out for that race at Phoenix International Raceway on Saturday night represented buzz and excitement in that huge metropolitan area that includes the cities of Scottsdale, Mesa, Glendale and Avondale in addition to Phoenix proper (total population: 4,192,887 of which 3,629,114 are classified as urban dwellers) I’ll eat my shirt. Norris McDonald/Toronto Star

04/04/16 Phoenix International Raceway and its fans, and the Verizon IndyCar Series and its drivers, spent some quality time together Saturday evening and what happened gives the Desert Diamond West Valley Phoenix Grand Prix an opportunity to grow into another major Valley sports event.

About 20,000 fans came out to see Scott Dixon win in IndyCar's return after an 11-year absence. That wasn't enough to make the 250-lap event profitable, but with the strong support from series/team sponsors and local companies buying corporate hospitality suites plus ticket sales above the minimally-acceptable "floor" of 15,000, there's sufficient optimism to continue in 2017.

The most likely 2017 date would be Saturday, April 29, because the NCAA men's basketball Final Four will be played at University of Phoenix Stadium on April 1 and 3. At least one senior IndyCar executive, however, thinks the race should happen Sunday night, April 2, the idea being to attract out-of-state fans and media here for basketball.

For now, it seems unlikely PIR or the track's parent company, International Speedway Corp., would accept a date that would guarantee the race being completely overshadowed in the Valley by college basketball's championship.

Before that decision is made, though, IndyCar's rules and technical experts must start to address the invisible but consequential issue of aerodynamic downforce. For competitors and fans, downforce seemed to be the only downer on an otherwise enthusiastic return to PIR.

Virtually every driver complained that the 5,000 pounds of track-hugging downforce generated by the computer-designed bodywork from Chevrolet and Honda created too much grip and made it tough for the 22 drivers to pass.

"It was so difficult to pass I was just sitting there saving fuel," said third-place finisher Will Power, whose monotone voice made the issue sound almost dire. "It's not the tire that's the problem. It's the amount of downforce."

Most top-level drivers prefer a package of less downforce, higher-horsepower engines and tires which lose their performance edge over the course of the fuel run. That's because it tends to advantage those with the most talent.

But high downforce can help add excitement, like when Tony Kanaan steered left and right four times in a couple of seconds trying to pass Helio Castroneves and Juan Pablo Montoya for the lead around lap 40. Kanaan's talent as an Indy 500 winner and series champion is unquestioned, but he knew those bold moves were possible because his car wasn't going to break loose

A fix isn't as easy as removing a few shapely body pieces which channel airflow in the most efficient way. Less downforce must be well-matched with horsepower and Firestone's tires would likely have to be redesigned.

PIR's narrow racing line and high-grip level is partly the result of the smooth track surface, repaved in 2011.

"It was easy to make a mistake," said Ed Carpenter, twice an Indy 500 pole winner who lost control of his Fuzzy's Vodka-sponsored Chevy and hit the wall. "That's the biggest thing we need to do, is make the racing line wider (so drivers can) use more track. This track has a lot of grip.

"When I look at where we race well, I don't necessarily think it's a high downforce/low downforce thing. It's hard when tracks are really nice (smooth) because it makes one line really preferred. Iowa (Speedway, 7/8th mile oval), it was like this (PIR), but it's gotten bumpy and lost grip."

Still, even as Dixon's Target-Chevy led the last 155 miles, the racing behind him often had the intense, sometimes near frenetic, quality typical of IndyCar's short oval events.

"Those guys were dicing and taking a lot of risk," said Castroneves, who finished 11th after a cut tire. "I was surprised nothing like a big one (multiple car crash) didn't happen."

Dixon understandably had a more positive outlook since the series and teams now have data to analyze and learn from for next year.

"It's our first time back," he said. "For the first effort it was pretty damn good.

"Can we make it better? Yes we can, and next year will definitely be better." Michael Knight/Azcentral.com