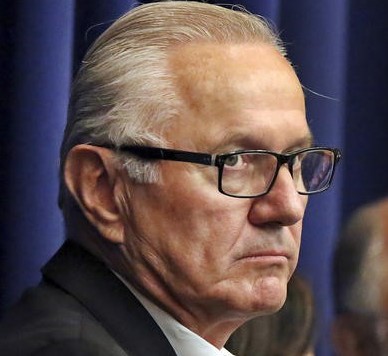 The chief executive of the Los Angeles County Fair Assn., who made more than $1 million in total compensation in 2014 even as the nonprofit organization reported steep financial losses, resigned Wednesday, saying he had “become a distraction" to its work.

James Henwood Jr., who led the association for two decades, will be replaced on an interim basis by former Cal Poly Pomona President J. Michael Ortiz, chairman of the fair organization's board of directors.

Henwood's departure follows a Los Angeles Times investigation that found that he and other executives received lucrative pay and benefit packages despite several years of red ink at the association. The organization stages the annual fair and operates a number of year-round enterprises at the taxpayer-owned fairgrounds in Pomona.

In 2014, the most recent year for which figures are available, the association reported a loss of $3.44 million, federal tax returns show — its fifth straight year of negative results. During that period, compensation for Henwood and his top managers increased dramatically.

Late last year, in response to the Times report, the county Board of Supervisors ordered an audit of the association's finances. The association leases roughly 500 acres of fairgrounds, known as the Fairplex, from the county.

A spokesman for Supervisor Michael D. Antonovich, who called for the audit, said Wednesday the examination could take two more months to complete. It originally was scheduled to be wrapped up this month.

A state audit of the association is also pending.

A spokeswoman for the fair organization did not immediately respond to questions of whether Henwood's resignation had anything to do with the audits or whether he was receiving a severance package. Henwood's contract was due to expire at the end of this year, the association said.

Henwood did not respond to interview requests.

In a statement Wednesday, the fair association said Henwood had planned to leave the organization at the end of 2016 when his contract expired, but moved up his departure. The statement quoted Henwood as saying he was “very proud" of his tenure but adding: “Lately I have become a distraction from the great work that [the county fair association] does. I love this organization too much to let that happen. Accelerating a change in leadership will allow [the association] to refocus on its important role in the community."

Since 2009, the last year the association finished in the black, his total compensation has risen 90%.

Four executives who report to Henwood — the chief financial officer and vice presidents for operations, sales and branding — received total compensation ranging from about $313,000 to $455,000 in 2014.

Henwood, 69, a former Orange County mall manager, had defended the pay levels as appropriate and said losses reflected money reinvested into the Fairplex.

Earlier this year, Stephen Morgan, a member of the association's governing board, which approved the compensation amounts, said the panel believed the salaries and bonuses were justified because of the complexity of the organization.

He noted that the association, in addition to the fair, runs a hotel and conference center at the Fairplex as well as a catering company, an equipment rental firm and trailer and RV parks.

Morgan, president of the University of the West in Rosemead, said Wednesday that Henwood had “served the Los Angeles County Fair Assn. very well," but had determined he had become “a lightning rod" because of the reports on his compensation. Henwood concluded “that it was not in the best interest of the Fairplex to remain," Morgan said.

Ortiz said in a statement that he was honored by his appointment to the interim position and planned to “help the organization maximize … current programs and resources."

The Times also has reported that the association had drifted from its tax-exempt mission as a nonprofit to promote local agricultural interests. Most of its activities have little or nothing to do with farming or farmers, and some neighbors said the association's hosting of rave concerts at the Fairplex had brought noise, drugs and crime to the community.

U.S. Rep. Norma Torres (D-Pomona), whose district includes the fairgrounds, has asked the Internal Revenue Service to investigate the association to determine whether its tax exemption should be rescinded. IRS officials have declined to comment on the matter.

Through a spokeswoman, Torres said Wednesday that she hoped “new leadership will bring about long-needed changes to not just make the Fairplex a profitable venture, but also a good neighbor for the surrounding communities. Changing leadership alone, however, will not solve the problem.

“For years the Fairplex has benefited from tax-exempt status and from other local and state resources, yet they haven't held up their end of the bargain. Moving forward they must account for how these resources were used in the past and commit to greater oversight and accountability of their management and operations to prove they can be good stewards of taxpayer dollars and responsive to the concerns of local residents."

Meanwhile, The Times reported this month that residents of the association-run trailer park had long complained that the property was being neglected. They noted that dozens of sewer pipes were left uncapped, emitting a foul odor. Residents said bathrooms were in disrepair, a laundry room was shuttered, and overhead power lines had peeling insulation.

At the same time, the association regularly raised the tenants' rent and had for years improperly collected from them a “transient occupancy" tax, the type levied on hotel guests. The tax amounted to 10% of the monthly rent for trailer spaces. It was unclear how long the tax had been collected, but some residents say they had paid it for 10 years or more. The collections stopped last year after a tenant complained.

Henwood later told The Times he regretted not having paid more attention to problems at the trailer park.

The L.A. County association paid its executives far more than other fair organizations in California, including those that reported better financial results.

The head of the fairgrounds that holds the San Diego County fair, for example, had a salary-and-benefit package in 2014 of about $194,000, less than a fifth of Henwood's compensation. The manager of the Orange County Fair made about $212,000 that year.