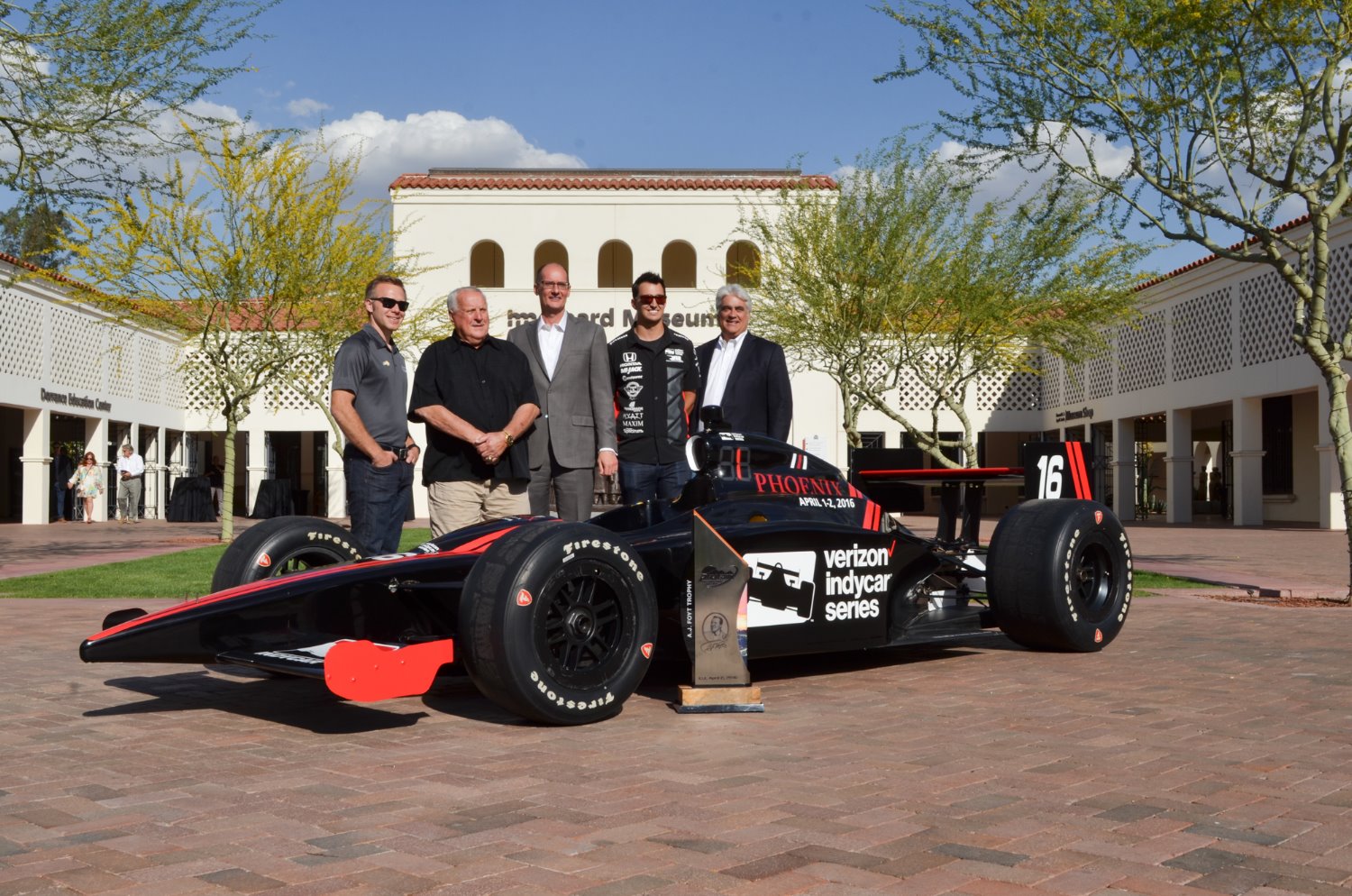 The quotes and images included here were gathered from Wednesday's press conference featuring drivers and executives from both PIR and the Verizon IndyCar Series as the A. J. Foyt Champions trophy was unveiled at the Heard Museum in downtown Phoenix:

"When we had the opportunity to bring the Desert Diamond West Valley Phoenix Grand Prix to PIR, we knew right away that this was going to be an incredibly big moment for race fans here in Phoenix and of course the history at Phoenix International Raceway. We thought about what is the best way to pay tribute to that, and something that could be enduring year after year. Right away, we thought about getting a special, perpetual trophy and we could think of nobody better to name that trophy after than the man who won our very first race in 1964, the legendary A.J. Foyt.

"Not only is it a beautiful design, but the base of the trophy is made out of Grand Canyon Onyx. It's a very special stone that is only found here in Arizona. To have a very special stone paired with a special race in honor of a very special driver, for us, there just couldn't be anything better than that. We're tremendously excited about this race and about this trophy. We think Friday night, there will be records that will be set, so whoever claims that A.J. Foyt Champions Trophy will also probably set a race record as well. Big night in store April 2 for the Desert Diamond West Valley Phoenix Grand Prix."

"I really owe Phoenix a lot. A lot of you probably remember the late Clint Brawner and Jimmy Bryan from here. Clint Brawner was the one who gave me my first ride at Indianapolis Motor Speedway. I'll never forget, I drove all the way out here from Houston and had about two dollars left. I was driving up and down 7th, he didn't say street or avenue. I almost called him three times and said, ‘Clint, I don't see no bank across the street from your house. He said where are you at? I said 7th Street, he said, ‘No 7th Avenue.' My heart was beating so bad, I thought now I have the chance to go to Indy and I can't find the guy's house.

"Phoenix has been great in a lot of ways for me. You can't forget the people who helped you start. I'd say right here in Phoenix is where I got my big start. I'm just glad to be back here."

Graham Rahal, driver of the No. 15 Indy car for Rahal Letterman Lanigan Racing:

"It's great to be back here. I had actually never driven here until last fall. I spent a lot of time here with my dad over the years and watched so many races. I went back to watch that 1992 race here just to watch how it went, because I saw the picture from when I was in Victory Lane. I can also admit, sadly, I broke that trophy with a soccer ball playing soccer in dad's trophy room not too many years after that. So I've spent a lot of time here, but never drove here until last fall. It's awesome to get out here. I know the track is a little different, but the fun factor is extreme. It's really cool. Like we saw at the test, the speeds here are unreal. It's so much fun, and I think from a driver's standpoint, the demands are going to be so high physically though this race. It's going to be easy to make mistakes, which should also be nice because it's a challenge. I think we'll create some exciting racing for everybody. It's great to see what everybody at has done here because driving around seeing the billboards and promotions is awesome."

Ed Carpenter, team owner and driver of the No. 20 Indy car for Ed Carpenter Racing:

"This place is really special to me. I grew up spending basically all of my Spring Breaks out here when I was young, Graham (Rahal) was probably the same way, coming out for the IndyCar races. I've been coming here for a long time as a fan, and then competed in the Copper World Classic from 1995 to 2003 as well before running and IndyCar in 2004. So really happy to be back. It was an awesome racetrack then, and it's still an awesome racetrack and really looking forward to the weekend. I know Bryan (Sperber) and his team has put in a lot of hard work and we're excited to get out there and put on a good show."

"It kind of completes the circle, doesn't it? The IndyCar series is deeply rooted in its history, but it's just part of this big ecosystem and PIR has had such a big part in the sport's history. I want to thank Bryan and your whole team for jumping at the opportunity and really making it all possible. We are really looking forward to an unbelievable weekend. I just think that when younger drivers, when they can absorb A.J.'s stories and all of the legends of our sport that are still with us and so much a part of the sport, it just completes that loop. It really says so much about the future of the sport because it's in good hands with the guys that are still here and the next generation can take us a long way in the future. We're really glad to be here."