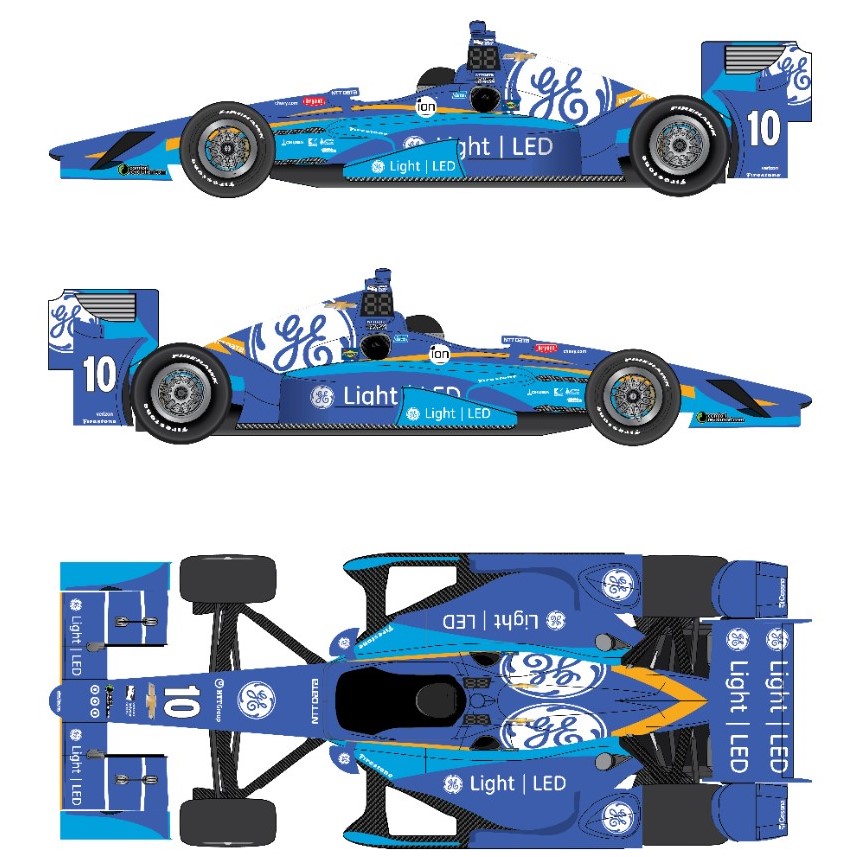 Chip Ganassi Racing this morning is unveiling a GE paint scheme for Tony Kanaan for the Verizon IndyCar Series' return to Phoenix Int'l Raceway this weekend. The activation, which will see GE tout its recently released Light LED lightbulbs on Kanaan's No. 10 Chevy, is part of long-running Ganassi sponsor Target's pass through program with its vendor partners. The deal for Saturday's Desert Diamond West Valley Phoenix Grand Prix is one of many tie-ins between GE and Ganassi over the years. In the first race of the season at St. Petersburg, the No. 10 was sporting the colors of Kanaan's usual primary sponsor, NTT Data. Adam Stern/SportsBusinessDaily.com

As an extension of the long-standing partnership with CGRT, GE will feature the recently introduced GE LIGHT LED branding on the No. 10 Chevrolet.

Tony Kanaan, Driver, No. 10 GE LIGHT LED Chevrolet: “I can’t get wait to get back to Phoenix this weekend and I’m excited that I’ll be representing GE for the first time at the historic oval. I’ve had a pretty good track record at Phoenix with two wins and another podium-finish, so hopefully I can bring GE a win. I love keeping up on all of the new technology, so it’s great to continue to have a partner on the No. 10 Chevrolet that appreciates and understands the constantly evolving world of technology."

Daraius Patell, North America Consumer Lighting GM: "With more than a century of engineering and technology that goes into each of our lighting products, we can appreciate the science and physics that go into each Indy car race. That's why we're proud to represent Tony and the Chip Ganassi Racing team, and we'll be cheering for a win this weekend at the oval in Phoenix."