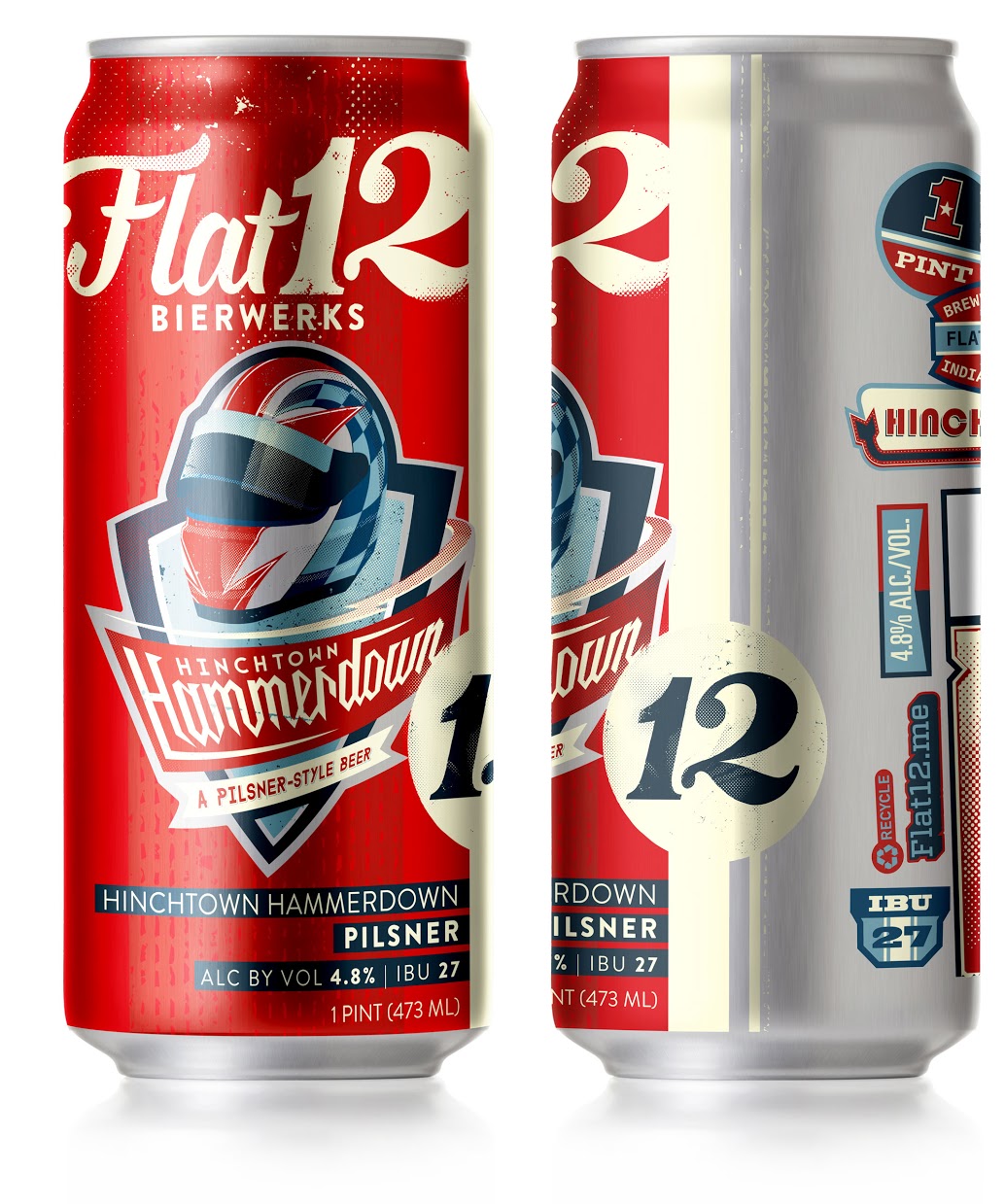 On April 2, 2016, Flat12 Bierwerks will release Hinchtown Hammerdown, a limited edition, pilsner-style beer brewed in partnership with Verizon Series IndyCar driver, James Hinchcliffe. The collaboration beer is brewed every year for the month of May — which in Indianapolis, is all about racing.

This year’s release is made all the more momentous by James Hinchcliffe’s full recovery and return to racing after his involvement in a major crash at the Indianapolis Motor Speedway May 18, 2015.

That wasn't how the season was supposed to end for one of the brightest racing talents out there, but now #HinchI5Back and better than ever. Flat12 couldn’t be more excited for Hinchcliffe’s return to the track and for the return of this specialty brew,Hinchtown Hammerdown.

Flat12 tweaked the Hinchtown Hammerdown can design this year in celebration of Hinchcliffe’s comeback and to commemorate 100 years of racing at the Indianapolis Motor Speedway — two tremendous racing achievements. Flat12 Bierwerks and Schmidt Peterson Motorsports are encouraging fans to rally around their IndyCar driver, James Hinchcliffe, by sharing the hashtag #HinchI5Back.

Hinchtown Hammerdown is a crisp and refreshing pilsner-style beer now lagered and cold-stored. It’s smooth, drinkable, and goes down fast — the perfect beer for a day at the track! James Hinchcliffe is the only IndyCar driver to have his own beer. “Being the mayor of “Hinchtown" has its perks," he said on brewing the limited-release May beer. Starting the week of April 2nd, 2016,Hinchtown Hammerdown will be available at select bars, restaurants, and package stores all around Indianapolis, and also served at the Indianapolis Brewery as well as the Jeffersonville, IN taproom.

“Flat12 is a fantastic brewery and I’ve been a long-time fan. When creating the beer 4 years ago, we decided to go with a lager, an easy-drinking beer for a day at the track. We’ve created a great brew, but for the 100th year celebration, we wanted to go even bigger. So at the beginning of May we will release my second Flat12 collaboration beer, The Bricks— a Red IPA brewed with milk sugar, in honor of a great tradition in motorsports," said James Hinchcliffe.

With 100 IBUs and a full tank of Centennial hops, The Bricks is the perfect beer to honor 100 years of racing in Indianapolis. This brick red IPA is complimented by the addition of milk sugar, to commemorate the tradition of the 500 winner drinking a bottle of milk on Victory Lane and kissing the bricks. This Indianapolis brewery, named after a classic game-changing racing engine, and the fast-rising IndyCar driver, Hinchcliffe, created a beer that runs 2.5 mile laps around the others. The Bricks is a very limited, first-time brew, and will only be released at the Indianapolis taproom on draught and in cans.

James Hinchcliffe took to the production line at Flat12 Bierwerks to help in the brewing of the company’s new beer.

It will be available beginning May 6 and will be packaged in 12-ounce cans.

Hinchcliffe's relationship with Flat12 Bierwerks began in 2012 with the production of Hinchtown Hammerdown, a pilsner-style beer. WishTV