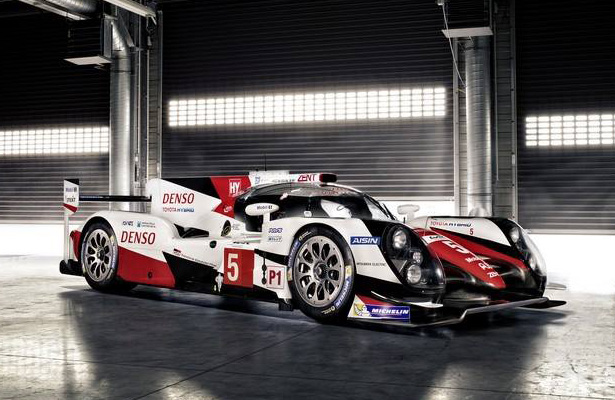 Toyota Gazoo Racing has taken the wraps off its new TS050 Hybrid Thursday at Paul Ricard, ahead of the FIA World Endurance Championship season.

Following reveals by Audi and Porsche, the Japanese automaker is the third and final LMP1 manufacturer to unveil its 2016 challenger, and is arguably the biggest departure from its previous model.

The TS050 Hybrid features an all-new 2.4-liter twin-turbo V6 engine combined with a battery hybrid system, which is now running in the 8MJ hybrid subclass for the first time.

It marks Toyota’s third all-new car since joining the WEC in 2012 and first with a turbo engine, after having previously utilized a normally aspirated V8 with super capacitor hybrid storage.

Even with the switch to batteries and the highest hybrid subclass, the TS050 Hybrid will continue to utilize motor-generators on the front and rear axles, but the front unit relocated to allow for better air flow.

The car also features an updated gearbox in order to handle the significant increase in torque delivered by the turbo engine, along with an all-new aero design.

“The team has worked extremely hard on the TS050 Hybrid, which is the result of a close, productive cooperation," said team director Rob Leupen.

“Our innovative motorsport technology, as well as the R&D opportunities in Cologne, is contributing to making ever-better cars and the development of road car engineers."

With LMP1 regulations seeing for a reduction in fuel flow and energy, Toyota is hopeful its new powertrain solution will deliver the best performance.

“As motorsport engineers, we want to always increase the performance of the powertrain so it was important to compensate for this reduction with a more efficient, powerful powertrain," said Hisatake Murata, general manager Motor Sport Unit Development Division.

“Combined with our move into the 8MJ class, this will give us significantly improved torque compared to the previous powertrain; this was a key target for the new car."

More than 13,000 miles have been completed in pre-season testing ahead of the nine-round championship, which kicks off next month in Silverstone.

Former World Champions Anthony Davidson and Sebastien Buemi will again be rejoined by Kazuki Nakajima in the newly numbered No. 5 car.

Toyota test and reserve driver Kamui Kobayshi replaces the now-retired Alex Wurz in the No. 6 entry alongside Stephane Sarrazin and Mike Conway.

Wurz, meanwhile, remains on as an advisor and brand ambassador for Toyota.