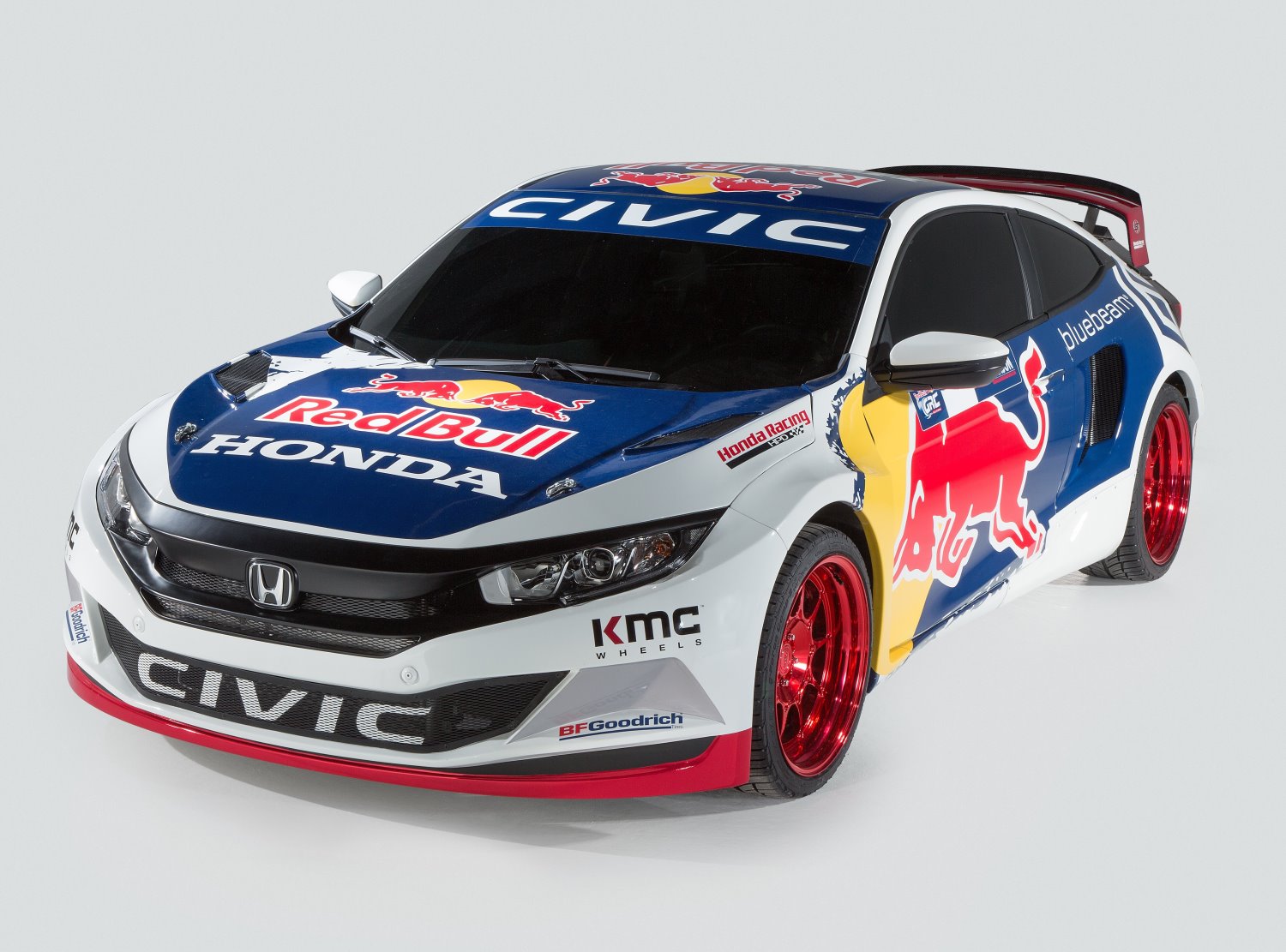 Today Honda unveiled the new racing livery for its Civic Red Bull Global Rallycross racecar, announcing plans to campaign the all-new turbocharged 2016 Civic Coupe in the 2016 series in partnership with Red Bull and championship-winning race team Olsbergs MSE. The Honda Civic Red Bull GRC team will begin racing on May 21 in Phoenix at the first event of the season.

Developed from a production-model 2016 Civic Coupe chassis by renowned builders and racers Olsbergs MSE (OMSE) with technical assistance from Honda Performance Development (HPD), the all-new Civic Red Bull GRC car is built to withstand the rigorous demands of racing in a series that emphasizes repeated aggressive acceleration and varied terrain. The car will boast more than 600 horsepower, turn in a 0-60 mph time of 1.9 seconds and is designed to handle the 70 foot table-top jumps featured on each racetrack.

“Global Rallycross is seriously extreme racing, and it's a terrific platform to showcase the new Civic Coupe to an enthusiastic, performance-minded young audience," said Nick Lee, National Advertising Manager, American Honda Motor Co, Inc. “We won’t encourage our customers to take 70-foot jumps out on the street, but we will use this platform to tell people about all the incredible technology and performance capabilities of our new Civic Coupe."

Driving the 2016 Honda Civic Red Bull GRC car for Team Honda are experienced competitors and former teammates Sebastian Eriksson and Joni Wiman. Eriksson, from Sweden, and Wiman, from Finland, have both made their mark in the series, with Wiman winning the 2014 Global Rallycross Championship and Eriksson finishing second in 2015. The two met in competition during the 2013 GRC Lites season, where Eriksson finished runner-up to Wiman, who swept the series.

Red Bull Global Rallycross is designed to produce some of the fastest and most exciting racing in motorsports, pitting small production-based cars against each other in door-to-door racing featuring dirt, asphalt, and table-top jumps. The 2016 Honda Global Rallycross Civic will make its racing debut on May 21 and May 22 with a double header event at Wild Horse Pass Motorsports Park in Phoenix, Arizona. For more information visit www.RedBullGlobalRallycross.com.