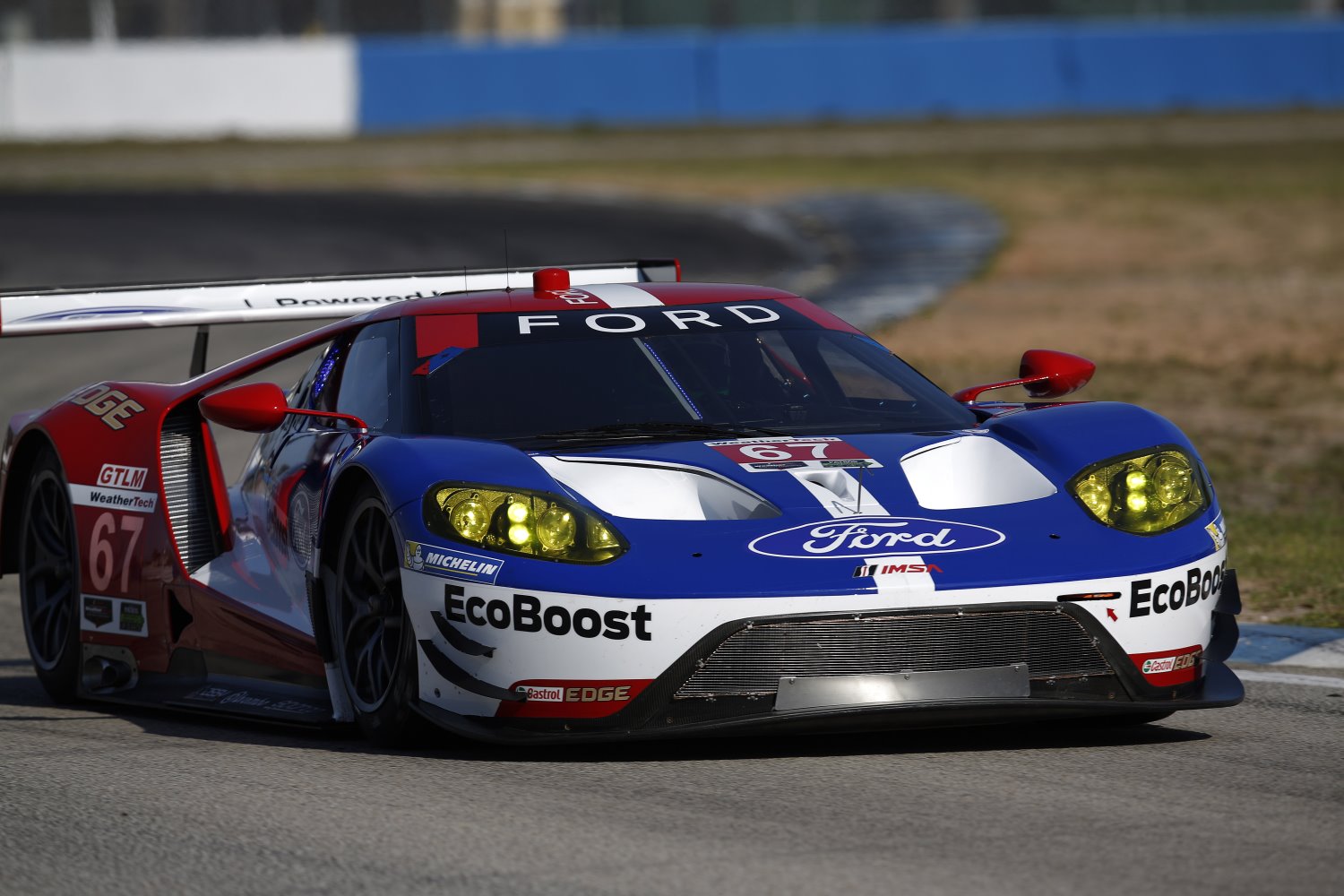 While there weren't any championships or podiums to celebrate, Verizon IndyCar Series drivers participating in an eventful Mobil 1 Twelve Hours of Sebring endurance sports car race on March 19.

Ryan Hunter-Reay, normally pilot of the No. 28 DHL Honda for Andretti Autosport in the Verizon IndyCar Series, was part of the Visit Florida Racing team that finished fifth overall and in the Prototype class after battling for the lead late. Scott Dixon switched from his No. 9 Target Chip Ganassi Racing Chevrolet to race for the first time in the Ganassi team's Ford GT, which finished fifth in the GTLM class, with Ryan Briscoe among his teammates.

Heavy rain and lightning hindered conditions during the 12-hour event on the 3.74-mile Sebring (Fla.) International Raceway road course, forcing the race to be red-flagged for 2 hours, 15 minutes.

The No. 90 Chevrolet Corvette DP that Hunter-Reay co-drove was battling for the lead in the final hour with teammate Marc Goosens at the wheel, but contact with another car dropped Goosens to fifth, where he finished 18.078 seconds behind the winning Honda HPD Ligier JS P2 that backed up its triumph in the Rolex 24 At Daytona in January with the Sebring crown.

"We had a good run there in the middle of the race, we didn't just have the pace for the leaders," Hunter-Reay said. "We lacked a little balance there. It was fun. I had a good time in the car. The cooling in the car kind of went south, so that made it a little difficult for us today. We know what we need to do heading into Long Beach and hopefully that'll be the race where we break through."

The IMSA WeatherTech SportsCar Championship is scheduled to race again during the Toyota Grand Prix of Long Beach weekend April 15-17 with the Verizon IndyCar Series. Hunter-Reay will drive in both events.

Meanwhile at Sebring, Dixon – the reigning Verizon IndyCar Series champion – pushed the Ganassi No. 67 Ford GT into the lead for the first time in a race in its celebrated return to sports car racing this year. The car eventually finished fifth in class and 15th overall, but on the same lap as the GTLM winner.

"Conditions were very mixed," Dixon said. "We had lots of rain and obviously a red flag, too. I think the car performed well. We got to the end, which was the main objective. I think the car had signs of good speed. Strategy, I think we missed a little bit, but obviously good progress since Daytona. Everything's moving the right direction."
The primary target for the program is June's 24 Hours of Le Mans, where the Ford GT won 50 years ago. Last week, Dixon was named one of the drivers for the event.

Pigot helped his Mazda equal its best finish of sixth overall and in the Prototype division. The Florida native is slated to drive three races this season in the No. 16 Rahal Letterman Lanigan Racing Honda in the Verizon IndyCar Series, including the 100th Running of the Indianapolis 500 presented by PennGrade Motor Oil.

"It was pretty crazy race out there," Pigot said of Sebring. "Lots of drama and excitement all through the race. It was cool to have my first experience in this race and with Mazda. I went through quite a bit of anything from wet to dry, from day to night. I definitely got to experience it all. Big thanks to the guys. They had good pit stops all day and the car was great as well."