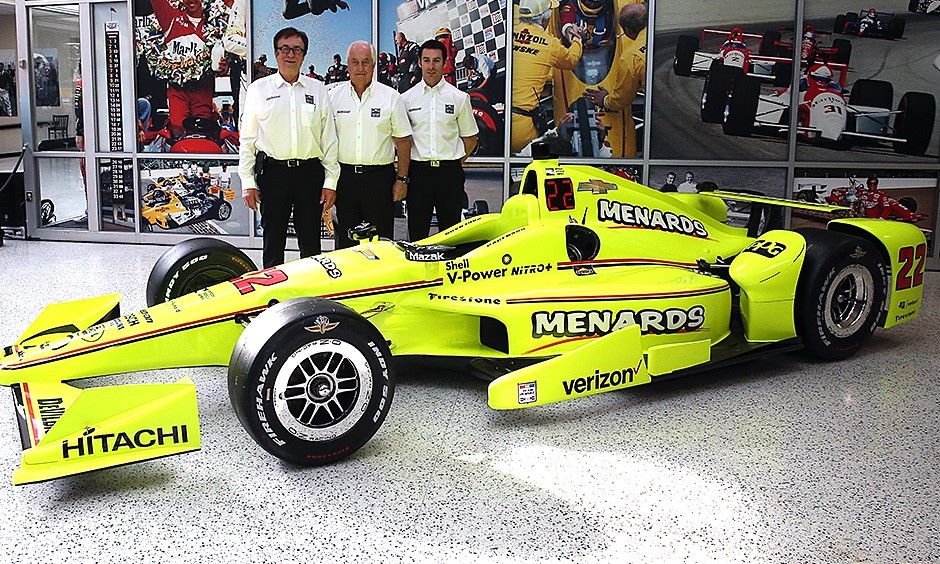 UPDATE Added photos of the livery Pagenaud will carry.

03/22/16 Team Penske announced today that Menards, the industry-leading home improvement store company with locations throughout the Midwest, will sponsor the No. 22 car and driver Simon Pagenaud for two races during the 2016 Verizon IndyCar Series, including this year’s 100th Running of the Indianapolis 500 on May 29th. Menards will adorn the side of the No. 22 Team Penske Dallara/Chevrolet both at the Indy 500 as well as the series’ return to Road America in June. The company will also be an associate sponsor on the No. 22 Team Penske car for the balance of the 2016 season.

Today’s announcement marks a return for Menards to the Verizon IndyCar Series. The Wisconsin-based company raced as a sponsor in INDYCAR from 1996-2003 but the return to action this season represents Menards first taste of series competition in 13 years. A Menards-sponsored car captured the Indy Racing League title in both 1997 with driver Tony Stewart and in 1999 with driver Greg Ray. With its track record of success in INDYCAR, Menards returns this season with a clear goal of winning its first Indianapolis 500. The company’s cars earned two Indy 500 pole positions in the past – with the late Scott Brayton in 1995 and Stewart in 1996. The top finish by a Menards-sponsored car in the Indy 500 came with Stewart during his championship season of 1997, when he finished fifth. Joining forces in 2016 with Team Penske, winners of a record 16 Indianapolis 500-Mile races, Menards hopes to produce its first win at Indy in the historic 100th running of the “Greatest Spectacle in Racing."

“Menards has a long and successful history in motorsports and we are excited to welcome them to Team Penske in 2016," said Roger Penske. “John Menard and the entire Menards company have been long-time supporters of INDYCAR racing and it is special to have them on board as we celebrate the 50th season of Team Penske and the 100th Running of the Indianapolis 500. We will be working hard to bring them their first Indy 500 victory with Simon this May and add to our team’s overall success at Indianapolis."

In addition to its history in INDYCAR competition, Menards has been a long-time supporter in other forms of motorsports, including NASCAR.

“INDYCAR and the Indianapolis 500 have been a huge part of Menards for as long as I can remember," said John Menard. “We’ve enjoyed a great amount of success, but the one thing missing is winning the Indy 500 in the month of May. What better team to return to the series with than Team Penske. Roger and his team have proven that they know how to win the big races. I think Simon will do a great job and I look forward to Menards becoming a part of the history of Team Penske."

“I think we all remember watching the Menards Indy car competing with all of its success on track, so it’s amazing to become a part of that history," said Pagenaud, who finished 10th at the Indianapolis 500 last season, leading 35 laps in his first start in the legendary race for Team Penske. “I’m excited to welcome Menards to the No. 22 Team Penske Chevy, not only at Indianapolis, but also at Road America, just down the road from their company headquarters. I am really looking forward to representing them this year and the opportunity to go out and win races wearing the Menards colors."