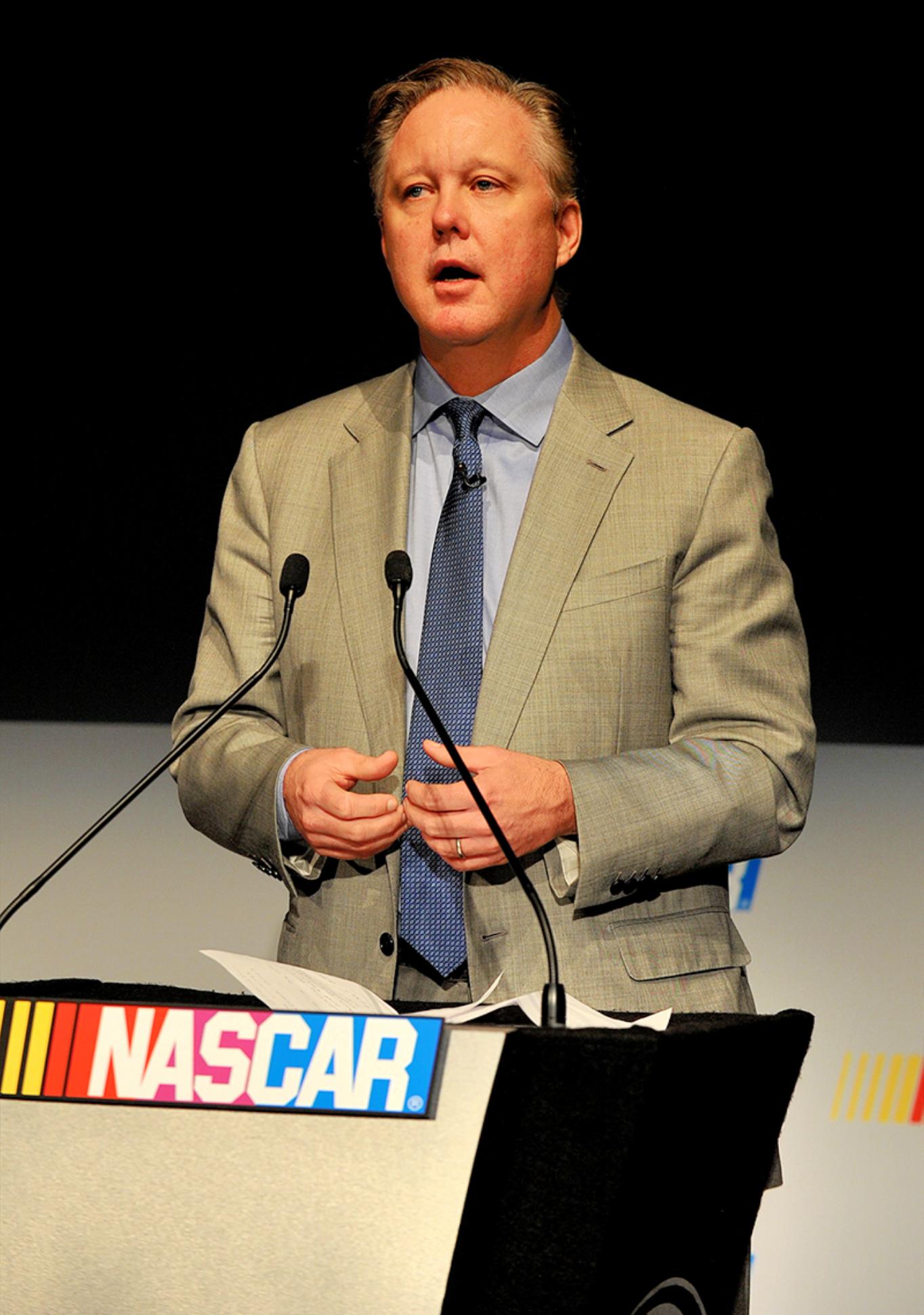 UPDATE With the newness of the current NASCAR racing season yet to wear off, Brian France — the sanctioning body's chairman and CEO — discussed the possibilities of more new touches coming to stock-car racing's future.

The possibility of new manufacturers, new tracks and a new premier-series entitlement sponsor were just some of the topics France discussed in an impromptu phone interview Friday afternoon with SiriusXM NASCAR Radio.

SiriusXM host Dave Moody said callers often asked whether they could anticipate the return of Dodge or another manufacturer to join the three existing automakers — Chevrolet, Ford and Toyota — that currently compete in the sport.

"There is some interest by a couple of different manufacturers, and we would be open to that in the right conditions," France said. "A lot of the car companies are understandably looking at the terrific job that Toyota has done by partnering with NASCAR and the success and all the things that come along with that. They've been an incredible success story for a car manufacturer looking to come into a sport that's very difficult to come in, compete and win every weekend.

"But there's interest and this is obviously the biggest opportunity in auto racing in North America and we would probably say the world, so it's always on some attention span one way or the other."

France was less optimistic about the prospects of a new raceway joining the 23 facilities that currently host NASCAR Sprint Cup Series events, citing economic conditions. Those 23 tracks, plus the handful of venues that host other national series events, have their race dates guaranteed through a five-year sanctioning agreement that went into effect this year.

"The economy, obviously — going back to '08 — has been either slow or non-existent depending on which industry you're in, so that's been a headwind for a lot of people, including our industry," France said. "I don't see that any time soon, but that has a tendency to go in waves, so when things are in a different situation with the economy and other things, you tend to see two or three more tracks going at once. …

"Nothing immediate, but I will say of course the tracks are making sure the facilities are ever-better and have more amenities for our fans."

France also mentioned the negotiations and talks with prospective companies to replace Sprint as the entitlement sponsor of NASCAR's top division. The cellular phone provider signed on as the series' title sponsor as Nextel in 2004, but its run will end at the conclusion of 2016.

"Good," France said in characterizing the nature of the discussions. "It's the most coveted position in sports because of the rights that are granted, so we've got a good group of companies that are on our short list and so hopefully in the coming weeks or months, we'll get to the right place on that.

03/19/16 After two photo finishes and a bevy of side-by-side racing to start the 2016 NASCAR Sprint Cup Series season, NASCAR Chairman and CEO Brian France joined SiriusXM Speedway host Dave Moody on Friday to discuss the early-season returns on the new aero package employed in the sport's top series. "Well it's off to a really good start obviously," France said.

"It's not a situation where we're willing to say everything is perfect because we're always searching for terrific things on the racetrack. The low downforce [package], in combination with Goodyear producing a really good tire to match up to that, has given the drivers more of what they want and they're putting on one heck of a race."

The 2016 season opened with Denny Hamlin capturing the Daytona 500 by a scant .010 seconds over Martin Truex Jr. That finish was followed by a race at Atlanta Motor Speedway – the first with the new lower downforce aero package – that saw a record number of green flag passes for the lead (44). And last Sunday in Phoenix, Kevin Harvick edged Carl Edwards to the finish line by the identical Daytona margin of victory of 0.010 seconds. But it was the end-of-race, sheet-metal crushing aggression displayed by both Harvick and Edwards at the end of the race that most impressed France.

"You've heard me say many, many times, that's classic NASCAR racing when that happens," France said of the contact made between Harvick and Edwards at the close of Sunday's race. "But it's interesting to note that not all the drivers that we have, present or past, would have made the moves that Carl Edwards tried to do to get around Harvick. Harvick did a great job. They both did a great job. But that's classic NASCAR. We expect that."

In the wide-ranging 12 minute interview, France also touched on the potential of new manufacturers entering the sport, joining the current stable of Chevrolet, Ford and Toyota. "There is some interest, and by a couple of different manufacturers and we would be open to that in the right conditions," France said.

"I think a lot of the car companies are understandably looking at the terrific job that Toyota has done by partnering with NASCAR and the success and all the things that comes along with that. They've been an incredible success story for a car manufacturer looking to come into a sport that's very difficult to come in, compete and win every weekend. But there's an interest. And this is obviously the biggest opportunity in auto racing in North America." NASCAR Wire Service