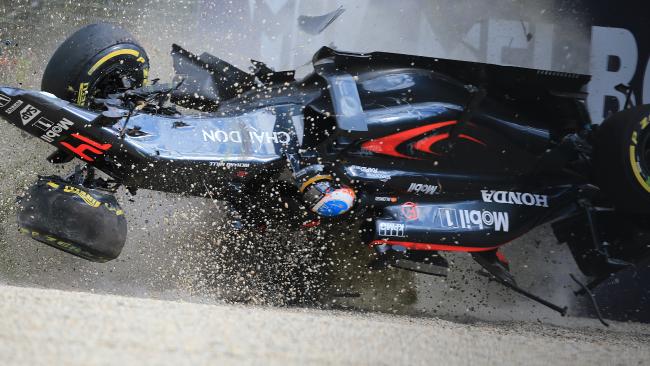 (GMM) Fernando Alonso escaped with little more than a sore knee after a terrifying crash during the Australian grand prix.

"I'm fine," he told Spanish reporters after checking out of the medical center at Albert Park.

The McLaren-Honda had rolled and flipped after striking the rear of Esteban Gutierrez's Haas at full speed in the braking zone for turn 3.

"As I was so close I lost the braking point," he said.

"I'm fine," Alonso added. "Considering everything I'm disappointed about not finishing the race and scoring points, and also for the destruction of the car and probably losing the power unit."

As for any injuries, Alonso got the green light from the medical staff to not even bother with further checks in hospital.

"I feel fine physically but everything hurts a little because you move around so much at those speeds. The knee is what bothers me most as it hit the steering column but I feel very lucky.

"It was a scary moment and I'm happy that I can stand here. I am very grateful and would like to express my gratitude to the FIA for the safety standards. It's the only reason I'm still alive," Alonso added.

He said he does not blame Gutierrez, the Mexican who made his return to F1 racing on Sunday after a year as Ferrari tester.

"No, I do not see him to blame as we were fighting on the track. I tried to take advantage of the slipstream as well as possible, swerving out at the last moment," said Alonso.

The crash was a heart-stopping moment in an otherwise thrilling season opener, but the red-flag it triggered may have spoiled the rhythm of Sebastian Vettel's quest for victory.

"You can argue the red flag didn't help us," said the Ferrari driver, "but ultimately I'm very happy with third."

Observers were also surprised when the defeated Lewis Hamilton embraced winner Nico Rosberg after the race, but Mercedes boss Toto Wolff said the reigning world champion had no reason to be annoyed.

"I don't think it's a blow for Lewis because the pace was there and it was the start that compromised him," he told BBC radio. "It will not be a big blow for him."