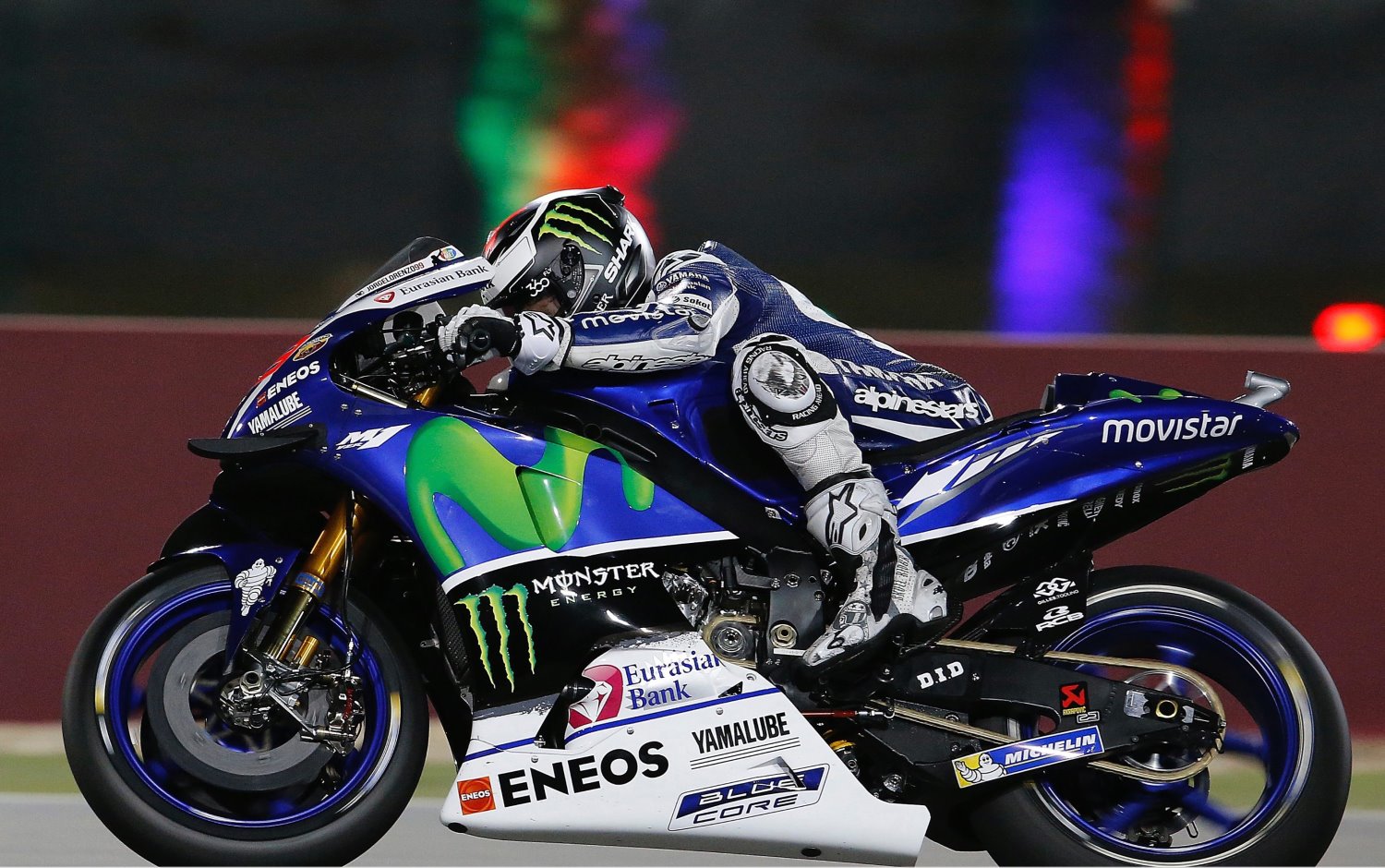 Riders in the MotoGP World Championship completed their first official practice session of 2016 with Lorenzo ahead of Rossi and Iannone.

Due to the Losail International Circuit’s location, the first sessions of the day are frequently hindered by a dirty track as a result of sanding blowing over the circuit. Fortunately for riders in the MotoGP World Championship, the Moto2 and Moto3 class riders did most of the work to prepare the track during their first sessions. However, the junior classes also have a different tyre supplier, thus leaving a different rubber on the track surface that in the past has changed grip levels.

During the Qatar Test, Jorge Lorenzo (Movistar Yamaha MotoGP) had set a best time of 1’54.810, but riders were aware this would be an ambitious time due to rain between the test and FP1 changing the track significantly. The reigning MotoGP World Champion pushed from the start of the session, stringing together fastest lap after fastest lap in the first ten minutes. A best time of 1’55.440 on his 15th lap saw Lorenzo lead the way.

With a total of 17 laps in the first practice session, Valentino Rossi (Movistar Yamaha MotoGP) was able to work his way to second. A lap of 1’55.707 put him 0.267s back on his teammate as the Movistar Yamaha MotoGP team asserted themselves over the rest of the field. Both Rossi and Lorenzo looked comfortable throughout testing and have continued their rapid pace into the race weekend.

Try as he might, Andrea Iannone (Ducati Team) who set a 1’55.736, was unable to get within a quarter of a second of Lorenzo. Iannone’s MotoGP podium debut came here in Qatar in 2015, many are expecting the Ducati man to be in contention for victory at the Commercial Bank Grand Prix of Qatar, the long straight playing to the strength of the new Ducati.

Another impressive Ducati was the Avintia Racing Ducati GP14.2 of Hector Barbera, the Spaniard clearly benefiting from the more level field created with the introduction of the spec ECU and unified software. Barbera, known for his ability to produce a single flying lap, ending fourth with a 1’55.810.

The final rider in the 1’55s was Maverick Vinales (Team Suzuki Ecstar), the young Spaniard over a second faster than his teammate Aleix Espargaro who was 16th. While Espargaro has the fully seamless gearbox, Vinales is still undecided over which to use and is hoping to make a decision before the race.

After several difficult tests, Pol Espargaro (Monster Yamaha Tech 3) turned his fortunes around and was able to finish sixth, and ahead of both the factory Honda machines in FP1. The Spaniard set a 1’56.051 while his teammate, Bradley Smith, ended down in 11th. Smith also suffered a crash at Turn 13, the Brit unhurt in the fall but forced to end his session early.

Teams were able to make several adjustments between the Qatar Test and Free Practice 1, the Repsol Honda Team bringing a larger set of winglets for the opening round. Dani Pedrosa led the Repsol Honda Team charge in seventh, no Honda machines inside the top five as they continue to struggle with the RC213V, especially in Qatar. Marc Marquez was 0.160s back on his teammate, ending the session eighth and 0.810s back on Lorenzo’s time.

Scott Redding (Octo Pramac Yakhnich) finished the session in tenth and led a trio of British riders with Smith and Cal Crutchlow (LCR Honda) just behind.

Unable to emulate the speed of his teammate, Loris Baz (Avintia Ducati) finished the first day of MotoGP practice in 13th but only 1.343s off Lorenzo’s time.

Having worked hard to improve his fitness over the off-season, a lighter than ever Jack Miller (Estrella Galicia 0,0 Marc VDS) was able to improve on his best time from testing almost immediately. The Australian managed a1’54.939 to end the session 14th, a decent result given his still healing leg. Tito Rabat was down in a disappointing 20th and almost a full second slower than his Australian teammate.

Danilo Petrucci (Octo Pramac Yakhnich) was also out on track for the first time since breaking his hand at the Phillip Island Test. He was able to complete 17 laps, but wasn’t as competitive as he had been during the Sepang and Phillip Island Tests as he ended 15th.

Alvaro Bautista (Aprilia Racing Team Gresini) led the charge for the new RS-GP in 17th while teammate Stefan Bradl ended the day down in 21st. Both riders are aware that it will be a difficult year and are treating this first round as an extended test session.

The Aspar Team MotoGP duo of Yonny Hernandez and Eugene Laverty were 18th and 19th respectively.

Full times and sector breakdowns can be viewed here.