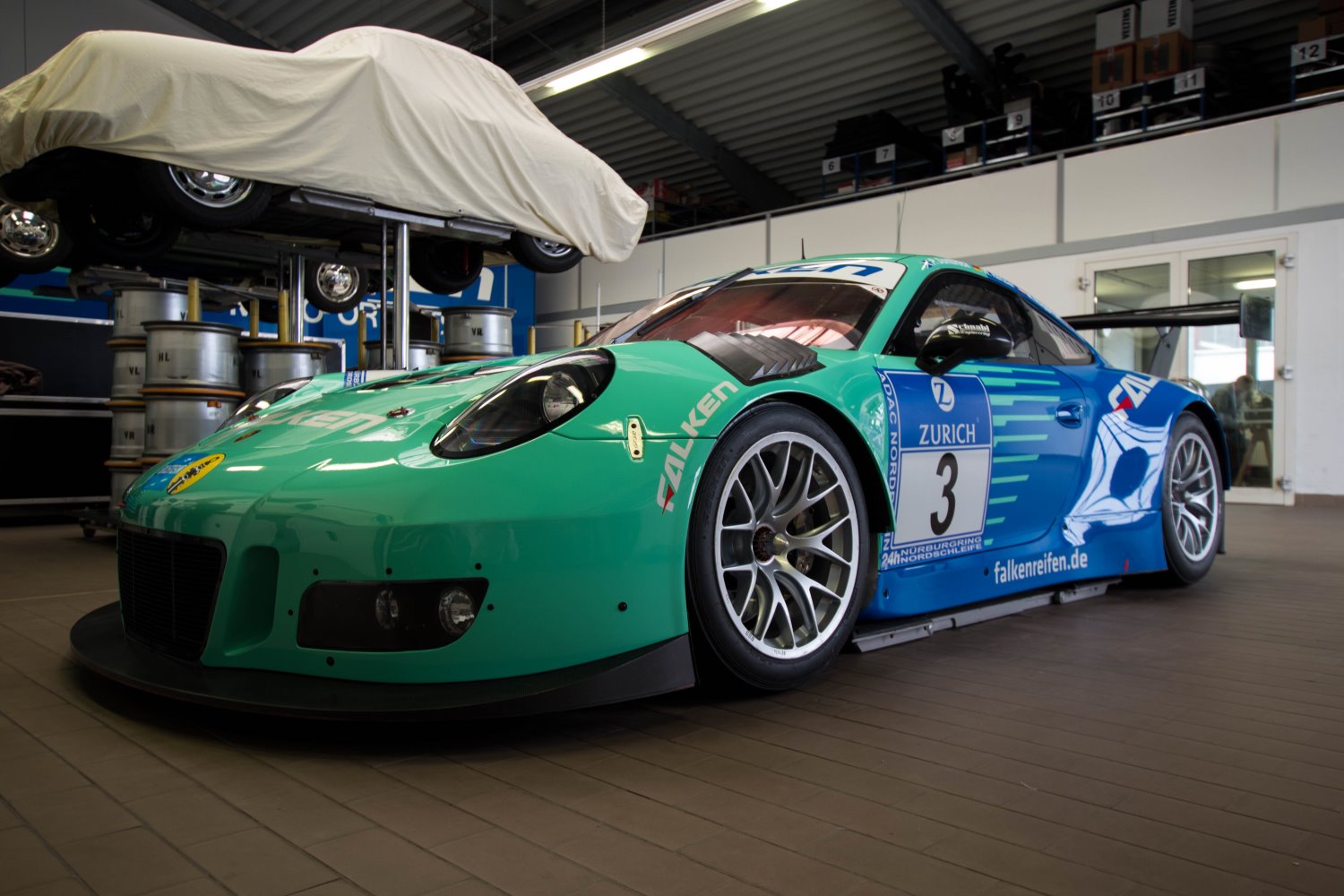 This season sees FALKEN Motorsports taking to the track in a Porsche 911 GT3R (991), fielding a strong and proven line-up for its team of drivers. Wolf Henzler, Peter Dumbreck, Martin Ragginger and Alexandre Imperatori will battle it out for FALKEN, aiming for top three places in the VLN Championship as well as the Nurburgring’s 24h-Race.

The FALKEN Porsche 911 GT3R (991) is powered by a water-cooled six-cylinder engine and has a total weight of approximately 1,220 kg – around 60 kg lighter than its predecessor. The new racer’s wheelbase is 8.3 cm longer, and its center of gravity has been optimized by using advanced lightweight techniques in building the bodywork, chassis and add-ons, aimed at maximizing the vehicle’s performance.

After initial testing in December, a further round of tests was held in mid-February in Portimao, Portugal, where the second-generation FALKEN tires were put through their paces on the new Porsche. In the first round of tests, tires from the preceding 997 model were fitted to the new 500hp racer for comparison. The results of these tests were then used by the FALKEN Motorsports engineers in Japan to design a new generation of advanced motorsport tires tailored to the Porsche.

The team of drivers is delighted with the new tires and the FALKEN Porsche. “A lighter car with longer wheelbase and a few extra horsepower already sounds pretty good to me," enthused Peter Dumbreck about the Porsche 991. “It’s not only the tires that have been advanced since the first round of tests; the new car itself has undergone a whole host of improvements. It’s now easier to drive, the brakes are firmer and the aerodynamics whilst cornering are improved." Dumbreck is equally optimistic about the team’s prospects of gaining a place on the podium: “When we fight for a top three place this season, we’ll be fighting for victory. It certainly won’t be easy. The competition is getting tougher from year to year as more and more factory teams and drivers enter the race and the cars get faster and faster."

For Martin Ragginger, it was love at first sight: “Right from the start, the car impressed me. The new aerodynamics improve cornering speeds, the engine packs a great punch and the brakes are stronger. FALKEN provided us with such a huge range of tires to test that we’ll be able to put together the perfect package of tires and car," he says. Ragginger is convinced that the team’s chances of winning a podium place will be high this season too: “It’s not just that we drivers have grown together into a close-knit team; it’s the whole team behind FALKEN Motorsports that does a great job.".

“We tested the car over 2,300km under conditions that matched what we can expect from the Nurburgring in spring," says Wolf Henzler. “This Porsche is streets ahead of its predecessor and FALKEN’s new-generation tires will enable us to take a further leap towards victory. The car is rock-solid and I’m confident we have what it takes to climb the podium. The 24h-Race is a long, long event where a lot can happen – so we’ll just do what we did last year: drive, drive, drive!"

Since selling the 997 Porsche, Falken’s fans have been waiting for the confirmation that the tyre manufacturer would move to a 991. “The FALKEN Motorsports fan community was buzzing with speculation about the new race car, so we decided to fuel that excitement," says Stephan Cimbal, Head of Marketing at Falken Tyre Europe. “We launched the campaign by featuring the sale of our old Porsche and then added information bit by bit to whip up the tension. It worked really well! Of course we knew some fans had already guessed the new car would be a Porsche – and now their suspicions are confirmed. Personally, I’m delighted that we’re continuing our partnership with Porsche and building on our many successes at Nurburgring with this model’s predecessor."

Further test and set-up runs will take place at Nurburgring in mid-March before the first VLN race is held on 2 April 2016.