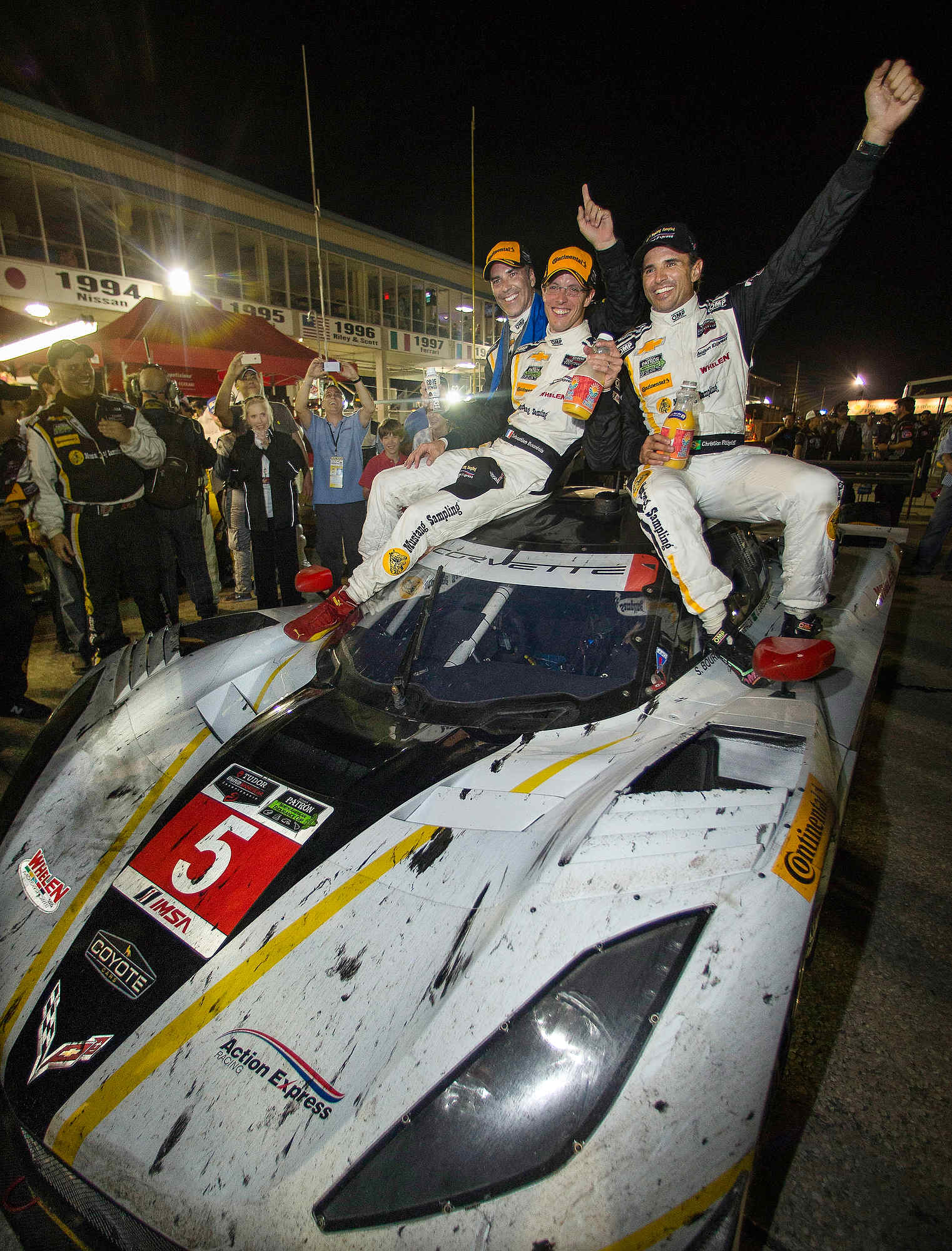 DETROIT — Corvette Daytona Prototype teams return to Florida this weekend for another chance at history as part of the 64th Mobil 1 Twelve Hours of Sebring Fueled by Fresh from Florida. Recreating the magic from last year’s race will be top of mind for the four Corvette DP teams entered as they try to put Chevrolet on the top of the podium for the second straight season.

In 2015, Chevrolet won overall at Sebring for the first time since 1965 with a sweep of the podium. Joao Barbosa, Christian Fittipaldi and Sebastien Bourdais claimed victory in Action Express Racing’s No. 5 Corvette DP to lead a 1-2-3 finish for the Bowtie Brand. It marked the first time in 11 years that one manufacturer finished in all three podium positions.

“Last year’s finish at Sebring is one that everyone on the Corvette Daytona Prototype program will remember for a long time," said Jim Lutz, Chevrolet Corvette Daytona Prototype Program Manager. “A sweep of the overall podium says a lot about the speed and reliability of our Corvette DPs. Sebring is the most physically demanding track we visit. The constant bumps combined with high loads in the faster sections create huge strains on drivers and cars. We have done considerable work before, during and after the recent IMSA test to prepare our teams for this challenge. The results at Daytona for us were solid but we are focused on and expect victories."

A victory would go a long way toward helping Chevrolet win its fifth consecutive Prototype Engine Manufacturer Championship. Since the Corvette DP made its debut in 2012 – first in the GRAND-AM Rolex Sports Car Series and the last two years in IMSA competition. Corvette DPs have won 30 times in 47 races for a 63.8 winning percentage.

Barbosa and Fittipaldi aim to repeat last year’s win in the No. 5 Mustang Sampling Corvette DP, this time with Felipe Albuquerque sharing the first Action Express entry in the second round of the IMSA WeatherTech SportsCar Championship.

Action Express Racing’s second entry – the No. 31 Whelen Engineering/Team Fox Corvette Daytona Prototype – will see Eric Curran and Dane Cameron welcoming Scott Pruett into the fold at Sebring. The latter drove the No. 5 Corvette DP at the Rolex 24 At Daytona to open the season.

Speaking of the season-opening race, a pair of Corvette DPs finished on the overall podium. Wayne Taylor Racing’s No. 10 Konica Minolta Corvette DP finished second at Daytona for the third time in four years. The lineup at Sebring will be the same as the Rolex: Jordan Taylor, Ricky Taylor, Max Angelelli and Rubens Barrichello. The Taylors and Angelelli were second a year ago at Sebring.

Visit Florida Racing – competing in another “home" event – placed third at Sebring a year ago with its No. 90 VisitFlorida.com Corvette DP. The new-look trio of Ryan Dalziel, Marc Goossens and Ryan Hunter-Reay finished third at Daytona to start the year.

The Corvette DP bodywork reflects the Corvette C7 production lineup. At the heart of the Corvette Daytona Prototype is a purpose-built 5.5-liter Chevrolet LS9 V-8 engine developed by ECR Engines.

CHRISTIAN FITTIPALDI, ACTION EXPRESS RACING NO. 5 MUSTANG SAMPLING CORVETTE DP: “The win here in the 12 Hours of Sebring last year was one of the biggest of my career. Certainly my wins at Daytona in the Rolex 24 and then at the 24 Hours of Spa are up there, I had a few big IndyCar wins, but being a Sebring champion is something I’m fortunate to be able to carry with me for the rest of my life. When you look at the list of drivers who’ve won this event its really special company to be a part of. The other special part about winning at Sebring last year was giving Chevrolet their first overall win in over 50 years at Sebring. We’ve been proud to partner with them for the last several seasons and it’s always great to give them wins and championships as a thank you for their support."

RICKY TAYLOR, WAYNE TAYLOR RACING NO. 10 KONICA MINOLTA CORVETTE DP: “Last year was not a clean race. We made three brake changes and were hit under yellow. Managing a second-place finish was like a win after the race we had. Our thoughts this year are that we need a win here at Sebring to set the tone for the season and get some valuable points moving forward. The most important thing will be having a car in good condition with an opportunity to race for the win at the end. Sebring is one of the most physical races of the year and we need to make sure we are as fresh as possible at the end of the race, when the race gets very intense and the drivers need to be at their very best."

ERIC CURRAN, ACTION EXPRESS RACING NO. 31 WHELEN ENGINEERING/TEAM FOX CORVETTE DP: “I’m really excited to come back to Sebring for the 12 Hours. Based on our speed last year with the Whelen Engineering Corvette DP we were really good. We were right on the bumper with the 5 car right until we had a mishap in the pits. This year we’re in a much stronger program. We’ve got a lot of continuity and we’ve meshed really well on the Whelen Engineering side of it. We’re really confident and believe we’ll have a really strong 12 hours."

RYAN DALZIEL, VISIT FLORIDA RACING NO. 90 CORVETTE DP: “We left Daytona encouraged by strong points and a reliable car, but not as encouraged about our pace so it was great to have a good test at Sebring. We’re looking forward to getting back for the race. Obviously we have a Visit Florida-sponsored car, and it’s my home race, so for us it’s important to have a good showing. We feel like we’re pretty quick. We want to put on a good show for all of our Visit Florida guests. We’re encouraged by the speed of the car and hopefully when we get back to Sebring for the race we’ll still have that same we had at the test."

2016 WeatherTech SportsCar Championship – Prototype Standings (After one of 10 events)