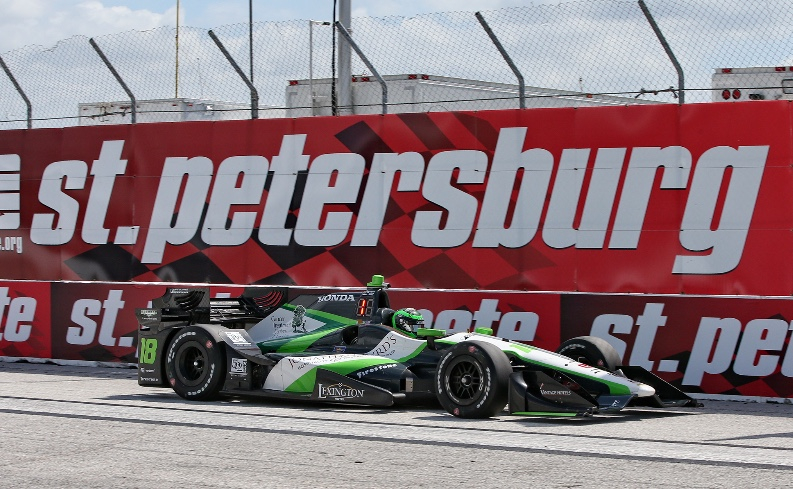 Dale Coyne Racing was on its way to a potential double podium finish in the opening race of the Verizon IndyCar Series season, but the team suffered heartbreaking contact and ended up crossing the finish line 13th with Conor Daly and 20th with Luca Filippi.

Both Dale Coyne Racing drivers and race engineers elected to go with an off sequence fuel strategy to get them up front due to their place near the back of the starting grid.

The strategy quickly paid off as Daly and Filippi were running strong in fourth and fifth following the first pit stop cycle.

The drivers maintained their positions during their second stint, but Filippi got caught out with a full course yellow and was forced to pit for a splash of fuel before returning to pit lane for more fuel, tires and a new nose following earlier contact with Ryan Hunter-Reay.

During the caution, Daly, who had already pitted, took over the lead of the race and went on to lead 15 laps.

While the rookie was running up front, his teammate Filippi was being used as a punching bag, suffering more contact to his #19 Sonny’s Bar-B-Q car that caused him to make an extra stop due to a punctured tire which put an end to his chance of a podium finish.

Daly, who lost the lead to ultimate race winner Juan Pablo Montoya on the lap 64 restart, continued to run strong in second position keeping his sights on the leader, until came time to make what should have been his final stop.

Upon exiting the pits with just under 30 laps to go, Daly came out in the middle of a scuffle between James Hinchcliffe and Carlos Munoz which sent him onto the curb, causing damage to the nose of his #18 Jonathan Byrd’s Hospitality car.

The contact sent a piece of debris into the sidepod and caused a spike in the water temperature, forcing the young American to make an extra pit stop.

Daly went on to finish 13th with Filippi 20th, results that do not reflect the team’s overall performance.

The team will be back on track on Tuesday, March 15th for a test at Barber Motorsports Park.

Conor Daly – #18 Jonathan Byrd’s Hospitality & Restaurant Group Finish: 13th
“We came out of the pits right in the middle of a scuffle and, obviously, we’re on cold tires but the tires come in pretty quick. I thought Hinch was a couple of laps down so I didn’t know he was going to go heavy to the inside. But then Munoz tried to go on the outside of both of us and we’re both already trying to do something, there was no room there. You can’t go three wide there. I don’t know what he was doing exactly and I ended up on the curb and the wheel actually flew out of my hands.

“I had no idea if the suspension was broken or if anything was broken. I kept going and it felt fine and we would have been fine but there was debris from the nose that lodged in one of the sidepods so that caused us an extra stop and that killed our race.

“Other than that, it was fun. It was nice to be out there. We had a bit of luck to get out to P1 but, I thought we really nailed it on that set of Firestone Reds when we got there. The Jonathan Byrd’s Hospitality car was really good on the reds and I was able to kind of just establish a pace but I got caught in traffic a little bit. I need to work on where I apply the overtake and our traction. We’re not good on traction and a lot of people were getting us and it made it hard for overtaking. I mean, there’s a lot to learn, but overall it was nice to fight upfront with the Penskes. That’s the key thing, it’s that we were fighting upfront and they weren’t pulling away. We were right there and we were saving fuel.

“It’s a good place to start. We have to start somewhere. We had all kinds of ups and downs but these are INDYCAR races it’s normal for that. I’m happy with it but you always want more. When we’re running up front, that’s the real feeling that we like. We just want to get back there."

Luca Filippi – #19 Sonny’s Bar-B-Q Finish: 20th
“We had the potential to finish in the Top 5 like Hunter-Reay because I was running in front of him after he made a move in reaction to me and I had a damaged wing. Even with the damaged wing, we still did well but I wasn’t happy with his defensive reaction. Still, we were running well. We changed the wing and we got back in to the top 10 again, even if we were hit from behind. Then on the restart, I just felt a big hit and I had a puncture. At that time, it didn’t go yellow and that was it for us since we had to pit under green. It’s very unfortunate because I felt there was some poor driving this weekend. It’s the first race so maybe everybody got a little too excited but I felt that I wasn’t lucky with the moves the guys around me made. I think we deserved much more. It could have been an easy Top 10, possibly a Top 5, so it’s a shame.

“I knew we had a fast car on the long runs, I knew we had a consistent car so I was very positive for the race, I wasn’t worried at all. I knew that if we had the opportunity to run for a few laps by ourselves we had a chance to get up front and we did it. We now have a good place to start for the street courses. I think it’s looking good and I feel that the Dale Coyne Racing team will do well this year."