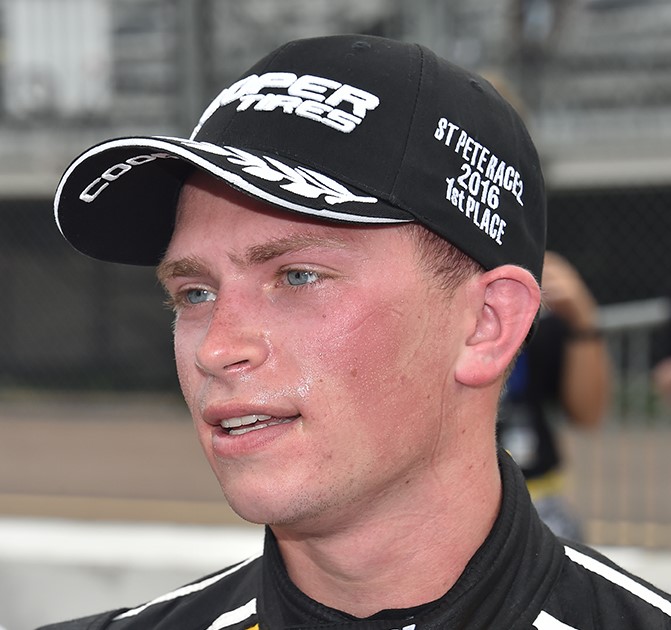 Locally based Team Pelfrey enjoyed a banner weekend in the opening two races of the Pro Mazda Championship Presented by Cooper Tires. After young Mexican Patricio O’Ward claimed top honors yesterday in the first of two races that made up the Allied Building Products Grand Prix of St. Petersburg, today it was the turn of rookie teammate Aaron Telitz to taste the spoils of victory.

O’Ward finished second, while Malaysian Weiron Tan charged up from fifth on the grid to ensure an impressive one-two-three sweep for Team Pelfrey, which is based just a few miles from St. Petersburg in Palmetto, Fla.

All three levels of the Mazda Road to Indy were in action this weekend on the streets of St. Petersburg in support of the Verizon IndyCar Series, with the Cooper Tires USF2000 Championship Powered by Mazda, Pro Mazda and Indy Lights Presented by Cooper Tires each holding a pair of races. There were no repeat winners, highlighting the quality of the competition in all three open-wheel development series.

Telitz, from Birchwood, Wis., started from the pole position in this afternoon’s race and followed the script adopted yesterday by O’Ward by making an exemplary start to take the lead into Turn One. Once again he exchanged fastest laps regularly with O’Ward during the opening stages before making a break after the first dozen laps and then inching clear to win the 40-minute, 33-lap race by a commanding 2.7788-second margin.

O’Ward had to settle for second, although he did gain the consolation of posting the fastest race lap – by just 0.0455 second. That differential was enough to ensure the 16-year-old from Monterrey, Mexico, holds a two-point advantage in the championship points table after two of the season’s 16 races.

Tan, who began the season as one of the championship favorites after winning four races in 2015, made up one position at the start, at the expense of Jake Eidson (Cape Motorsports with Wayne Taylor Racing), then executed a bold pass on Eidson’s teammate, Nico Jamin, the 2015 USF2000 champion, at Turn One on the second lap. But he was no match this weekend for his two teammates and had to settle for a distant third.

Team Pelfrey claimed its second PFC Award of the weekend as the winning team, while race winner Telitz earned the Staubli Award. Tan ensured a sweep of the contingency awards for Team Pelfrey by gaining the most positions during the race and securing the Quarter Master Hard Charger Award.

The Pro Mazda championship will resume at Barber Motorsports Park in Birmingham, Ala., on April 22-24, once again in support of the Verizon IndyCar Series.

Aaron Telitz (Rice Lake Weighing Systems-Team Pelfrey): “Awesome race! Starting from pole is always great. I had a nice getaway at the green flag and led the first lap, even though Pato was really pressuring me. Pato gave me some good looks – he wanted to control the race but I was trying really hard to make sure I kept control of the race. It’s difficult to choose how fast you want to go, because if I had pushed as hard as Pato did early in the race, maybe I could have built up a gap – but then maybe he would have caught me at the end? I was just trying to be as smart as possible. This weekend went about as well as I could ever have imagined it could go – qualifying on pole, winning a race and finishing second in the other."