As the 2016 Verizon IndyCar Series season gets underway in his adopted hometown, news comes of a new book paying tribute to two-time Indianapolis 500 winner Dan Wheldon.

Written and produced by Andy Hallbery and Jeff Olson, "Lionheart – Remembering Dan Wheldon" is a high-quality 216-page book chronicling Wheldon's life, as told by the people who knew him best: his family, friends, teammates, crew members and fellow competitors. 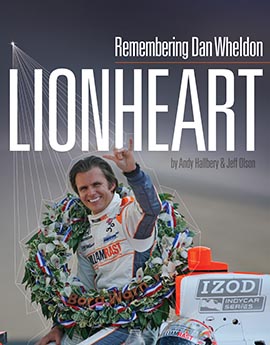 "The response has been truly incredible," said Susie Wheldon, Dan's widow. "It shows just how many people's lives Dan touched and is a wonderful legacy for our two boys, Sebastian and Oliver. I want to say a huge 'thank you' to everybody involved for their dedication to creating this book, and to everyone who contributed, too."

The book covers Wheldon's career from karting all the way to his Indianapolis 500 wins in 2005 and 2011 and his 2005 Verizon IndyCar Series championship. It is filled with stories – some funny, some touching, but all truly captivating. Featured contributions from legendary names within the Verizon IndyCar Series and beyond, including lifelong friend and teammate Dario Franchitti, Formula One champion and childhood karting rival Jenson Button, NASCAR drivers Dale Earnhardt Jr. and Jimmie Johnson, and many more from across the motorsport world.

The coffee-table book will be available to pre-order soon, priced at $74.99. A portion of the proceeds benefits two charities close the British driver's heart – the Alzheimer's Association and the DCW Foundation, created to continue the wide-reaching charitable work Wheldon started.

The book will be published in May during the lead-up to the 100th Running of the Indianapolis 500 presented by PennGrade Motor Oil. Follow www.indycar.com or www.facebook.com/LionheartDW/ for more news and information on how to pre-order soon.