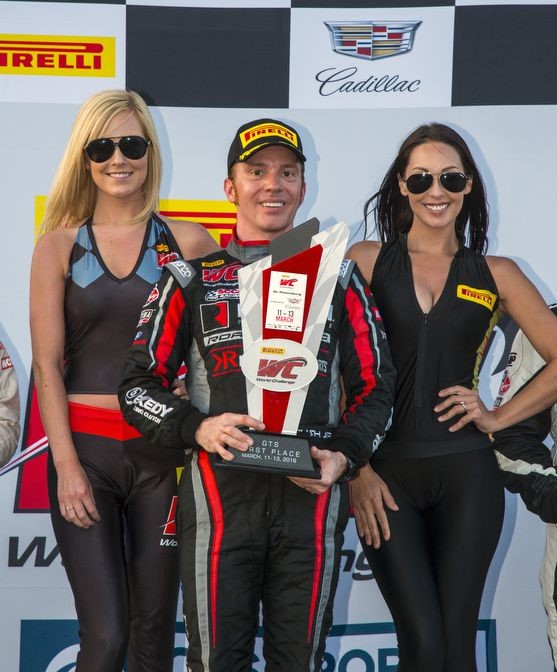 From the standing start, 16-year-old Nate Stacy had a tremendous launch to the front from third-on-the grid into the lead through turn 1. Pole sitter Sandberg, in the No. 13 ANSA Motorsports KTM X-Bow GT4 and fourth-on-grid Lawson Aschenbach, in the No. 10 Blackdog Speedshop Chevrolet Camaro Z28 slotted in behind Stacy in second and third respectively. Roush Jr., who had started second-on-the grid in his No. 60 Roush Performance Ford Mustange Boss 302 followed in fourth.

Race control issued a full-course yellow on lap 6 after contact between Derek DeBoer, in the No. 09 TRG-AMR Aston Martin Vantage GT4 and Mark Klenin, in the No. 62 Schomp/Premiere Copy/Mike Ward Maserati Maserati GrandTurismo MC, left the No. 62 car wounded on the exit of turn 12. Shortly after the yellow was issued, Klenin was able to re-fire his machine and continue underway.

On the lap 7 restart, Stacy launched cleanly to hold the lead through turn 1, as Sandberg, Aschenbach, Roush Jr. and Chaponick Jr. retained their second, third, fourth and fifth positions respectfully.

By lap 16, Chase, who had started sixth on the day, drove his No. 19 Performance Motorsports Group Ginetta GT4 around Chaponick's No. 12 machine and into 5th down the front straight.th

Over the next number of laps, Sandberg started to close the gap to Stacy and by lap 18 the gap was down to .582 seconds. On lap 22, Chase closed on Aschenbach and the two began a battle for the fourth position with passes and repasses for the position between the two.

At the front, Stacy went off course through turn 12 with his No. 14 machine hitting the wall on the outside of turn 13. Race Control issued a full-course yellow to remove the damaged car. Stacy was not injured.

“I came around the turn 11 corner and hit the curb on the inside," said Stacy from pitrow as the race continued. "Then when I landed the steering wheel had no input and I was just along for the ride. I just tried to save it and not hit anyone. Just glad that the KTM (Sandberg) wasn’t close or we both would have crashed. It was my own fault. I just hope that Jack (Roush Jr.) can avenge me and win the race now. Brett was on me pretty hard later in the race and I was hoping Jack could get by him and we could have the Roush finish 1-2 today. It just wasn’t the cards today."

On the lap 26 restart, Roush Jr. rocketed around Sandberg and into the lead through turn 1. Sandberg slotted into second with Aschenbach and Chase in close pursuit. As they crossed the line to complete the lap, Roush Jr. had built a .942 lead over Sandberg, but by lap 29 Sandberg closed the gap and was back hounding for the lead.

With five minutes to go, Roush Jr. and Sandberg were nose to tail and had built a 2.5 second gap over Aschenbach and Chase who were engaged in a heated battle for third. Chase passed Aschenbach through turn 10 at the end of Bayshore Drive to slot into third.

On the white flag lap, Sandberg continued to hound Roush Jr. looking for a opportunty to pass. On the last turn of the track, Sandberg went to the outside attempting to go door-to-door to the checkered but brushed the wall exiting 14. Roush Jr. was able to maintain his position to sweep the weekend and take his second win in a row at St. Petersburg. Sandberg finished second, and Chase third. Pirelli World Challenge veteran Charles Espenlaub, making his 93th series start, finished fourth in the No. 93 AK&J Sealants Maserati GranTurismo MC. Aschenbach finished fifth.

“I didn’t get a good start at all. I got a lot of wheel spin and I dropped to fourth," said Roush Jr. "Then I tried to get the tires up to temperature and be smart in every turn. I was on my marks as best as possible. It was a battle the whole time. A much tougher race than Friday. The late restart was such a rush that I don't remember that much of it. I have a lot of respect with the guys I race with in the GTS class. I didn’t know that Brett (Sandberg) was on the outside in the final corner. I don’t think I touched him. I was just focused on the front and getting to the checkered flag. This is kind of bittersweet today because I thought Nate (Stacy) was going to run away. I really felt bad for him when I saw him hit the wall. He really has a lot of talent and I’m sure we are going to see a lot of great results from him in the future."

“Overall, I am really happy for the crew because they worked very hard all weekend," said Sandberg. "The track had changed today and the car was very loose compared to yesterday (Friday). I was trying to use my car’s advantages on the restart and make moves in the corners. I was hoping Jack’s big V-8 (engine) would get some wheel spin at the restart. He was able to out drag us down the front straight. I was trying to bide my time and get into position to make a move late in the race. At the end of the day, it was hard-fought battle and I gave it everything I had. I thought I had a chance in the final corner by going to the outside. I thought in my mind that Jack doesn’t know I’m here. He got a bit of run coming out of the final turn and I tried to stay on the throttle. But I touched the wall and I had to check up. I think if I had gotten side by side with him we might have bounced off each other. But he had a good run and I had to get off the throttle."

“I fell back at the start as I had a problem in second gear," said Chase. "I had a good battle with Lawson (Aschenbach) and I just waited to find a way by. Finally I was able to throw it into turn one and make the pass. I came here a little nervous because it was my first street course. But in the first session, I seemed to adapt well to the course."

Results are final. Sandberg leads the Driver's Championship points standings. GTS drivers now head to Birmingham, Ala. for Rounds 5 and 6 of the Championship, April 22-24 at Barber Motorsports Park. Watch the expanded coverage of Rounds 3 and 4 from St. Petersburg on CBS Sports Network, March 27, 3 p.m. eastern.