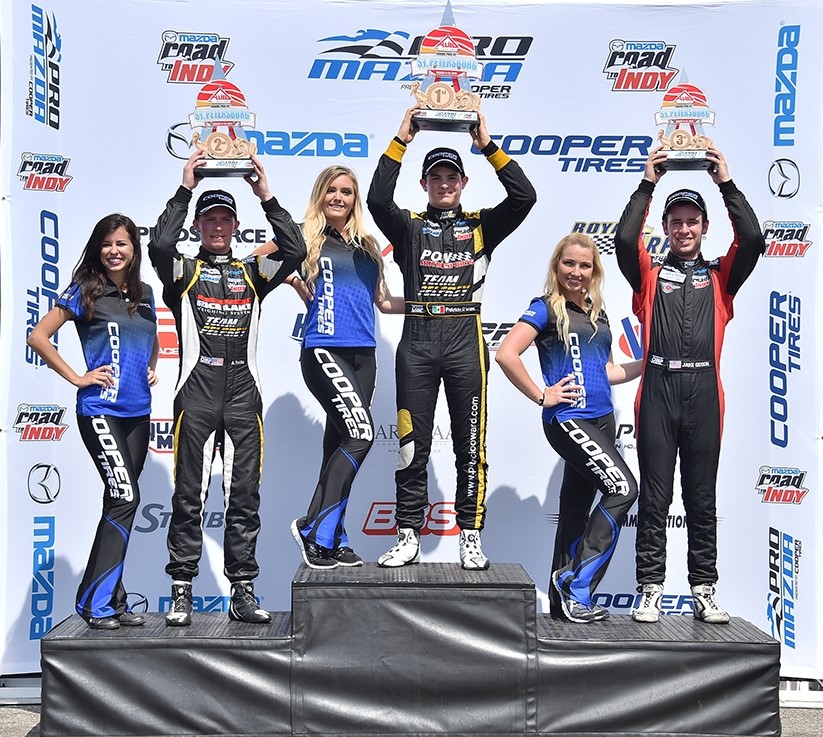 Two weeks ago, Patricio “Pato" O’Ward wasn’t even sure whether he would be competing in the 2016 Pro Mazda Championship Presented by Cooper Tires. After concluding a last-minute arrangement to rejoin Team Pelfrey for the first four races of the season just a few days before last weekend’s Spring Training pre-season test at Barber Motorsports Park, in Birmingham, Ala., the second-year driver romped to an impressive maiden victory in today’s Allied Building Products Grand Prix of St. Petersburg.

O’Ward, 16, from Monterrey, Mexico, had been edged on pace by teammate Aaron Telitz, from Birchwood, Wis., both in Spring Training and in practice yesterday on the streets of downtown St. Petersburg, but when it mattered today, the talented teenager qualified on pole position, made a perfect getaway from the rolling start and was never seriously challenged throughout the 40-minute race.

O’Ward, who finished sixth in the 2015 points table as a rookie on the Mazda Road to Indy, led by a full 1.4 seconds after the opening lap of the 14-turn, 1.8-mile track. He traded fastest laps with Telitz during the opening half-dozen laps before being able to maintain better consistency and gradually extend his advantage. O’Ward finally took the checkered flag 2.7033 seconds clear of Telitz to secure a one-two finish for Team Pelfrey, which is based just across the Sunshine Skyway bridge from St. Petersburg in Palmetto, Fla.

Jake Eidson (Cape Motorsports with Wayne Taylor Racing), who won both Cooper Tires USF2000 Championship Powered by Mazda races last year in St. Petersburg, finished a lonely third on his Pro Mazda debut, followed by teammate Nico Jamin. It was the Frenchman who had won last year’s USF2000 title – and the Mazda Scholarship to graduate into Pro Mazda for 2016 – but Eidson gained some revenge by edging his rival in qualifying, then retained his slender advantage in the race. Eidson took the checkered flag a full 9.6 seconds behind Telitz but remained well clear of Jamin to secure a podium finish.

Malaysian Weiron Tan, driving a third Team Pelfrey entry, finished close behind Jamin in fifth, while pre-season favorite Garett Grist, from Grimsby, Ont., Canada, who scored more points than anyone else during the second half of the 2015 title-chase, including eventual champion Santiago Urrutia, could manage no better than sixth for Juncos Racing. Grist gained some consolation by securing the Quarter Master Hard Charger Award for making up two positions during the race after starting eighth. Mexican teammate Jorge Cevallos drove well to finish close behind Grist, marking a fine return to the sport following an 18-month absence due to illness.

Team Pelfrey claimed the PFC Award, given to the winning team, while O’Ward also earned the Staubli Award.

Pato O’Ward (Gap Guard-Team Pelfrey): “It feels fantastic to win the first race of the season and to get my first Pro Mazda win. It was such a long race that we really had to take care of the equipment. It gets really difficult around the street circuits once you get to the halfway point. I tried to minimize mistakes and keep the rear of the car stable. The Pelfrey team gave me an amazing car; it was super balanced. I really have to keep my game up to have a chance in the championship; I need to keep my focus and get the maximum points in every race."

Aaron Telitz (Rice Lake Weighing Systems-Team Pelfrey): “I was anticipating really struggling for grip by the end of the race so I thought that if I managed my tires better than Pato, I would have a shot at the end. But I didn’t get through lapped traffic that well and wasn’t close enough. It was a little crazy at the start but then we both settled into our groove. It’s important to get every point we can."