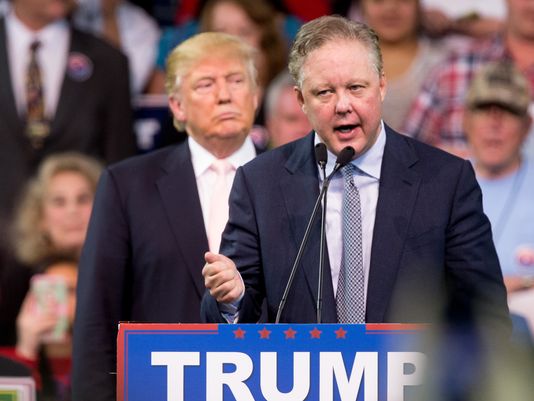 When Brian France endorsed Donald Trump for president, the chairman and chief executive of NASCAR thought of it as nothing more than a "routine endorsement."

He's been dealing with the fallout ever since.

France's decision to personally back the front-runner for the Republican nomination has roiled a sport his family built from the ground up. It's threatened a decade of work to broaden NASCAR's appeal among minorities, upset one of the most powerful teams in the sport and risked a break with the corporate sponsors that are its financial lifeblood.

"I was frankly, very surprised, that my diversity efforts for my whole career would have been called into question, over this, in my view, a routine endorsement," France said Wednesday in an interview with The Associated Press.

France acknowledged he's had to have conversations with sponsors since making the endorsement, which came as NASCAR is seeking a new main sponsor for its top series.

"I made a few phone calls and clarified some things," he said. "That kind of goes with the territory."

France's appearance at a Trump rally the day before last week's Super Tuesday elections fits with the sport's history of occasionally blending politics with the action at the track. France told the AP on Wednesday he backed Barack Obama in 2008 and actively participated in the campaign.

"I supported Obama. I went to his rallies. I parted with my hard-earned money. There was a movement going on, and I was really thrilled with the idea of the first African-American president," he said. "I did the same for Mitt Romney. In both of those cases, I have never agreed with all of their policies."

But Trump is a candidate unlike any other in recent memory, drawing intense criticism for the racial undertones of his rhetoric and policies. The billionaire has called immigrants from Mexico rapists and drug dealers, has vowed to forcibly deport the 11 million people living in the country illegally and seeks to temporarily bar Muslims from entering the U.S.

It's into that cauldron that France inserted himself and his sport. "I'm not supporting him for all of his views, or his immigration views," France said. "I happen to be very enamored by the excitement he's brought and the voter turnout that it is creating."

That excitement is what got Chase Elliott into a jam just two weeks into his new job at Hendrick Motorsports, where he's taking the place of retired superstar Jeff Gordon. To the surprise of everyone at Hendrick, France was joined by the 20-year-old Elliott at the Trump rally in Georgia where he offered his endorsement.

A person familiar with the situation told AP that Elliott, intrigued by the election process, agreed to an invitation from NASCAR to fly on a NASCAR plane to the Trump event in Elliott's home state of Georgia. It never occurred to the rising star to give his team or sponsors a heads-up, the person said, and Elliott realized he was in over his head when he began receiving heavy criticism on social media. The person spoke on condition of anonymity, because the person was not authorized to discuss the details of Elliott's involvement.

While France does not regret his own participation in the Trump rally, he does feel badly for Elliott. "You never want to see anybody get their true positions distorted in the way that has happened," France said.

France is also trying to protect his record on diversity. He said NASCAR has spent "tens of millions of dollars" on a program aimed at boosting the participation of minorities in the sport, among them Mexican driver Daniel Suarez, who has risen to the second-tier Xfinity Series. Some of Suarez's current corporate backing comes from Mexican billionaire Carlos Slim Domit, whose family's company cut ties with Trump after the real estate mogul announced his signature plan to build a wall along the U.S. southern border.

After France's endorsement of Trump, the Lebanese-born Marcus Lemonis, the CEO of Camping World, the longtime title sponsor of NASCAR's third-tier Truck Series, wrote on Twitter: "There is no place for politics/any political endorsements in any business. Your customers and employees should have their own mind. #period."

France's efforts to quell criticism over what he insists was a "personal and private" decision have also been complicated by Trump's continued mentioning of how he's received "NASCAR's endorsement."

On Monday, at a North Carolina campaign rally not far from Charlotte Motor Speedway and the headquarters of many top NASCAR teams, Trump was ebullient in describing his backing from the sport. "You know, I just had a visitor backstage. NASCAR endorsed Trump, can you believe that?" he asked the crowd.

Except it wasn't NASCAR that made the endorsement. It was France.

"We talked to the campaign about the endorsement that I made, versus the sport, and it's hard to get that perfectly right all the time," France said. Houston Chronicle/AP

03/03/16 NASCAR Chair & CEO Brian France yesterday sent a memo to employees of the sanctioning body explaining his decision to endorse Donald Trump for president. The memo, which was obtained by THE DAILY, states, “I often have been involved in supporting political candidates running for public office.

I have known Donald and his family for many years, and it is through this connection that I offered my support." He added, “Let me make something perfectly clear: NASCAR will continue to operate our business unchanged. This includes our deep, long-standing commitment to diversity and inclusion. It’s a commitment that I made to this organization more than a decade ago. We will not waiver from our goal to make our sport more open and friendly to everyone." A request to NASCAR for comment was not returned by presstime.

NASCAR kicks off its three-week West Coast swing this weekend, and the endorsement of Trump is being seen by many throughout the industry as coming at an inopportune time. That is because the West Coast swing includes stops at markets with heavy Latino populations – Las Vegas, Phoenix and Southern California – and many teams had planned Hispanic marketing campaigns for the trip as a result. Whether some or any of those programs had been put on hold following the endorsement was unclear as of presstime. Adam Stern/SBJ