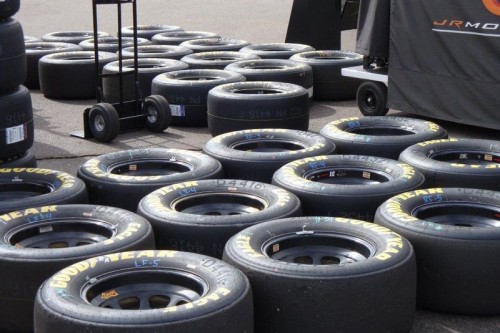 It is the second of eight tire tests scheduled by Goodyear officials and NASCAR for 2016 as part of the 2016 Unified Testing plan.

Selection of teams scheduled to take part in tire tests is based on the previous year's top 20 in owner points, and only full-time NASCAR Sprint Cup Series drivers may participate in a tire manufacturer test.

According to CMS officials, the test is closed to fans. Media will be allowed during a lunch break during Wednesday's test only.

Goodyear officials have said the overall tire selections for 2016 with the lower downforce rules package have thus far resulted in slightly softer compounds for tire builds.

"Obviously we test, we look at all the data, we look at temperatures … lap times, but we're not just trying to go as fast as we can," said Greg Stucker, director of race tire sales for Goodyear. "We're also trying to make sure that we get as much feedback from the drivers as we can to make sure we're landing in the right spot.

"We want to see problem-free racing and something that the guys can manage. … We want to make sure that it's a good, robust package that is kind of predictable. I think you have to look at things as you go through the season and I don't think we'll have a real good gauge until we're a fourth of the way through the season — maybe halfway through — to understand if we're on the right track. And that won't be a Goodyear call; that will be a going through the garage area kind of thing."

The rules package, a version of which was used for races at Kentucky Speedway and Darlington Raceway last season, features a shorter, 3.5-inch spoiler, a quarter-inch leading edge on the front splitter and a 33-inch wide splitter extension panel (radiator pan).