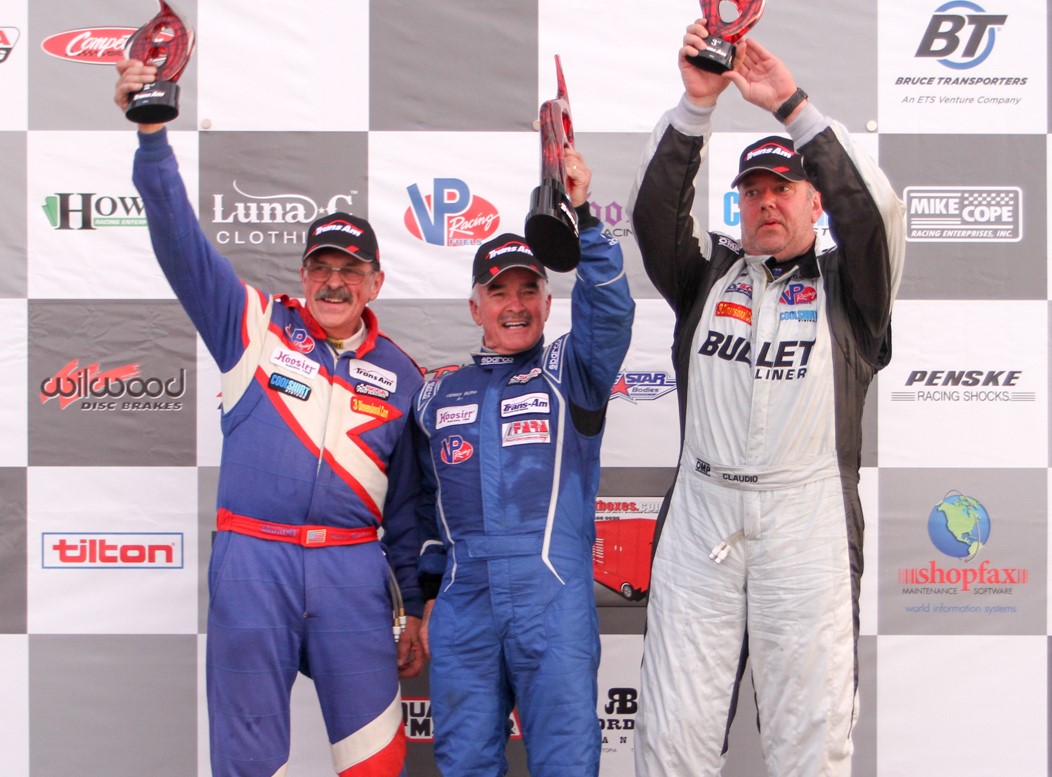 When the dust settled at Sebring International Raceway, Kenny Bupp, Lee Saunders, Steve Kent, Jr., and Mark Boden emerged victorious in their respective classes as Round 1 of the 2016 Trans Am Championship, Trans Am's 50th Anniversary Season, came to a close.

For Kenny Bupp, driver of the No. 80 Hamilton Safe Security Chevrolet Camaro, the TA class victory was a career first in his 14 years and 35 starts in Trans Am as well as his first podium appearance since finishing third at Road America in 2012. The Florida native savored the win surrounded by friends and family, 31 years after he made his first Trans Am appearance. The victory also makes Bupp the oldest race winner in Trans Am history at 79 years of age.

"This is absolutely incredible," said Bupp. "To be here with so many members of our family, and all of Trans Am, which I consider family. I first raced here at Sebring in 1982…I've had a ton of fun here, and in Trans Am, for a long time but never more fun than today! It was absolutely a survivor's race and so much of this comes down to good fortune, but the car was consistent the whole race. We ran into a little brake trouble and ended up having to pump the brakes, but they came right back. The car was perfect; my crew does such a great job, not just today but every time."

The feel good story continues for Bupp, who races in Trans Am in 2016 with his son Jordan, driver of the No. 81 Hamilton Safe Secure Ford Mustang, who finished 15 out of 35 in the earlier TA2 exclusive race.

"It means a tremendous amount to be here racing with Jordan," said Bupp. "Two years ago Jordan had acute kidney failure at the age of 25; he thought his life was over much less his racing career. But for him to come back here, doing nine hours of dialysis ever night, and get back in a racecar is thrilling to me beyond what you can imagine. We're so blessed."

Bupp was joined on the podium by Kerry Hit, driver of the No. 19 Advanced Composite Products Chevrolet Camaro, and Claudio Burtin, in the No. 7 Burtin Racing Chevrolet Corvette, who finished second and third, respectively. The podiums were Hitt's and Burtin's first, seeing the Trans Am veterans off to a great start in 2016.

The TA class saw a myriad of leaders over the course of the race, with RJ Lopez, in the No. 06 Optica Lopez/Republica Brewing Chevrolet Corvette, starting on pole only to encounter transmission failure on the first lap. The incident was only the first of many, setting up a revolving door of TA class leaders that would lead to Bupp's eventual perfect storm.

Amy Ruman, defending TA Champion and pilot of the No. 23 McNichols Company Chevrolet Corvette, led thirteen of 20 laps only to fall victim to track conditions on the 15th lap, spinning on track. Paul Fix, following closely in second position in the No. 50 StopFlex.com/TheCarCoach.com Chevrolet Corvette, tried to avoid the incident but was forced off course and made contact with the wall, ending his day.

Cliff Ebben, in the No. 36 McMahon Group/Stumpf Ford Mustang, would inherit the lead, but only momentarily as a flat tire ended his race as well. With four laps remaining John Baucom, in the No. 86 RoadRaceParts.com Ford Mustang, took over first position and held it for two laps before suffering a mechanical failure of his own.

AJ Henricksen, in the No. 44 ECC/Anchor Bolt & Screw Chevrolet Corvette, assumed the lead for two laps of his own before the No. 44 was contacted and forced off track, ending his day and the race with time and light expiring–leaving Bupp to capture the victory.

As the Trans Am Series began its 50th Anniversary it also debuted its new production racing formats with the TA3, TA4 and TA5 classes making their first appearances.

In TA3, Lee Saunders, 2015 TA3 International Champion and driver of the No. 84 Landsearch LLC Dodge Viper, captured his third consecutive victory at Sebring in Trans Am. However, the effort was anything but straightforward for Saunders who started the race in third position and endured a race-long battle with Randy Mueller, who led the class for the majority of the race in the No. 0 Epic Motorsports BMW M3, and Randy Kinsland, pole sitter and driver of the No. 11 Crossland Motorsports Chevrolet Corvette.

Saunders took the lead with three laps remaining, overtaking Kinsland for the lead, while Mueller completed a surge on the final lap to secure a second place finish, leaving Kinsland to finish third while setting the fast lap for the class, a 2:13.664.

"I'm just so thankful for the win," said Saunders, a Florida native. "Thanks go out to Kevin Smith with KSR and Jamie Frytech, and my family, my mom, my wife, and my two kids for being here. It's always an honor to win here and thank you to all our troops for their service, making it so we can do things like this in our country."

In TA4, Steve Kent, Jr., in the No. 00 XLR8DieselTrucks Ford Mustang, outlasted the surprise entry of Ernie Francis, Jr., a two-time Champion and driver of the No. 98 Breathless Performance Ford Mustang, for the win. Kent began the race on pole but was overtaken on the fourth lap by Francis, who shot forward moving up seven positions in three laps. However, Trans Am officials ordered a drive-through penalty for Francis, ruling he jumped the start of the race, leaving him with the task of moving up through the field once more.

Kent would manage to hold on to the lead despite battling a few mechanical issues of his own, swapping positions with Brian Kleeman, in the No. 07 DWW Motorsports Ford Mustang, over the final two laps before securing the lead one last time with one lap remaining and capturing his fourth career victory.

Francis completed a final surge, moving from third to second, overtaking Kleeman, with one lap remaining as well, securing second on the podium. Kleeman, making his Trans Am debut, finished third; while Francis also set the fast lap of the race, a 2:16.471.

"It was a tough, busy race," said Kent. "We had the clutch go out on us but managed to hold in there and bring the car home."

In TA5, Trans Am rang in the addition of its Porsche exclusive class, giving Trans Am Porsche drivers the opportunity to race on Hoosier Racing slicks rather than the DOT featured in most Trans Am classes.

Kezman would overtake Boden for the first two laps, but the pole sitter was able to gain advantage over his teammate on the fourth lap and retake the lead, one he held until the end of the race. Flynn overtook Kezman for second position on the eighth lap, and the three drivers continued in that order until the conclusion of the race.

For Boden, who marked his debut with a victory, the win was a reason for celebration but also a glimpse at the potential future of TA5.

"I have to thank the Fall-Line crew, the car was great," said Boden. "This was our first race in a new Series on a new tire, and the Hoosier Tire slick was great throughout the race. And thank you to SCCA Trans Am for having us here; I'm really excited about the TA5 class and helping to grow it and getting some more folks out here running with us."

Lee Saunders was also the recipient of the "Cool Move of the Race" by Coolshirt Systems for completing his "three-peat" of victories at Sebring over the past three years.

In total, Trans Am saw 78 cars take the green flag in two races this weekend, setting an event record for the Series.

The 2016 Trans Am Championship will continue with Round 2 at Road Atlanta, Sunday April 10th.

All results are provisional until posted final.