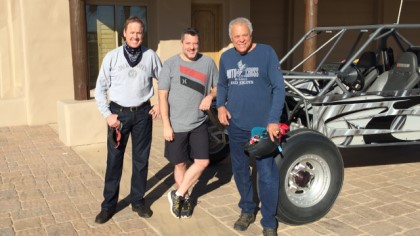 Tony Stewart already has defied his doctor's orders, but there is one order he won't ignore: The order that he won't return to racing until the broken bone in his back has healed.

The three-time Sprint Cup champion said Friday he will be ready to race once doctors give him the OK. He just has no clue when that will come. His first X-rays since the Feb. 3 surgery for his fractured L1 vertebra will be Wednesday, and that will let him know his progress and possibly set the schedule for his rehab and potential return.

Stewart also wouldn't rule out making the Chase for the Sprint Cup in his final season, hopeful that NASCAR will award him a waiver to miss races, just like it did with Kyle Busch, while still requiring a win and a top-30 regular-season finish in the standings to make the Chase. Busch missed the first 11 races in 2015, won four races to make the Chase and then won the 2015 championship. The only difference is Busch was injured during a NASCAR event (an Xfinity Series race at Daytona) while Stewart was injured driving a dune buggy in the California dunes.

"I'll do the best I can," Stewart said at Las Vegas Motor Speedway about trying to make the Chase. "That's all I ever do is do the best that I can. Whatever they decide, they decide and I would like to think it's going to be similar to what they did last year with Kyle. The biggest thing I'm worried about is just getting this heal properly."

Stewart wasn't supposed to be at Vegas, but he was able to lay on his back during the plane ride out and will try to limit his sitting time. His doctors either want him walking or on his back. Stewart came to Vegas to fulfill sponsor commitments for Mobil 1 and to hang out with his team. He also attended the Atlanta race last weekend, standing the entire event on the spotter stand.

While he might appear defiant, Stewart stressed he won't rush his return. Doctors not treating Stewart have said it would take two or three months for his bone to heal from the fracture stabilizing surgery. Stewart said he has driven a street car for more than two weeks and it doesn't bother him although he can't do it for a long period of time.

A crash could cause Stewart to suffer a more serious fracture and spinal injury or the plates in his back could move and cause damage.

"When they clear me to do it, I can promise you I'll be ready to do it," said Stewart, who missed the final 15 races of the 2013 season because of a broken leg. "We've been through enough pain tolerance with the leg and with this, I don't think it is a big problem. … [The X-rays] will give a little better idea.

"This is a little different injury than the leg injury was. The leg injury was much more severe an injury itself, but this is a much more sensitive injury. If this doesn't heal right or we do something that messes it up, it could affect me the rest of my life."

Brian Vickers and Ty Dillon have replaced Stewart in the first three races, and Stewart said that will remain the plan throughout his absence. Vickers will drive the Mobil-sponsored races (the majority of the events) while Dillon will drive the Bass Pro Shops car.

Stewart had previously announced plans to retire from Sprint Cup racing (while returning to his roots for select sprint-car races) after this year and has no plans to change his mind. He broke his back Jan. 31 on a drop of 20-25 feet at 5 mph while driving a dune buggy in California.

"These were the cards we were dealt, and it was a weird accident that nobody ever thought would happen," Stewart said. "I can't even make the story of how I got hurt sound cool. … I wish I could tell you the story I was jumping a 50-foot gap at 60 miles an hour, it flipped over, it caught on fire and I broke my back.

"I went over the lip of a dune and went down 20-25 feet and landed like a lawn dart and broke my back." espn.com