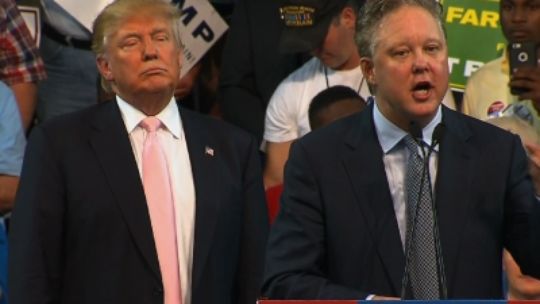 NASCAR CEO Brian France's endorsement of Donald Trump Monday generated a response from at least one of the sport's champions of diversity.

Marcus Lemonis, CEO of the Camping World truck series, tweeted: "There is no place for politics/any political endorsements in any business. Your customers and employees should have their own mind. #period."

Last July, Lemonis — who hosts a CNBC reality show "The Profit" — wrote a letter to France threatening to boycott a postseason awards ceremony that had been planned for the Trump National Doral in Miami. Trump, the Republican frontrunner for president and no stranger to reality TV himself, announced plans to build a wall at the Mexico-U.S. border and said of Mexican immigrants: "They're bringing drugs. They're bringing crime. They're rapists. And some, I assume, are good people."

That prompted Lemonis to write France of his concerns of "recent and ongoing blatantly bigoted and racist comments from Donald Trump in regards to immigrants of the United States." NASCAR moved the event away from the Trump resort.

Eight months and some controversies later, France and several racing drivers joined Trump on stage at a rally in Valdosta, Georgia, one of 12 states voting Tuesday in presidential primaries and caucuses.

France was joined by NASCAR racing legend Bill Elliott and his son Chase, plus drivers Ryan Newman and David Ragan.

"I've known Donald for over 20 years," France said. "You know about his winnings in business, his success. I'm here to tell you: He wins with his family."

France said anyone would be proud of the children the thrice-married Trump has raised.

"That's how I judge a winner: How somebody manages a family, raises a family," France said.

Bill Elliott added: "We need a change, guys. That's all there is to it. I think this is the man for the job."

Trump shook their hands. As they exited the stage, Trump added: "That's cute. They just said keep that wall going. And we're gonna keep the wall going, believe me."

Trump later tweeted that he had gotten the "endorsement of Brian France and @nascar."

David Higdon, a NASCAR communications vice president, clarified in an email that the endorsement was France's, not NASCAR's.

Jaime Katz, a Chicago-based equity analyst with Morningstar, wrote in an email this morning:

"Yes, he fortunately was not telling anyone else how to vote, just offering his own opinion of the best candidate. All voters are entitled to their own opinion. As long as ISCA is not funding the candidacy, it shouldn’t reflect on the stock. I don’t think ISCA is attempting to curb its diversity–its been a push they have talked about for years now."

Trump didn't seem to hold that against France when he introduced him on Monday.

"He's getting pretty dapper," Trump said. "Used to be on the beaches of Daytona. Look at him (in a suit and tie). Brian, we love you." Daytona Beach News Journal