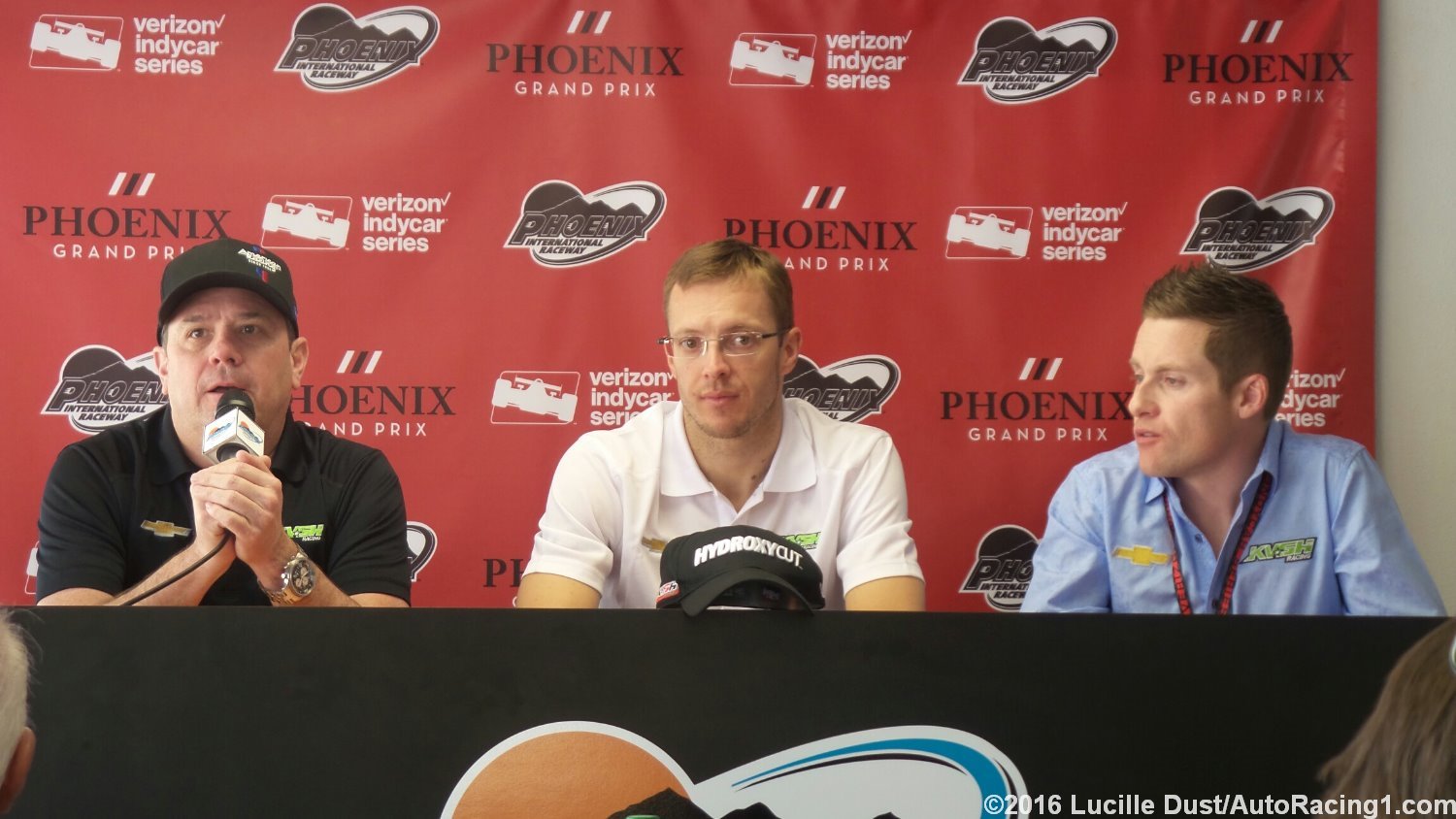 Jimmy, we'll start with you, a very exciting announcement this morning that Hydroxycut will be the co-primary sponsor for your season and that you'd be returning Sebastien to the team. How did this relationship continue, and what can we expect from 2016?

JIMMY VASSER: Well, it's probably the worst-kept secret, really. It's not a surprise to us that we were going to contest the series with Sebastien, particularly after the last couple of years. We really feel that we're in a position to fight for the championship. We had one win two years ago, two wins last year, in the championship going into the mid-Ohio race and it kind of all went downhill from a yellow flag there that ruined our track position, and it really didn't finish the season strong. Even running fifth in the points up until the penalty at Sonoma that I thought was a bit shady, Graham was not — wasn't innocent from any of that. So I really do feel we're in a position to fight for the championship.

We all know on the team we've got to work on our ovals, but having said that, we also know that when the car is right, Bourdais can practically lap the field as he did in Milwaukee.

We're excited, and I'll let Sully talk a little bit more about the sponsorship package and the Hydroxycut component.

JAMES SULLIVAN: Yeah, thanks, Jimmy. It goes without saying that none of this is possible, obviously, without Hydroxycut, so thanks to our good friends there. We're going on our fourth year with those guys now, and the interesting thing about it is when you look at it there, they're almost on their way to being a legacy sponsor in the sport. They're no target with 13 or 14 years, but we've got lots of years with these guys and had a lot of success with them, and we're pretty excited about this being the next chapter with Kevin, myself and Jimmy and Seb. So good things to come this year, and it's a great day for us.

THE MODERATOR: Sebastien, your third season with the team and your relationship with them continues to grow as well as the success of the team with you behind the wheel. As that success continues to grow, what can we look forward from 2016 from you as a driver, as well?

SEBASTIEN BOURDAIS: Yeah, it's great that we can finally make that an official news, but we've been working towards 2016. Sully has been working really, really hard with all his partners and Jimmy and Kevin to make this happen, and I think people underestimate how challenging it is to find a budget to run these kind of programs, but we did put it together, and although it may be a bit late, we're still in pretty good shape and building off of two strong years.

Obviously we're just thinking to just take it to the next step. There's a lot of potential. We've got a really good relationship with Olivier and myself and a lot of very good guys on the team, and just really excited about the prospects for '16. There's no hard way to it. I think the aim is to just always do the best we can. When we can win the race, we'll win the race. When we've got to take a podium, we'll take a podium, and when it's just a top 5 or top 10, we'll do the same. This series is all about consistency and being committed to the effort of the program, and I think this year being able to really focus everything on one car and not get any distraction is a big help. I'm definitely looking forward to it and thankful to Hydroxycut for coming back with us.

THE MODERATOR: Like you said, it's a fairly young relationship between the three of you and also Kevin Kalkhoven, but at the same time so much success for essentially a one-car team. What is it about this team that has made you have all the success that it's still in the relationship?

SEBASTIEN BOURDAIS: Well, it's always the people, whether it's the commercial part, the sporting part or the engineering side. Like I said, we've got a lot of very experienced, very talented people in the organization. We know Penske or Ganassi, but we can be as good or better on any given game when we get our stuff together. That's really the challenge for me that I relish.

I've been on the side of being expected to win because you're in the big teams, and that's what you should be doing, but to be able to do it with a small organization and sometimes a fraction of their budget is just a very awesome feeling, and it also proves how competitive the series is in IndyCar, and thankfully there's not too many boxes that get crazy enough that even the smallest team just cannot get it done. It's harder, but when you get it done, it's very gratifying, and I think it's all to the credit of the people in the organization.

Q: Jimmy, can you talk some about the decision to maximize what you have with Sebastien this year and just be a one-car effort?

JIMMY VASSER: Well, let's be honest; we've tried to stay a two-car team for financial reasons, really, and we always think that we're going to try to add the right driver to complement our main effort, and over the last few years it just really hasn't happened. Maybe we've been trying to fool ourselves, and it just turns into more of a disaster, really, and a distraction. We were trying to maintain two leader circles and at other times three leader circles, and that was really for economies of scale. The business works better from a financial standpoint with more cars, but we keep trying to do that and we keep shooting ourselves in the foot, really, and coming up short, and that puts pressure on the whole team, it puts pressure on the primary car effort, and even — we made a decision that if that's the case that we liked it, but we were still trying to do a second car just up until recently for financial reasons because it is so difficult to balance the ledgers and to make it all work. But from a competitive standpoint, we all realize that it's going to be the best for the No. 11 and Sebastien, but consequently it's going to be much more expensive, but we put — to coin a phrase from Kevin Kalkhoven, but we all the wood behind this one aero and all our resources, Sully from the commercial side selling one thing, and even as hard as we tried to keep everybody together over the last season, unfortunately we did lose some key components, and that's disappointing. We all realize that, but that's behind us now, and we're 100 percent focused. We do still have some holes to plug in the team, but the main component starts with the driver, and Bourdais is a proven great champion, legend in the sport, and we've been able to keep him with his engineer that has been with us now — Olivier has been with us, I don't know, I think it's been eight, nine years. He came to us without a work visa and we worked hard to get him one, and he's from France but he's almost an American, and his crew chief. Ernie has been with us for a long time, as well.

From there, we still have some holes to plug in the team, but we will fight, and that starts in the driver's seat, and we're happy to have Sebastien back.

Q: Can one of you address the on-track one-year deal? Is it a one-year or multiyear contract?

JIMMY VASSER: It's a one-year extension to what we have, and hopefully we're able to add to that and build for multi years in the future, but that's going to come from us securing commercial partners to do so and then Sebastien deciding if he wants to stay with us and this is a team that he wants to be with in the future. It's certainly a goal. We're not ready to put him out to pasture.

JAMES SULLIVAN: I think it's one of those situations where it's built into our business model, and whether it could or could not operate in the future, sure, it could operate, but under what circumstances and given what timing. If we were kind of thrown that curveball, if you will, if you want to call it that, a month or two before our season starts, I think it would probably be a problem. If it was something that everyone got in a room and you looked at it and said, hey, could this work, I think anything could work if all the stakeholders were in a room putting their minds together.

But the short answer to your question is that it's become part of our business model. At the end of the day, we all rely on it to get there. We're certainly not taking that money home and leaning on it. The team is living on that money. It's a big part of what it takes to have our trucks get on the road.

Q: Sebastien, you had your first opportunity to get in the car here yesterday in Phoenix. How did it feel? How is it going to be stacking up?

SEBASTIEN BOURDAIS: I think it's still very early days. You see the modifications on the Chevy aero kit are a lot less significant than it is on our opponent, but in the meantime, it seems to be still very competitive from what we saw last night, and you know, just trying to understand how things work, get to grips with the track. It's a very, very grippy place. We're pulling over five G's, and it's a big commitment on such a place like this when you start to average speeds over 175, and I think everybody is definitely having to commit pretty deep into putting a lap together and keeping the foot down.

I think it's a big wake-up call when you haven't been in the car in five months. It took me quite a while to actually convince myself that I was fine to do that, too. But just to give you an example, Milwaukee would be three and a half G's, not five. So it's a big commitment, and big consequences if you get it wrong. You just kind of take it one step at a time, and it's a fun place, but you've just got to make sure you don't make a wrong assumption, I guess, because that could be pretty costly.