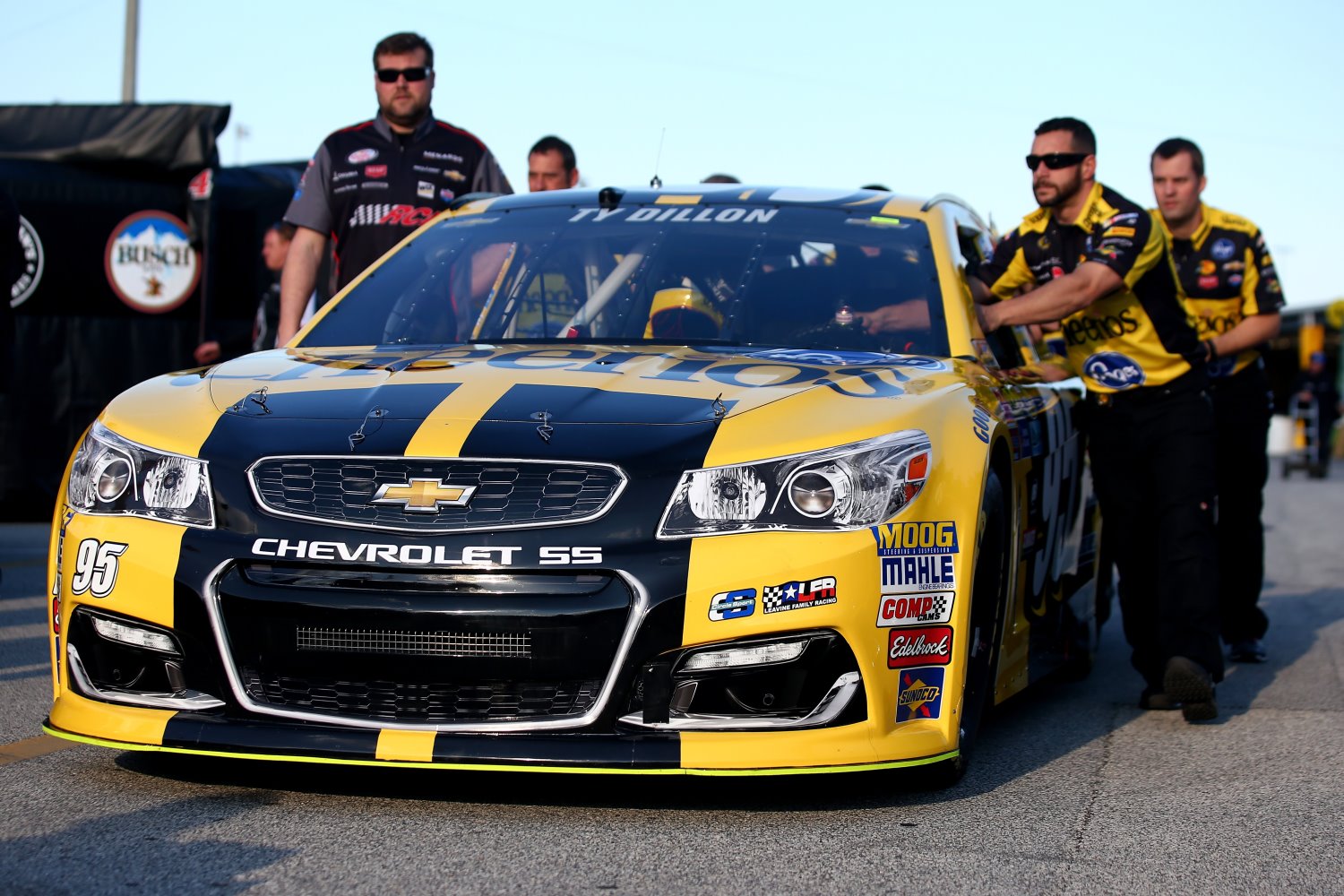 Twenty-five drivers hit the track for Wednesday's second session with all eight drivers who skipped the day's first practice bringing their cars out for the later one. Originally slated for 45-minutes, NASCAR granted the field an additional five minutes after a multi-car wreck interrupted the second session.

After dealing with oil on the 2.5-mile track — which brought out the red roughly 20 minutes into the session — 2016 Rookie of the Year candidate Brian Scott topped Wednesday's final practice. The wheelman for the No. 44 Richard Petty Motorsports Chevrolet posted a fastest lap of 199.800 mph.

Ty Dillon's No. 95 was the culprit of the leaked oil after his oil cooler cracked on his Chevrolet. This triggered a crash involving Ryan Newman, Michael Waltrip, Kyle Larson, David Gilliland and 2015 NASCAR XFINITY Series champion Chris Buescher.

"The 95 sprung a leak in front of us and it was just a chain reaction of events," Ryan Newman voiced. "It wasn't Michael's (Waltrip) fault."

Austin Dillon was able to avoid the on-track wreck and scored second on the leaderboard after propelling his No. 3 Richard Childress Racing Chevrolet around DIS at 199.769 mph. 2015 Sprint Cup Series Champion Kyle Busch was right behind him, posting the third-fastest speed on the clock (199.729 mph).

On-track action will pick back up on Thursday with the Sprint Cup Series final practice (Noon, FS1).

Michael McDowell topped the leaderboard for Wednesday's first practice at Daytona International Speedway, wheeling his No. 59 Circle Sport-Leavine Family Racing Chevrolet at 200.173 mph for the fastest lap of the 45-minute session. McDowell was the only driver to break the 200 mph mark during the session.

Polesitter Chase Elliott finished eighth on the leaderboard with a fastest lap of 198.286 mph.

“The oil cooler cracked. I really hate it for those guys behind us. It’s just one of those weird situations. I hate that it tore-up race cars. I couldn’t do anything to make it any different. We were just getting the pack going. It was unfortunate for everybody involved. I hate it for our guys that our race car is torn up. It’s just as simple as a cracked weld on an oil cooler. Hey, we didn’t catch it early enough. It’s unfortunate but we’ll be fine. We have time to get everything fixed and I just hope the other guys do, too."

“Something happened to the No. 95 (Ty Dillon) I saw the oil up ahead and I started checking-up. It’s amazing how quick the oil spreads out as it sprays out and it was like ice out there. I tried to keep it (the car) off the wall and even when I got back on the race track it was slick and we just kind of bounced off the wall in the Caterpillar Chevrolet."

DO YOU HAVE SIGNIFICANT DAMAGE TO THE RIGHT FRONT?

“The tail section mostly is just body work but the right front is up against the frame bar just a little bit. It looks entirely fixable; that was (crew chief) Luke’s (Lambert) comment before we ever got it back into the garage. So, we’ll see."

KYLE LARSON, NO. 42 TARGET CHEVROLET SS – Involved in a multi-car crash in Turn 2

WHAT HAPPENED FROM YOUR PERSPECTIVE?
“I could see him (No. 95, Ty Dillon) smoking. Obviously oil was getting put down. I was just following the guys in front of me. The whole line of us kind of just moved up, so I just followed them. We all just kind of got stuck in his oil. The front guy slowed down and then the rest of us couldn’t get slowed down in time. Just kind of a chain reaction. I got shoved into the wall, no fault of the guy behind me, but it’s unfortunate."

WHAT ARE YOUR THOUGHTS ON GOING TO A BACK-UP CAR FOR TOMORROW’S DUEL RACE?
“It will be fine. You hate to wreck one in practice here because you kind of assume you are going to get some damage tomorrow. We will probably have to send down our Unlimited car now as a back-up for this one. But, they say the car that we will run in the Duels and hopefully the 500 is just about the same as this primary car that we had."

How bad is your Camry after the accident?

“Yeah, the front end is bent a bit. I know the guys have got an excellent set of tools and I believe they can straighten it out – I hope so. I think our backup car is pretty much in a lot of pieces – it’d take a lot of Maxwell House coffee to get them through the night to fix that one up, so hopefully they can bend No. 83 A out and we’ll go again."

What did you see?

“I saw the 95 (Ty Dillon) or 59 smoke a little bit and Ryan (Newman) let off the gas and I let off and whoever was driving 35 (David Gilliland) must have not seen it and Ryan let off and I bumped him and then they bumped me and he got bump – it was just chain reaction. You’re going so fast and it happens so quickly that I didn’t have a chance not to bump into Ryan and I’m glad he didn’t hit anything and unfortunately I did. I had it cranked to the left trying to keep it off the outside wall, but that didn’t happen and we’ve got some damage, but hopefully the boys can get it turned up. I think that we’re going to have some fun in the Daytona 500."